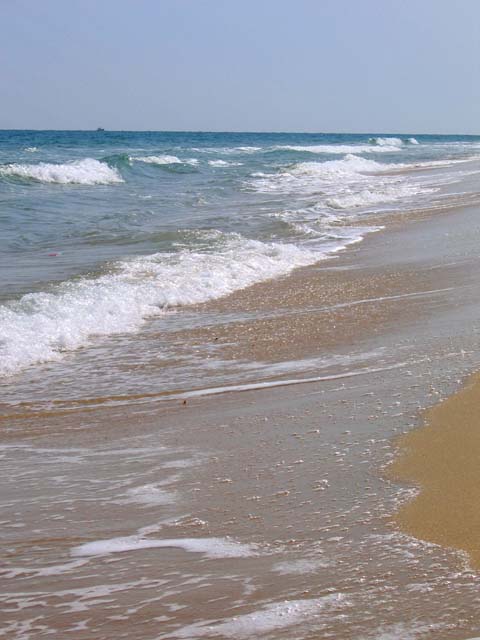 published in the Palestine Chronicle   By Eva Bartlett

The days are searing heat and sweat-drenched clothing. Most people stay indoors, in air-conditioning, or under shade. Near the sea, tents and umbrellas provide relief from the sun, and the breeze brings both soothing sea air and the lulling ocean rhythm. In the water, everyone is a child, re-discovering buoyancy and the thrill of waves. The squeals of children and adults alike do not mar the tranquility.

Early morning provides quiet contemplation, only labourers and vendors moving about, preparing for the day. The night owls who’ve stayed up drinking tea, smoking nargila and adoring the sea under starry skies recuperate for the coming evening. Morning is a time for a quiet swim and uninterrupted contemplation. If awake very early, one can watch the sky awaken: puffs of clouds with streaks of daybreak sliced through are illuminated in the deepening blue sky.

Dusk brings contemplation of a different sort, in groups rather than alone, marveling at the sunset –how impossibly quickly that blinding sphere turns burning orange and dips out of view. Dusk satiates, complements a day spent in the elements –sun, breeze, water –and promises cool relief. It is often accompanied by the tempting wafts of onions, tomatoes, garlic, eggplants, and meats being grilled on the beach.

A picnic on the beach is a communal event, laden with music and a sagging table. Ravenous from the sea air, one devours with hungry pleasure. Sun gone, the sky rapidly changes from amber-streaked to fading blue, soon-after hosting brightening stars and puffs of nargila smoke. Apple-flavoured waterpipe melds beautifully with mint tea, better with merrimea tea, that wild plant tea-addition favoured by Palestinians.

Today, as dusk approaches and the sun descends to what appears to be just metres above the water, I wonder: how have Palestinians in Gaza enjoyed their day? Did they get enough to eat? Was it only starch? Can they enjoy grilling vegetables, or are the vegetables so scarce, or so poisoned by polluted groundwater that this is a dream? Do they even have gas for cooking, or can they scrounge some driftwood and scraps to burn? Are more and more children becoming anemic? The Palestinian Health Ministry puts 70% of the population as anemic, with malnutrition among children specifically having increased to over 10% in the last year. Is this affecting the development of their brains, their intellect, their creativity, their future?

Gaza wasn’t bombed today. That’s at least a blessing. But I know that in Northern Gaza, where water treatment is impossible without power or fuel, the beaches aren’t swimmable, the water not drinkable –I’ve read, in a UN report, that at least 75% of the drinking water in Gaza is polluted.

I know the beaches weren’t enjoyed with the same unabashed reverence and carelessness as here in safer lands, although it is the same ocean, looks like the same coastline. I read the WHO report stating 13 areas along Gaza’s shore are polluted and dangerous to swim in. Yet, I know that many take the risk anyway –what do they have to lose? they think, and what other pleasures are there under siege, with no where to go, no way to leave? –and swim in water which has been found to contain fecal bacteria and E Coli –which can cause urinary tract and digestive system infections, giardia, dysentery, cholera –because they seek relief from the siege, the imprisonment, the heat. I know that the UN cited 50-60 million litres of sewage being pumped into the sea, rather than having it overflow into villages again and kill residents again. I remember hearing about the overflow of waste in northern Gaza in March 2007, when five were killed, including two babies, drowned in sewage, in a catastrophe that the UN predicted but that was unpreventable, as building proper sewage containment has been impossible under siege and under Israeli fire. And that the stagnant untreated sewage pools provide the breeding ground for various insects, which gives rise to numerous skin infections.

I know that along Gaza’s coast fisherman are being prevented from plying their trade, due to Israeli warships which hover and patrol Gaza’s water, infringing on their rights to fish, routinely firing on Palestinian fishermen in Gaza. I’ve read that licensed and seaworthy boats which previously supplied a vital source of income and nutrition are now docked, meaning the 3000 fishermen who worked them are jobless and without an essential food source.

By the time I reach these conclusions, the sun has set, the evening beginning. Some ships in the distance remind me that two days ago, two boats carrying 44 internationals, including a Palestinian with an Israeli ID, and a Jewish Israeli, broke Israel’s utter control of all Gazan points of entry and successfully arrived in Gaza to meet a people who welcomed them with smiles, laughter, open arms, and friendship. These are the people who are under siege; these are the people who can teach others a thing or two about dignity and loving freedom. 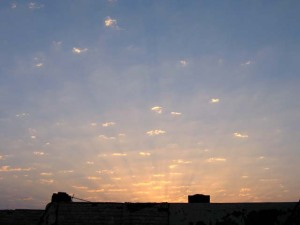 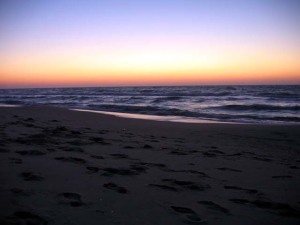