Heavily armoured Israeli bulldozers enter the Gaza Strip, driving across farmland in what locals say is a routine event, happening twice every fifteen days (once in each direction).

Called to Khosar by a family with farmland in Israel’s so-called ‘buffer zone’ –a band of land extending anywhere from 150 m to 1000 m from the border with Israel–we, as international human rights observers, intended to accompany the farmers as they plowed their land for planting.

Mohammed Suleiman explained the recent history of devastation his land, and animals, has faced.

On September 6, 2006, Israeli forces entered with bulldozers, destroying 5 dunums (1 dunum= 1000 square metres) of 15 year old olive trees, 2 dunums of orange and lemon trees, the kitchen and the bathroom of his home, the cow shed, with 7 cows inside, and 200 turkeys and 100 breeding pigeons in the process.

Like most in his position, Mohammed has no place to go, no option of leaving the area which has been his home since birth. He chooses, instead, to re-build after each incursion and demolition.

On November 27, at around 10 am, as we sipped tea before readying to accompany the farmer plowing his land, 2 oversized, armoured bulldozers appeared, moving along the border on the Israeli side of the fence. Even from 600 metres away, the bulldozers are towering, massive hulks of machinery designed to tear apart buildings and anything in their path. A tank soon showed itself behind the bulldozers. Moving south, the trio entered a gate in the wall and crossed onto Palestinian land.

The Israeli army had invaded Gaza at various times in recent weeks, so fearing another invasion, the farmer called off the plowing and turned around his tractor. Instead, monitoring the movement of the tank and bulldozers from a safe distance, we followed as they moved north along the wall, about 100 m out. With their worrying continued progress north, we called to warn a farming family living in the direction of the army’s movement.

As we traveled along, on the back of the resigned tractor, Fadi, one of those farming, acted as our tour guide, a tour of destroyed houses and ravaged farmland.

“Those were olive trees. Over there were orange and lemon groves. It was all farmland,” he summarized, waving his hand in broad gestures to encompass land surrounding us. We passed by remnants of former houses, rendered skeletal by the dozers.

And ironically, as our tractor moved away from the land it would plow, across the fields and beyond the fence, on the Israeli side a tractor moved back and forth, working the land unimpeded, as a farmer should. We could see the bulldozers continually moving north, eating the soil where they previously ate the trees.

It hit me yet again: the absurdity of life for a Palestinian, in the West Bank under occupation and facing settler brutality, or in Gaza, under the strangling siege on life. It is absurd because the acts Palestinians are trying to perform are those feats of life that enable people to grow food, study, catch fish, survive. And they are systematically being interrupted, prevented and denied.

Absurdity lies also in the realization, again, that for children this life is ‘normal’. It is normal to walk home from school and see gargantuan bulldozers crossing agricultural land, tanks in tow. It is normal to expect F-16s to fly overhead, and to not even have to look upwards to identify their sound from that of a drone.

Our tractor took the village lanes, past a mosque where an old man with a weathered face sat watching us without expression. We passed a motorcycle with a teddy bear strapped to the handlebars.

And so normal are the invasions and presence of the Israeli military machine on Palestinian land, that none of the urgency we felt to follow and document was felt by our farmer hosts, who urged us instead to sit and rest, to drink tea. While we pushed to hurry on, they insisted on making our travel more comfortable. Off went the plow blade, on went a large box-shovel, swept out with care, with a mat placed inside. Royal treatment, hospitality being more urgent than the possible invasion.

Our revamped ride passed the pre-school which, 3 months before the June truce began, Israeli special forces occupied from 9pm until the early hours of the morning. Israeli sharp-shooters aimed from windows and pegged off passersby, 14 civilians in total.

Across the fields and beyond the fence, an Israeli crop-duster circles in wide arcs, spraying the fields.

Finally reaching the farmer friend’s home we had worried about, we saw that the dozers and tanks have moved on, two tanks on the other side of the fence having joined the original first, and are continuing north.

Our friend was non-plussed.

“That’s normal. They passed by in the other direction two days ago. They do this every 15 days or so,” he explained.

We cleaned radishes again, as he continues to try to live a normal life, although normalcy has been long since turned upside down. 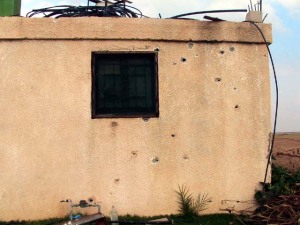 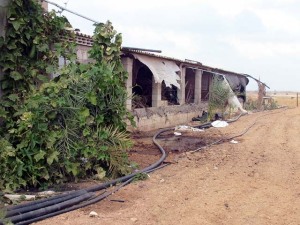 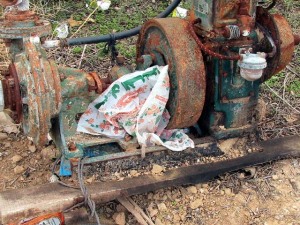 he tries to work the land, a nearly impossible task with Israeli soldiers ready on the other side to shoot, even though it’s hundreds of metres away.