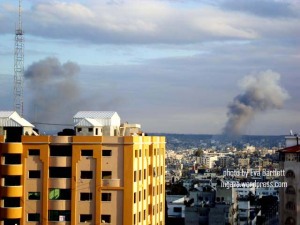 From a news building’s height, I can see the black clouds from recent strikes.  To the north, in Jabaliya, a Hamas leader’s house has been hit, taking down 4 story’s and the occupants inside.  In addition to the Hamas leader, Nizar Rayyan (50) estimates of at least 10 family members, including children.

To the east, 2 different plumes, the most recent resulting in what TV images soon show to be a burned child’s corpse, the first of the dead shown.

“They’re going crazy,” the newsmen say, stating it’s beyond anything they’ve seen before. They are from Gaza.

Reporter Yousef al Helo estimates there could be over 100 drones circling over the Strip, some taking photos, others dropping missiles.

3:53, new airstike in the east of Gaza city, on agricultural fields, but civilian deaths are restricted to dense camps or city streets.

4:06, at least 4 new strikes in the eastern and northern areas outside Gaza city.

4:13: three more, in quick succession, along the east of Gaza city. 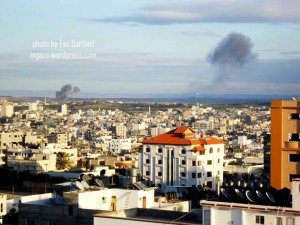 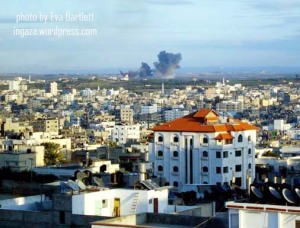 Last night, staying at Al Quds hospital, I was afforded a very up-close experience of shelling from all sides. The hospital lies between the already-bombed Ministerial Council building complex and the to-be-bombed last night Ministry of Education and Ministry of Justice buildings. Having heard the account of Dr. Haidar Eid who had a sleepless night when the Council buildings were first bombed, I wasn’t surprised when the bombings recurred on other buildings.

At 12:50 am, I’d been speaking with two doctors in their hospital office when a loud explosion hit what I now assume was either the Ministry of Justice or Education. They, Palestinians from Gaza who’ve endured many an invasion, dropped to the floor at the noise and impact. Haidar confirmed: “they hit the Ministry of Justice, as expected.”

Two hours later, at 3:05 another explosion rocks Sharon and I from tentative sleep. I’m thankful the windows are already shattered, because surely they would’ve blown in on this impact. Nonetheless, I’ve instinctively curled into a ball, covering face.

Haidar confirms this blast: “M o J again. One of my windows fell outside.”

Twelve minutes later, the next huge explosion. Ministry of Education, Haidar confirms (he has the radio on and translates for me). “My friend lives opposite it,” he adds. “His children are terrified. His house door is down.”

At 3:37 the drones intensify their volume and presence. At 3:52, another shuddering blast. At 3:43, two very loud, strongest yet, blasts knock the wind out of me as I lie in bed. Shockwaves shake and rattle me, the walls. Ministry of Ed again, Haidar clarifies. Now Legislative Council Building. There’s no point in moving, I couldn’t find a place to feel safe (in a hospital yet).

The angry buzz of drones is joined by helicopters. It’s nearly 4 am and they’re presumably surveying their work. I lie wondering what’s next. 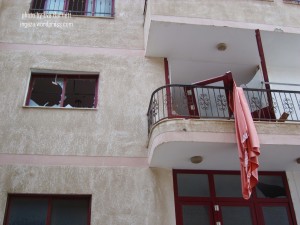 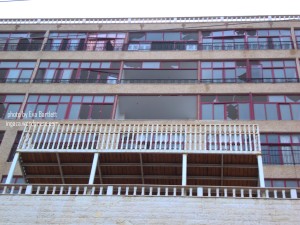 The next morning, I survey the damage done in previous nights: many of the hospital’s windows are blown, shutters down, some doors off, some walls cracked.

I walk from the hospital to a downtown news office, passing many other burnt out, bombed out, skeletal structures en route: the destroyed Ministry Council compound; a mansion, the Legislative Council, a building which seems simply to be a business or apartment.