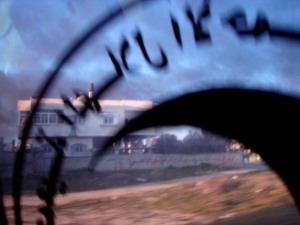 Back in Gaza city with a ride from the ambulance, after a night at the Jabaliya Palestinian Red Crescent Socitety (PRCS) station, in eastern Jabaliya, 1 km from the border, where we rode with the ambulances and endured a night of shelling, without armour, without safety, as did the population of northern Gaza.

From the news office in central Gaza, I cannot believe the sounds of bombing, though they are targeting the area from which I’ve just come, as they did throughout the night. From here it sounds like…like a massive sledgehammer smashing this land, smashing to pieces. The louder thuds rattle this building, as if being hit by a battering ram, though it is just the impact of the shockwaves from some kilometers away. Try to imagine how it is to actually be hundreds of metres from those blasts.

The hits are seconds apart, relentless. Somehow the drone’s buzz manages to be louder, its high pitch advertising that everything is still being surveyed, everything will still be bombed.

The 9th floor affords a view of tunnels of smoke everywhere, thick, dark, noxious, and concentrated especially in the Jabaliya region and further north and west, in Beit Lahia.

I smelt this smoke throughout the night, the sky illuminated with explosions and Israeli flares. At one point, in the lightless PRCS bathroom, I looked out the window. Here, without voices to distract, it was the night and I: the bombing hundreds of metres away, the senseless killing. I lost my faith in humanity again.

The medics, and the ordinary Palestinians who endure an on-going Nakba, occupation, invasions, imprisonment, and starvation rations are what brings me back to life, gives me hope, though their own situation is utterly hopeless.

Starting around 3 pm, with Israeli tanks amassed along Gaza’s border, the medics report that already then they couldn’t reach the injured in many places. Before the Ibrahim al-Makadma Mosque near Beit Lahia was hit, killing 16 and seriously wounding 50, 25 in critical condition, the warplanes struck a large, cement water tank atop the hillside overlooking the Dawwar Zimmo area of eastern Jabaliya.

What strikes me more now, more than the dismembered and burned corpses I saw two nights ago, more than the intensity of the missiles hitting all around us last night and the feeling that at any moment… was the panic on residents faces. Panic fleeing, panic trying to flag an ambulance for the wounded, the dead, panic even in the ambulance drivers and teams.They’ve seen a lot, many have done this work for a decade or more, but this is far, far worse than any have seen, or imagined, they tell me. In the morning light, as our ambulance tries to reach another wounded, I see new streams of women, children and men, carrying some few possessions.T 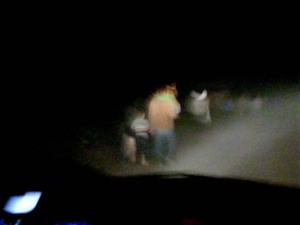 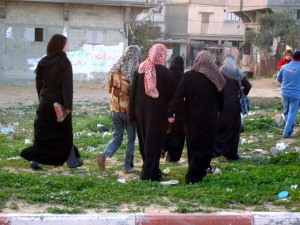 Heading to the hospital with an injured man, our ambulance meets another going in the opposite direction.“Walla, montica khateera!” our driver says, leaning out the window [“really, its really dangerous there”]

I work on different updates, I forget where I am and am rudely drawn back by renewed thuds. I hadn’t noticed their lapse.Was it 5 minutes? 10? 2? Whatever, they’re renewed, and are they louder than ever?

How any earth is left, let alone people, I do not know.

The urgency to report this slaughter, overcomes any need for sleep (two nights without) or warmth (windows blown out in the office I work in).

I think of the ambulance drivers and medics, with their fantastic personalities, humour, courage, and know that somewhere they are working amidst this.  I think also of the children i photographed in that area yesterday. 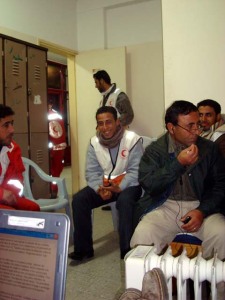 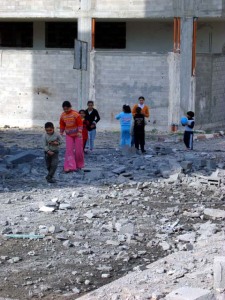 Last night, on one of the mad scrambles in the ambulance, we rushed, then inched, towards an injured person.  In the northwest, in an area Israeli tanks were shelling particularly hard, the ambulance was wary.  They’d already had missiles launched at them on a previous run in the area.  This is the region where so many phone calls were coming from, so many desperate people, trying to get out.

The driver turns up a dirt road, blares the horn, blares it more: a warning, ambulance coming, and a call, where are the bodies, the injured? Locals, including children around 10 years old, wave us on, give directions on how to avoid the army’s shelling.  As we crawl further up the track, the driver gets agitated, though he is competent and experienced.  Further on and no injured, no people, we turn back.

A man looking more panicked than I could imagine ran at the ambulance, waving at the hill to his left.  “They’re up there, three dead,” he tells the driver.  “There’re soldiers up there also.”  There is no way to retrieve the bodies, and the man has to return to his heavily-shelled neighbourhood.

Alberto points to a school 20 metres down the road.  “There’s a massive hole in the side of it; direct hit,” he says.  He’d been in an ambulance earlier which had retrieved two injured young men, family members,  who’d been delivered by cart and donkey.  “I tried to help.  The medics picked up one guy, and another medic started to pick up the second.  I tried to grasp his shoulders, to help.  My hand went inside him.”  The medics explained the man’s shoulder was torn open.  Alberto adds: “I could see his chest open, from the neck to his ribcage.  I could see his lung.  And two ribs.  His right arm had completley fallen off.” The dead was 25 years old.  The other, unknown age, “had an eye out” and severe head injuries.

As daybreak came, the smoke from the missiles continued to hang in a thick, thick haze.  The drones still loud, tanks still shooting, Apaches still chopping above.  And what seemed like the loudest F-16 bomb, I don’t know how it got louder than the previous blasts.

The dispatcher announces more casualties who cannot be reached, again in the northwestern area, beyond that blasted school, where a man with a gunshot in the leg, and another with an amputated leg, wait for some sort of aid.

Osama, an EMT, calls to see where I am. We worked together two nights ago. I’d thought I wouldn’t be there last night, was going to write instead. But the urgency prevailed and we went out. Osama asks where I am and I tell him, I’m writing, I have to tell people, they need to hear this, see this. If only you could hear this, smell this, feel the vibrations, taste the terror. 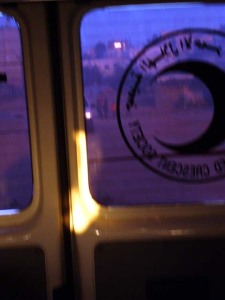 UPDATE: 25 new dead: bombing in northern Gaza kills 20, firing from tanks into a residential area, landing on houses and in the streets; another 5 dead after a stike on a central square in Gaza city, 2 tank shells onto a shopping area.