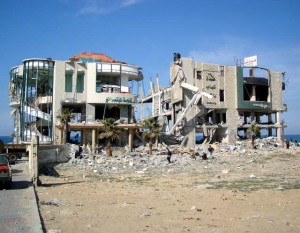 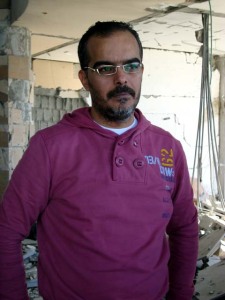 Wael Selmi life’s work had just been leveled by the invading Israeli army. The brothers’ furniture factory in northern Gaza was destroyed by the Israeli army 4 years ago, causing $300,000 in damage and losses. They’d had it just 2 years at the time. Along with that ruined factory, the family owns agricultural land which they cannot access near the Erez crossing.

At 4 am on January 13th, two Israeli F-16 warplane missiles destroyed the sea-side Jazeera hotel and the next door Shihab hotel, leaving the Jazeera, in particular, skeletal, with entrails of concrete and wiring dangling from ceiling to floor, and with other random survivors testifying what had been: matching, semi-intact chairs clustered in a corner, marbled stairs and tiled walls. One of the fourteen employees, while describing the building beneath the wreckage, detailed the losses: $28,000 for the 160 kilowatt generator, $25,000 for the electricity regulator, and the other losses amounting to $1.3 million in damage, with another $600,000 in unpaid debts.

Amer and Wael Selmi co-invested in the project two years ago, putting $2 million into construction and related costs. The Selmis aimed for the summer wedding season, and for conferences and conventions. The décor had been carefully selected in China: marble, matched tiling and furniture, finishings to render the hotel a choice place for a wedding. The siege which tightened a noose around Gaza meant it was impossible, for the time, to add a 4th floor and hotel rooms, for want of construction materials. And since the air attacks began on December 27th, the Jazeera hotel had been closed, with only a doorkeeper to act as night watchman.

It is a small consolation, at least, that the watchman was not killed in the massive bomb, instead receiving a broken arm, ribs, and hip.

“I don’t know why Israeli soldiers destroyed our hotel,” Wael said. “There’s no reason: we’re not political, not resistance, have no rockets. This was just a business.”

He spoke of the 20 members in he and his brother’s families: “Every day, we thank God that we’re okay. There’s nothing to say but ‘al hamdillulah’ and there’s no one to blame but Israel for this disaster.”

Perhaps as painful as the destruction itself was that the tangible realization of their careful work and dream, was in less than 10 seconds completely erased, along with their hopes.

Amer was more visibly upset by the unexpected destruction. Holding the weighty tip of the expired F-16 missile which took down his hotel, he asked rhetorically: “Where would we go? We’ll stay here, we’ll rebuild again. Whatever Israel does, we’ll stay on this land.” 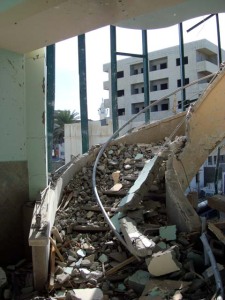 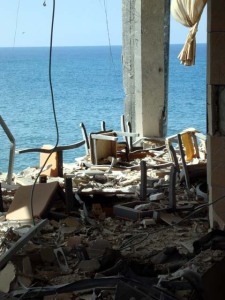 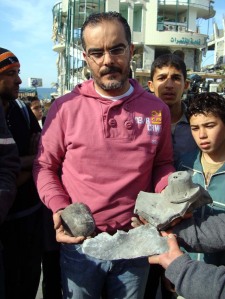 *holding remnants of the missile and shells which destroyed his dream

5 thoughts on “Their careful work and dream, was in less than 10 seconds completely erased”