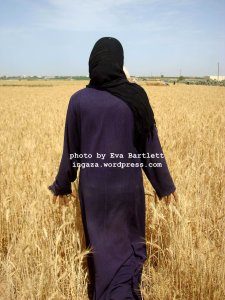 In the “buffer zone”, created and expanded by Israel  [the now 1 or 2 km band of land running along on Gaza’s side of the border, from south to north and northeast to northwest],  it is literally hit and miss whether farmers and civilians will be maimed or killed by the Israeli army on any given day.

On April 5th, farmers harvesting lentils in Khoza’a were, surprisingly, not shot at.  Two Israeli jeeps lingered an uncomfortably long time, honking and flashing their headlights at the farmers.  We were able to stand with the farmers as they swiftly swept the land clean of lentil stocks.

Although relieved no shots had been fired this time, the duration of the time harvesting was stressful, no matter how resilient the farmers are in their determination to keep working their land. In an ideal world, their greatest worries would be the weather or having the right equipment.

The next day, and again 3 days later, however, in al Faraheen a couple of km further north along the border area, farmers and internationals accompanying them were again subject to fire, dangerously close fire. 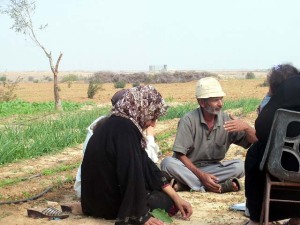 Today, Jaber Rjila and Leila abu Dagga returned to their house just under 500m from the border to repair something on the roof.  Following the extensive Israeli army invasion in their region in May 2008 which destroyed their chicken farm and much of their farming equipment, along with hundreds of olive and fruit trees, the couple and their 6 children had not been living in the house, instead renting one in town.  Jaber had periodically slept in the house until November 2008 when the Israeli soldiers’ shooting became too much.  He abandoned it for the time, returning only during daylight hours to tend what crops he was still able to grown.

Leila abu Dagga has long had a severe limp, making walking very difficult and tedious for her.  Yet she was active around the farm and house, doing what was necessary, at a slower pace but with great energy.

When they returned to their home today, Rjila and abu Dagga were all to aware of the Israeli soldiers’ policy of shooting at civilians in the “buffer zone”. But while wary, the couple is determined to keep their home and work their land, in spite of what is clearly a methodical Israeli policy from the top-down to empty-out Gaza’s border areas.  [see: Suddenly, Home Was Gone

“They told me our house was now in a closed military zone,” Manwa said. “They said it was a ‘decision from the top’ and that we had to leave immediately and walk towards Gaza. I refused, and tried to negotiate with them for time to gather our belongings. They refused.”]

They’d gone up to the roof to repair one of the many things damaged or destroyed by repeated Israeli shooting over the months when Israeli soldiers began to shoot. In trying to escape down the stairs, Leila fell,  breaking her leg.

On the phone hours later, after her rush to the hospital, Leila said she’d be okay.  “At least they didn’t kill me,” she said, with an alhamdilliah [ ‘thanks be to God’]. 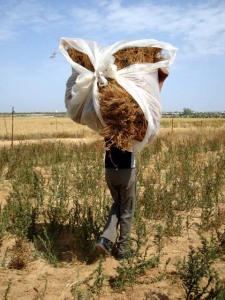 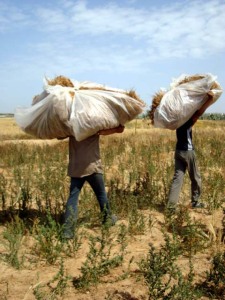 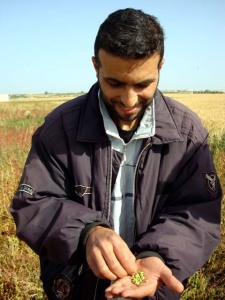 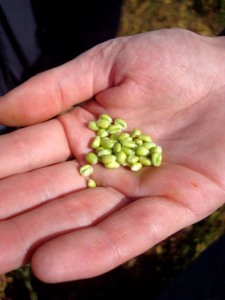 2 thoughts on “some days you get shot at”