“We have no potatoes, no tomatoes, nothing. Only onions,” said Maher Wishah, confessing that he was ashamed to admit this.

Wishah, his wife, and their 6 children live in a simple gray cement home in Bureij camp in central Gaza Strip. Although it was not leveled or torn apart in Israel’s war on Gaza, it did receive the more subtle but still troubling structural damage as so many homes: deep cracks cutting through weight-bearing walls, fallen and broken asbestos roof-tiling, and shattered windows.

“My neighbour can see through our wall,” Wishah said pointing at a crack which merged into a deep hole.  Neighbours gathered chunks of replacement asbestos to help Wishah re-re-roof his home, after his own crashed down during the bombings. But judging from the rivets in the ‘new’ asbestos, rain pours through, as it would through the glassless front window. 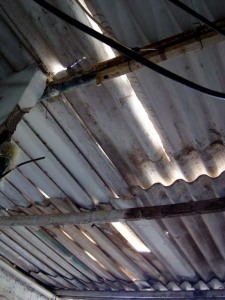 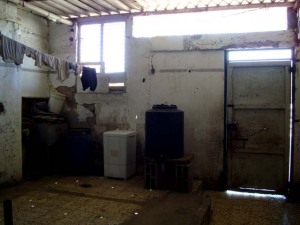 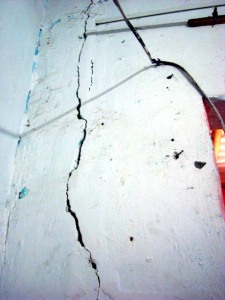 “This morning, al hamdulillah, we ate rice and beans,” he said. Refugees, the family does receive the UNRWA aid package every few months, consisting of three 2.5 kilos packets of flour, 8 L of cooking oil, 4 kilos of rice, 4 kilos of sugar and five 800g cartons of powdered milk.

These are the basics, which must tide his family of 8 over a quarter of a year, and to which he must add proteins and produce, all very expensive due to the siege and the after-effects of war.

In April, the UN’s Irin news reported that “according to OCHA, ‘The last shipment of livestock entered Gaza on 31 October 2008, and since the Hamas takeover in June 2007 livestock imports have been severely restricted.’”

Wishah used to work as a gardener for the former PA government, and still receives a paltry salary from the Palestinian Authority (PA). But 1000 shekels (roughly $240) per month, or $8/day, is not enough to pay the bills and buy food at inflated prices.

The family is by no means wasting that $8/day. Their house is as bare as they get, and it’s obvious that they haven’t splurged on paint, decorations, or even new mattresses for a very long time. 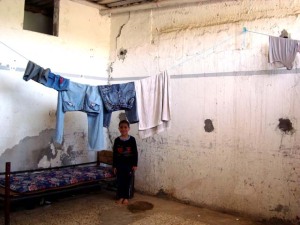 “Before the siege, I could at least manage to buy nutritious food for my family. Now, we’re lucky when we can get tomatoes and cucumbers.”

Of the produce available, tomatoes and cucumbers are among the cheaper, the more expensive luxuries being the more nutritious, like apples, bananas, oranges, nuts…

Further complicating the situation, Maher Wishah needs to take 12 pills/day as treatment for his faulty kidneys. About a year ago, he had a kidney transplant. Now, the after-effects and the medicine often leave him frail. “Sometimes my muscles become so weak, my limbs feel useless,” he said, complaining of fatigue and of not being able to work to supplement his PA income.

His children, ranging from 1.5 years old to 17, join Wishah in their crack-walled salon. Mohammed, a 4 year old, brims with mischievous enthusiasm, and relishes in jumping into photos and being the centre of attention.

Perhaps yet too young for the effects of malnourishment and stunting to show, I wonder how this currently bright child will fare after long-term malnutrition and possibly anaemia.

The same April Irin article cites UNICEF as reporting already in January that “10.3 percent of children under five are stunted (low height for age), a steadily increasing trend over recent years.”

The article continued, saying that according to the World Health Organization (WHO) “Stunting is usually attributed to a chronic lack of protein and micronutrients, including iron and essential vitamins.” The WHO reports an increase from 2008 in the number of chronically malnourished children in Gaza, “more than 10 percent”

It goes on to note that “Anaemia among children and pregnant women is high in Gaza, and that the WHO believes iron and vitamin A deficiencies have increased during and since the conflict. The WHO puts 65 percent of children aged 9-12 months, and 35 percent of pregnant women as anaemic.

As Irin reported, there is a positive correlation between malnutrition and low meat (animal proteins) intake, low consumption of fruit, family size and income.

So the implications of their poverty go beyond mere discomfort, but towards affecting the next generation, many of whom across Gaza will have stunted growth and, by accounts of nutritionists and experts, differing degrees stunted brain function, depending on the severity and longevity of their malnutrition.