Just after 7 am on May 30th, Palestinian farmers in Khoza’a, east of Khan Younis, returned to the land they’d been menaced off of 5 days earlier. “The same day the Israelis dropped papers saying they would shoot at us for being on our land they did shoot at us,” Ahmed, a 22 year old farmer explained.  It was around 10:30, he said. “They were shooting so much that the dirt rose in clouds of dust.”

When we arrive on May 30th, the bales of wheat are ready, all neatly and compactly hand-bundled, covering 30 dunums (1 dunum=1000 square metres) of land belonging to Radi Abu Rayder.  He has another 140 dunums which he can no longer access because it lies too close to the border, within the Israel-imposed “buffer zone”.

The farmers will take 2 days to clear the bundles from the field. 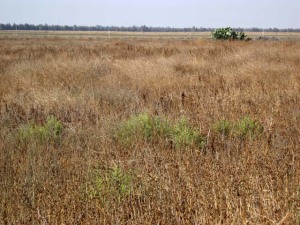 They work steadily, carrying bales of wheat to the waiting tractor trailer. It is piled as high and full as manageable, then trundles off to a storage field hundreds of metres away, further from the Green Line and the potential danger from Israeli soldiers. 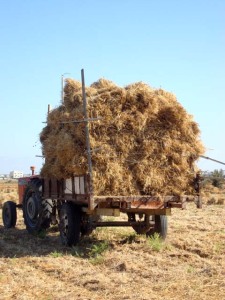 While most of the 30 dunums has been harvested, a small section remains. As some of the farmers off-load the trailer, the others resume hand-picking the wheat, ripping in bunches and laying for bundling. 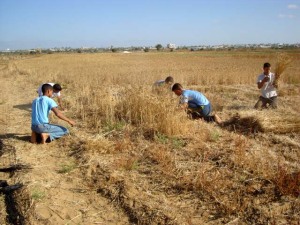 As they work, they tell us of how the land used to be. “This area used to be so filled with trees you couldn’t see the fence,” Ahmed recalled, gesturing at the naked fields around us. He spoke of how they adapted to the razing of trees and grew, instead, many types of vegetables. “We grew tomatoes, peppers, eggplants, and beans, among other things. We used to fill 17-20 trucks (4 tons each) of produce each day,” he said.

Amazingly, as he recounts their losses, he speaks without audibe bitterness or anger.  This is something I’ve come across countless times, whether speaking of razed farmland or a bombed house. The tone, when emotion is evident, is fatigue and confusion: why do they attack us? how are we supposed to live?  how can I feed my children?

But Ahmed recounts with a soft smile, just telling how it used to be.

Some time later, we notice thick smoke rising from the direction of the tractor.  Moving to see what’s happened, we arrive to find blackened, burnt wheat spread along the dirt track, laid there as the panicked farmers put out the fire.  Upon inspection, they see that the tractor crossed under a low-hanging electrical wire which immediately set the dry wheat alight.  It’s not hard to imagine how the wheat and barley in Johr ad Dik blazed just weeks ago, after Israeli soldiers shot incendiary bombs into farmers’ fields.

Fathi takes it in stride, accustomed to the struggles of farming in Palestine, though the main obstacles are the siege and the Israeli soldiers’ attacks.

*one of the young farm workers

*the tractor driver and his son.

After two days, the group has successfully brought all of the bales to safety. We are pleased their harvest hasn’t been lost, but not disillusioned to think that this is a victory.  Their situation remains the same: each time they go onto their land near the Green Line border fence they face the danger of being targeted by Israeli soldiers from jeeps or from their watchtowers.

A heavy price to pay for working on your land.

Six days earlier, on May 24th, we joined 7 farmers, including women and 1 youth, in a different area of Khoza’a, on land of Nasser abu Rjla a few hundred metres from the border fence. They, too, were harvesting the wheat they had already bundled, though they were forced to bring it in without the luxury of a tractor.

At around 7:45 am the shooting began, coming from one of the mechanical watchtowers this time.  These towers are a recent addition to the military landscape: remotely-operated by soldiers, the towers guns can shoot as dangerously close as the guns of Israeli soldiers at the jeeps.

Fifteen year old Mohammed led one of the donkeys hired to haul out the wheat.  The tractor driver who’d originally come to take the wheat sprinted off after the heavy shooting, preferring to save himself and his tractor rather than make some shekels.

But others, like Mohammed, are desperate for the work and will take the risk. ‘Take the risk’… how absurd… in any other situation, steering a donkey onto farmland wouldn’t be considered ‘risky’. 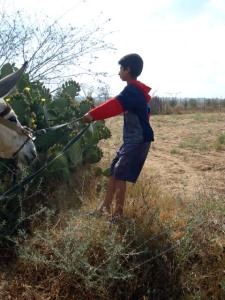 Two young boys (not working with our farmers) led donkeys onto the farmland, also needing to take the risk in order to survive. 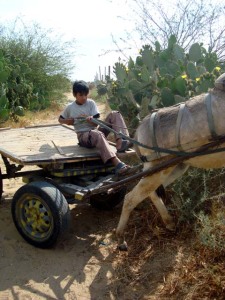 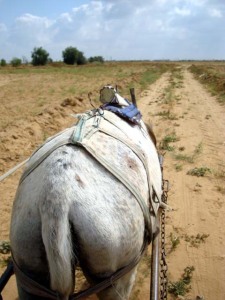 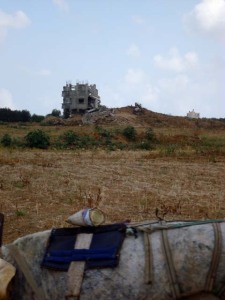 *Slightly south of the rough track, a house skeleton from the bombardment of Gaza.

The track, aside from being dirt with desert scrub, is  mangled by the Israeli tanks and bulldozers which occupied the region during Israel’s war on Gaza.  The rickety donkey carts met their match with this terrain, slowing to a crawl to pass over the swells and deep ruts, still repeatedly spilled their loads, causing the wary farmers to stop to re-load. Between the challenges of the track and the tiny cart-space, what would have taken two tractor loads and little time took 8 loads and a good 5 hours, back and forth under the blazing sun, always wary that the shooting could renew at any moment. 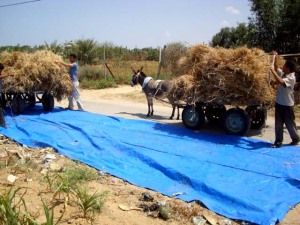 Each load was brought to a safer area on the road, and unloaded onto tarps, the carts going out into the fray anew.  Eventually, the harvest was brought in, thankfully without further incident.

The amount of time, worry, and effort still staggers, though by now we’ve seen so many incidents of intense shooting from the Israeli prison-keepers that it has become normal. Palestinian farmers farm to survive, and just barely survive to farm.