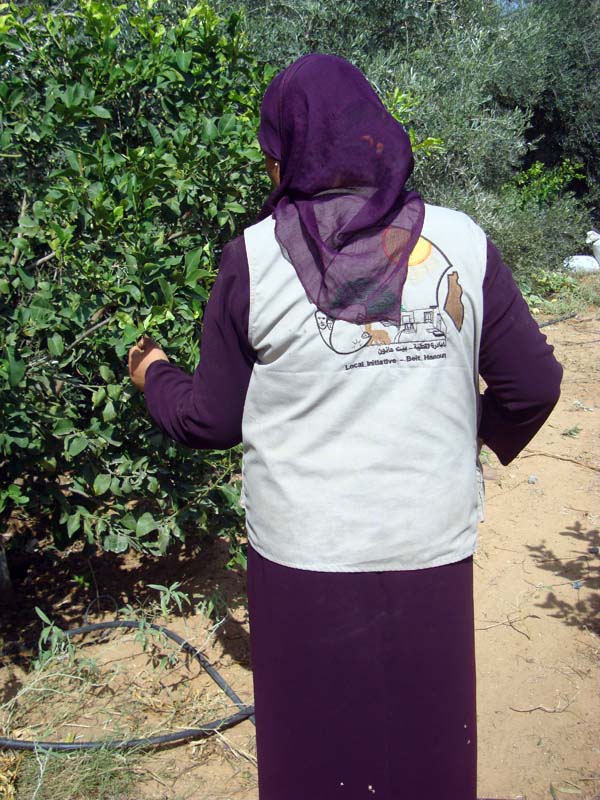 “My grandmother taught me the folk songs. They were popular all over Palestine many decades ago.”

Saber Zaneen, 44, and Khalil Nassir, 45, alternately belt out traditional harvest songs as they, too, strip the limbs of the green and black fruit in the northern Gaza region.

Keeping Palestinian culture alive is one of the mandates of Local Initiative, a Beit Hanoun-based volunteer group comprising many youths and women, and of which Fida Zaneen is a member. At group events, participants often sport traditional robes and Palestinian kuffiyehs, and dance dabke to hand-drums and singing from the group.

Formed in September 2007, Local Initiative has a number of other mandates: promoting volunteerism; reaching out to marginalised families living in the regions along the Green Line border between Israel and Gaza; giving psycho- social support to children scarred by Israeli military attacks and shooting; financially assisting children with martyred parents; and improving the role of women and youth in society.

Saber Zaneen, one of the original seven founders and now the general coordinator, elaborates on the group’s objectives.

“The border areas are very dangerous and difficult areas for families and farmers to live and work in, due to Israeli shooting and shelling at any Palestinians in the area. We are trying to support those people who choose to remain on their land.”

Farmers in the north and eastern Beit Hanoun buffer zone region have reason to feel threatened: of the eight Palestinians killed and over 33 injured in the buffer zone since the Jan. 18 ceasefire, three of the killed (all children) and 12 of the injured (including six children) were attacked in the northern and eastern border regions.

The region, dubbed the “buffer zone”, is an Israeli-imposed no-go zone which encompasses approximately 30 percent of Gaza’s most fertile agricultural land, ranging from off-limits land between 300 metres wide to up to two kilometres wide in some areas. According to Israeli authorities, anyone entering that area is subject to being shot by the Israeli army.

IRIN, the UN’s news agency, reported that “In different areas there is a certain ambiguity regarding the exact border between Israel and the Strip.” The report cited an Israeli military source, who added that the fence that delineated the Gaza Strip today did not necessarily reflect the final border that would be determined by the two sides in a final status agreement.

Ahmed Sourani from the Palestinian Agricultural Relief Committee summarized to the Guardian news the very real fears of farmers with land in and near the buffer zone: “Now there are areas, depending on the situation, where farmers cannot reach their farms in safety within an area of over a kilometre. It is indirect confiscation by fear.”

It is in the knowledge that farmers struggle not only to access their land but also to bring water to it, that Local Initiative volunteers accompany farmers to do the simplest of things: water their land, check on their bees, re-plant Israeli-bulldozed trees.

“During the war, Israeli soldiers destroyed almost all of the water wells and pumps in this area,” says Zaneen of the razed land east of Beit Hanoun. “We sometimes accompany farmers to bring water to their land. We’d like to see the wells and pumps repaired and farmers working their land without fear of being shot.”

The Guardian report corroborates Zaneen, saying that international officials believed that throughout Gaza “perhaps hundreds of wells and water sources have been damaged and several hundred greenhouses have been levelled.”

Local Initiative uses direct action against what they see as Israel’s policies of collective punishment of Gaza’s Palestinians. To highlight the issues and increase solidarity among buffer zone inhabitants, the group leads non- violent demonstrations and holds events in the buffer zone region.

Some of the demonstrations have been near the Erez checkpoint, along with other NGOs and local groups, calling for an end to the siege of Gaza, imposed since shortly after Hamas was elected in early 2006, but tightening more and more severely since June 2007 when Hamas took control of Gaza.

Another demonstration saw Local Initiative volunteers march to land near the north-eastern border, protesting the Israeli shootings and the Israeli destruction of water sources in the region. Farmers passed by, donkey carts laden with emptied containers of water used to irrigate their land, pointing out destroyed water wells and pumps and noting that in the eastern Beit Hanoun region just one well remains to irrigate 40 dunams of land [1 dunam= 1000 square metres].

Zaneen speaks of the impetus to set up the group. “It was after the Israeli army had on two different days shelled groups of children in Beit Hanoun in 2007. I saw tiny body parts all over the ground. It was the hardest thing I’d seen.”

The first incident Zaneen refers to occurred on Aug. 21 2007 when Abdul Khader Ashoor, 13, and Fadi Kafarna, 11, were targeted by an Israeli missile. Testimony given by a child injured in the shelling to the Palestinian Centre for Human Rights (PCHR) notes that the boys were going to pick fruit in an area where a homemade rocket launcher stand stood when they were struck by the missile.

Eight days later, three children from the Abu Ghazala family were likewise killed by an Israeli ground to ground missile. PCHR reports that Mahmoud, 8, Sara, 9, and Yehya, 12, were herding sheep roughly two kilometres from the border fence when hit by the missile and that, while 40m from a homemade rocket launching stand, there were no resistance activists in the area at the time.

In September 2007, after recruiting concerned Beit Hanoun residents, the seven volunteers met for the first time as Local Initiative. Since then, the group has blossomed, now comprising roughly 20 female volunteers and 30 males. The ages range from teenage to parents.

Fida Zaneen studies engineering at university. She is fluent in English and often acts as translator for visiting international delegations and journalists, at the same time joining in the non-violent demonstrations.

Ibrahim Kaloub, 17, one of the younger volunteers, documents their activities. A compilation video shows psycho-social activities with clowns visiting the border region families, demonstrations in the “buffer zone”, celebrating Palestinian Land Day, harvesting olives in 2008, and Israeli tanks and military bulldozer incursions along the border regions.

During the first ten days of October, Local Initiative volunteers assisted in the olive harvest on five border area farms. Mohammed Zaneen lives to the east of Beit Hanoun. Over the years of numerous Israeli invasions, the family has lost their ten dunams (one dunam is 1,000 square metres) of olive trees to Israeli bulldozers, leaving just 18 trees as their source of olives and oil.

Zaneen says that in eight days of harvest work, they harvested over 100 trees in border areas north and east of Beit Hanoun, but that the harvest was a meagre one. He cites natural biennial decreases in olive production as one reason for this year’s poor harvest, but says the most significant factor was the Israeli bulldozing of hundreds of olive trees in the border areas – an estimated 90 percent of the trees – during the Israeli massacre of Gaza last winter.

With the choking siege on Gaza, unemployment couples with soaring prices to render simple existence a daily challenge for the 90 percent of Gaza’s population who live in extreme poverty.

Zaneen knows the region and is acutely aware of the most impoverished families, including children orphaned by one or both parents. In dire cases, he seeks financial aid from local and international supporters.

Khalil Nassir, 45, is another of the original founders. During the Israeli winter massacre of Gaza, Nassir volunteered as a medic in the region.

Mahmoud Billih, 17, is always in the front line of any demonstration. He, too, has been a Local Initiative member since the beginning.

He recalls the day Local Initiative and international activists brought a martyr’s corpse from the buffer zone east of Beit Hanoun. “This was a very important act. His family had no idea if he was alive of not. When his father was able to lay his son to rest, he too could rest.”

Gassem Kafarni, 23, an engineer, and another of the original members remembers: “Saber (Zaneen) said, ‘we need volunteers who are willing to risk their lives while helping families live on their land.’ I was willing.”

Kafarni speaks of the families Local Initiative used to visit, before their homes were destroyed during the last Israeli massacre.

“We used to visit around 13 families who lived in very hard conditions. They all lived close to the border fence and had many problems from the Israeli soldiers. No other groups visited them; they were given the UN dry food aid but otherwise were completely ignored. We’d go, bring the children toys, and play games with them. They were always very happy for our visits. But now their houses are gone.”

Shabaan Garmut, 60, is among the families who had a home next to the border fence. “There was always Israeli soldier shooting,” says Kafarni. “Eventually Garmut told his family to go live elsewhere, for their safety. But he stayed in the house.”

Kafarni says that the Israeli soldiers would prevent Garmut from reaching his water well, thereby preventing him from watering his three dunams of olive and lemon trees.

“We organised solidarity marches to his land, brought many journalists filming live so that the Israeli soldiers would not shoot too closely. We also brought new trees and planted them to replace trees the Israelis had bulldozed.”

With the Israeli massacre of Gaza, Garmut’s house was destroyed and his land razed.

Saber Zaneen says that approximately 80 houses were demolished in the buffer zone area to the north and east of Beit Hannoun – rendering at least 400 residents homeless.

Following the attacks, the Initiative organised short-term emergency medical training courses for farmers and civilians in the border regions, to better enable them to work and live on the land, but prepared for Israeli attacks.

The volunteers also engage in activities for traumatised children. In June 2009, Local Initiative held a ‘let me play freely’ day of kite-flying in the border region, involving also children with special needs and physically challenged children. Amal Nassir, 21, is a social worker and one of the original seven founders. “I’m not afraid to go in the border areas,” she says, despite the reality of Israeli soldiers’ shooting. “The hardest thing for me is to hear the children speak of their experiences and suffering during the last war.”

For Fida Zaneen and Nassir, being female does not limit their participation. “We are equal; we can do any of the work the men are doing, nothing is off- limits,” says Nassir. 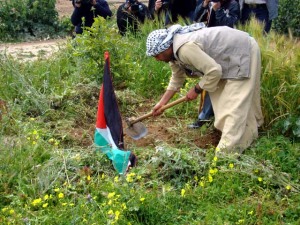 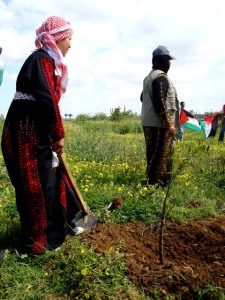 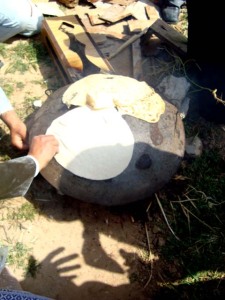 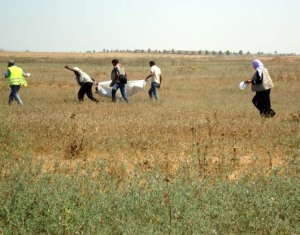 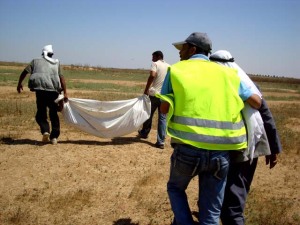 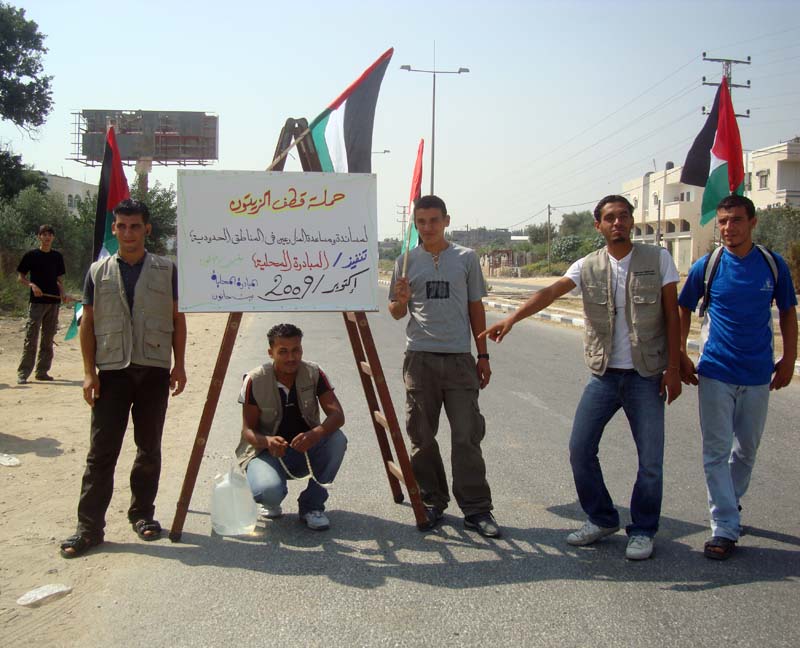 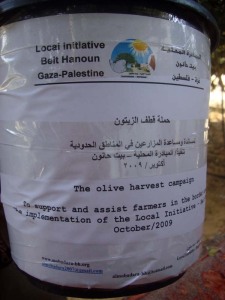 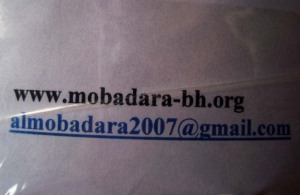 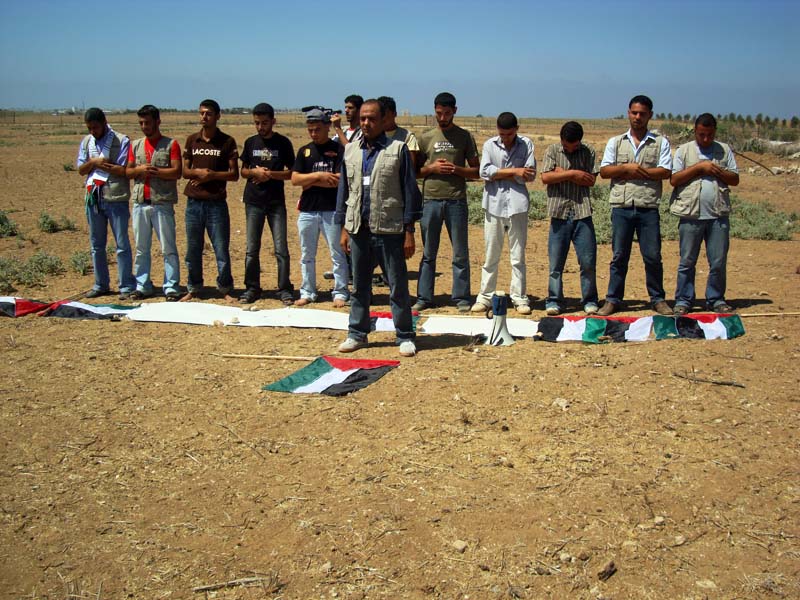