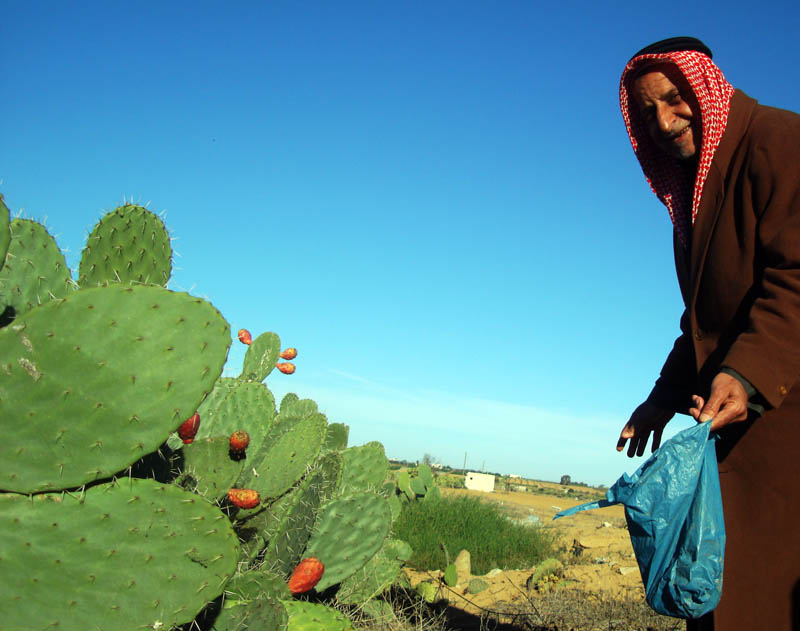 “I haven’t been on my land since we harvested the wheat last August. It’s too dangerous. There was an Israeli operation here yesterday…6 tanks and 4 bulldozers. I could see them from my rooftop in the village, but didn’t know if they’d destroyed my land.”

Abdul Nasser Abu Taima has 15 dunams of agricultural land roughly 400 m from the Green Line border dividing Gaza and Israel. Until a few years ago, he had a home on and lived off the land. Israeli bulldozers destroyed his house and razed his land.

“That was our home,” he says, picking up a piece of piping with a chunk of foundation still attached, chucking it onto the pile.

“I get so upset when I come to my land and see how beautiful it is, remember how well we lived off of it…and realize that now my children and I can’t live here.”

Although Abu Taima’s land is technically outside of the Zionist-imposed “buffer zone” – an area of 300m running along the Green Line border from south to north –he and the other farmers in the region are still subject to danger by their mere presence near the “buffer zone”.  “Israeli” authorities reserve the right to shoot at anyone within 300 metres of the fence, but in practice shoot far beyond 300 m, up to as much as nearly 2 km.

“Whenever we work on our land, we know the Israelis can shoot at us. They say it’s for security, because there is danger. But where’s the danger? What’s the problem? They know who we are, they can see us.”

His regret is amplified by the bitter observation that on the other side of the Green Line, “Israeli” tractors work the land, crops grow, and water exists in comparative abundance. Lines of un-razed trees provide a stark contrast to the now olive, nut and fruit tree-devoid land on the Palestinian side.

“We will still plant on our land. But we’ve got to wait for the heavy rains. All the water sources –the wells, the cisterns—were destroyed by Israeli bulldozers or shelling. Now we can only wait for rain.”

This year the rain is late in coming. Aside from a scant few days of showers, it has been dry, and the land remains parched and un-worked.

“We usually plant in November, or at least December. January is the latest we can plant our wheat. After that, there’s no point.”

The only thing growing now are the hardy cactus plants –saber, in Arabic. Abu Taima cuts a number of the prickly, bright pink-orange fruits and puts them in a bag. He stoops down and rips our handfuls of tall grass. 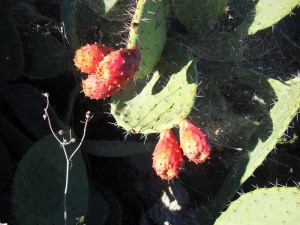 We walk, and he turns repeatedly to survey his land. “Mish hada haram? Mish haram?” he asks? Isn’t it shameful, outrageous, that he can’t work his land, that the land lies unused in a Strip that is in want of cheap, fresh wheat, for a family that is in want of a source of income and nutrition?

He stops, dumps the cactus fruits on the ground and, rolling them with the tall grass, begins cleaning them of their prickly needles. 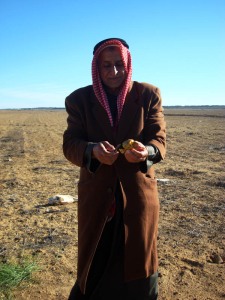 The fruit is refreshing, mildly sweet.

“We used to give tea to the Israeli soldiers. Sure, there were always problems with the occupation… but still, we could live here on the land, farm here, without this kind of danger.”

Walking up the dirt lane, we pass a farmer tending his pea and bean crops. “He’s connected to a line from Khan Younis. That’s why he can farm his land,” Abu Taima explains.

The farmer sees us and greets us with a smile. “Wait a few minutes, I’ll bring you some peas.”

As he harvests, Abu Taima explains, “even here, this is maybe 600 metres from the fence. But even here they are shot at… from Zionist jeeps, from the guard towers, from the remote-controlled towers.” 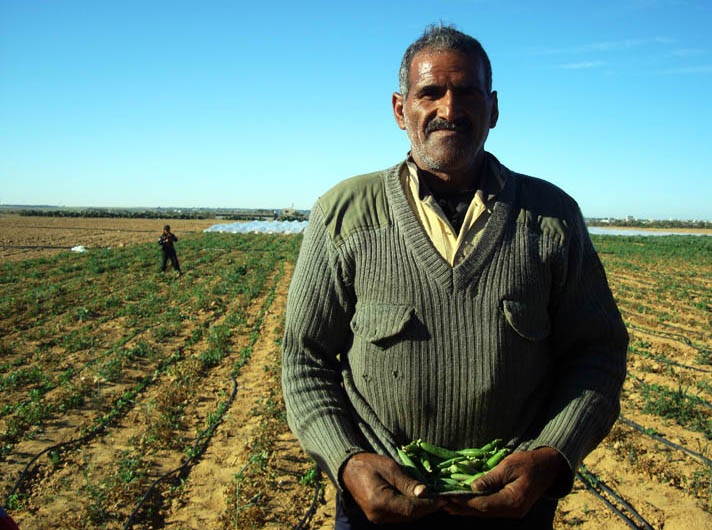 “My children help me on the land. You know, the Israelis even shoot when they are with me. The Israelis see the children, but they still shoot.”

He also remembers a better relationship with the occupying soldiers.

“They’d come to my land and I’d give them watermelons, vegetables. Now there’s no interaction. They just shoot at us from far away.”

The nearest remote-controlled tower is open. The machine gun within is capped by a dome which ironically opens to a lotus-shape when the gun is ready to fire.

“I’ve got 18 people in my family. This actually isn’t our land. Our own land is right next to the fence, so we can’t go there any more. Now I rent land, pay $2500 a year to use it. During the Israeli war last year the Israelis destroyed my piping, my hothouses, so I had to replace that too.”

We leave, amble along on Abu Taima’s tractor past destroyed homes, cisterns, and largely-vacant land.

Abu Taima has saber: patience. He will return when the rains come.