Nidal crouches by the front door, looks up and smiles with bright eyes as we walk past. Bright eyes, a large grin, and that is all.

Nothing strikes me as unusual in the ten year old when he doesn’t leap up to greet us as most kids do. Maybe he is pre-occupied with his thoughts, an unseen toy. Maybe he is tired.

Only when we come back out of the bombed-out house 30 minutes later do I notice he is still crouched in the same hunched position, still quiet.

He sees us and again flashes a bright grin. Irresistible.

“He doesn’t speak,” says his grandfather, Saleh Abu Leila. “And he can’t walk normally. In fact, his mind is gone,” he says, summarizing Nidal’s state post-war on Gaza. 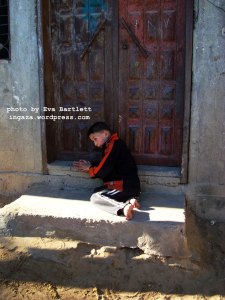 Abu Nidal comes over. “I’ve got 5 kids. Thank God only Nidal has been affected.”

He refers to the heaviest days of Israeli shelling and bombardment in their region: Attatra, northwestern Gaza, one of the hardest-hit regions in the Strip.

Many of the greatest tragedies which unfolded during the 23 day Israeli massacre of Gaza did so in Attatra, where ambulances were prevented from reaching the wound, targeted by Israeli shooting and shelling (and medics consequently were killed and injured), and where white phosphorous rained down, burning children, women, men, elderly, killing, choking.

Abu Nidal’s house was among the ravaged. The top floor, where the Abu Leila family lived, has been gutted by phosphorous fire and destabilized by shelling. Israeli soldiers’ sniper holes mar almost every available wall, and the ceiling leaks water, furthering rendering the home uninhabitable. Since the Israeli war on Gaza, the Abu Saleh’s have lived in tents, now in their second winter of living on the sand.

*admist the destruction of his entire home, the loss of their china plates anguishes Saleh Abu Leila.

“When the Israelis shelled our house, there was also heavy tank shooting in the area. There were Israeli tanks all around. So much noise, so much danger. Nidal couldn’t take it.”

Prior to the war on Gaza, Nidal was a normal young boy, running, as mischievous as the next. That much is evident in his smile.

He now walks with a wobbled gait, sits with a droop, and only seems to concentrate when his father encourages him to do so.

“We took him to doctors in Gaza, but they say he cannot be treated here. He needs to get help outside,” Abu Nidal said. “Can you please help, somehow?”

How many parents are asking that question? Yasmin’s mother is. After seeing her sister Hanin shot dead, Yasmin’s mind broke. She receives some therapy from visiting doctors now and then, but is otherwise tragically altered.

The most recent study, “Trauma, grief and PTSD in Palestinian children victims for war on Gaza” by the Gaza Community Mental Health Programme, revealed that in the aftermath of the winter assault on Gaza, an unbelievable 91.4 percent of children in Gaza displayed symptoms of moderate to very severe PTSD. Meanwhile, only about one percent of the children showed no signs of PTSD.

“I was a farmer, farmed strawberries,” Abu Nidal said. “But now I’ve got no work.”

Strawberry exports have halted since the Israeli siege on Gaza heightened in June 2007. Though the fruit is succulent and hearty in Gaza, with no outside market it is sold for a pittance, not worth the investment of farming them.

The house –one of 20,000 completely or partially damaged during the massacre—is next to one of 36 United Nations schools damaged, this one torn in half by the Israeli missile which broke through its top floor.

Aisha Ghronaim, an elderly neighbour, crawls over and explains that her legs are virtually useless. She is old and age has taken its toll on her. But her poor legs were the reason she almost perished in the Israeli attacks, when her one-room home was shelled. “There were nine of us in that room. I had to crawl out. When Israeli soldiers saw us, they took me and one of my grandsons –he’s 11 years old.”

Ghronaim says that Israeli soldiers held them for three days, along with many others from the region, scolding them for not having left their houses after Israeli warplanes dropped leaflets warning residents to leave.

“Where would I go?” is the sentiment most expressed.

“They wouldn’t give us food or water for those three days,” Ghronaim recalls.

This is an account echoed around the Gaza Strip, the same detentions and denial of food, medical care, and basic needs widespread during the Israeli invasion, despite Israel’s obligations under international law.

We leave the area, Nidal looking up to smile his blissfully unaware smile, Abu and Umm Nidal pleading with their eyes and mouths for some sort of help.

*”From the outside, it almost looks like a normal, liveable house.  But inside it’s completely destroyed.” -Saleh Abu Leila