“The colors of sunset are wonderful but the sun is the most wonderful.

When the black clouds with their golden warm colors play on the sound of a bird that dialogues with the leaves of trees that were eaten by the wind and dance with a beautiful golden dress coloured by the sunset appearing in the far horizon behind the clouds I try to touch the sun before it closes its eyes to mix my brush with its colour and my white painting is the mirror.”

‘Random’ is a word a friend uses to describe Gaza. For all the truths we know and see in Gaza, after years of full-closure siege, after the 23 day Israeli massacre of Gaza and the Israeli invasions and military aggressions before and after the massacre…there are certain norms one expects to see, and does: destroyed homes, businesses, factories, cars; devastated families with one or many martyrs; a siege and massacre massacred economy; and a permanent cloud of pain, frustration and expectation in the air of Gaza.

But those outside of this Strip –this tiny piece of land and its truly imprisoned population, of which Israel’s actions seem destined to try to break the spirit and will –might not see the surprising and everyday acts of beauty, resilience, art, life, humour and free will, against all odds.

On Monday, March 15, a group of artists opened their exhibition “Gaza’rt”, saying it comes “at a time when we suffer from political and security deterioration and fading of future horizons,” writes Mohamed al Hawajri, one of the founding artists.

The artists, Eltiqa group, was founded 2002, their goal “art for art’s sake”. Their main headquarters is on Omar Mukthar street, just west of the bombed Abbas police station, but this gallery took place in Gaza’s bombed Red Crescent cultural building in the Tel el Howa al Quds hospital complex (needless to say, also bombed). The Red Crescent cultural centre housed a theatre, walls adorned by paintings of local aspiring and well-known artists, and was dressed in the soothing textures of wood.  Despite the destruction wreaked by repeated Israeli shelling, including with phosphorous, the Red Crescent continues to use the intact rooms and buildings, sometimes housing a musical event, sometimes airing films, sometimes the stage for works of art.

Over 20 artists participated in “Gaza’rt” many of them women, many of them yet aspiring and experimenting, but all with strong, emotive imagery.

“The accumulation of demolished houses look like an exhausted body, rising noise, lost shouts full of pains, conflicting winds with the rain, blurred eyes strongly concentrating without thinking about anything, losing time and confused. This is Gaza, the coastal city at the time of civilization and urbanization.”

The plant found throughout Palestine, its name in Arabic ‘Sabre’ meaning both cactus and patience. Mohamed Abusal relates the cactus, with its “fruits and thorns”, to humans, and “sometimes to musical instruments”.

He sees the cactus as an extension of Palestinians, resilient, the Palestinian mother having and bringing up children “despite all the difficult circumstances”.

It is “patience, like the existence of a Palestinian village devastated by the occupation.”

Abusal compares the transfer of cacti to containers for keeping like that of “Palestinians expelled from their land, attempting to make alternative life in refugee camp…”

“The nightmare recurs again, but you will not pass” –Moahmed Al-Dabous

“He extends his body while standing and faces it in defiance and confidence, shouting in the tyrant faces trying to step in fear. But he meets bare chests. Suddenly it appears that nothing has happened as if it was a game…He faces aggression, death, poverty, and grudge. But the bitter lesson of life is embodied and repeats the question.

Here he tries to stick to the ground while his feet are stuck in the mud and his eyes are watching the development of oppression and fear in the eyes and watching my family. What a disaster that bumps the wall.”

“My artistic works are inspired by the daily and natural life which surrounds me. Nature, with all its elements, is the most important part in the decorative design which appears prominently in my paintings.

“We are often invaded by the darkness of life which overshadows our meadows and our pillars. But the moment of hope does not part with us. It was created with its contrast and introduced to disperse the darkness to begin a new trip with life and to draw a new smile on our lips.

We are the contradiction and we are the illness and the medicine.” 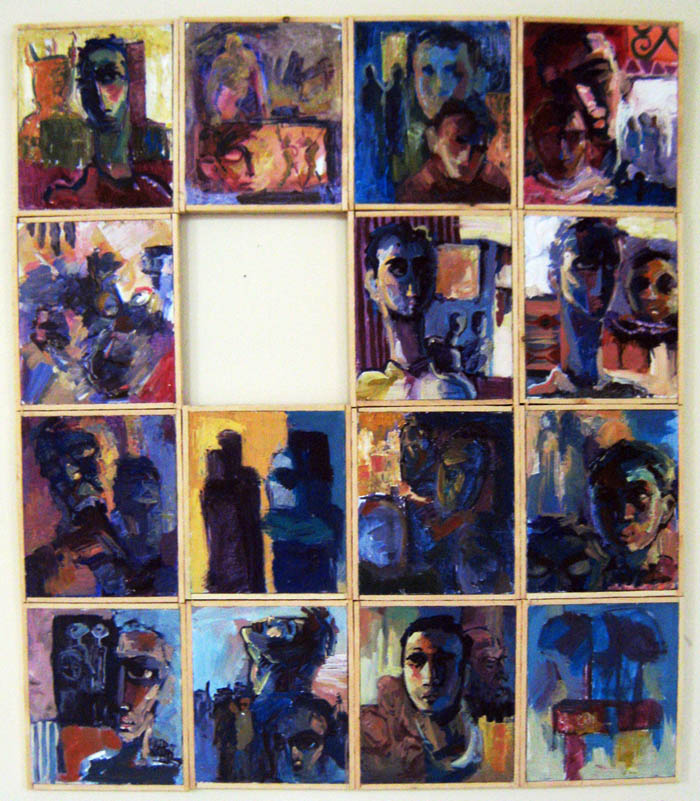 “My childhood is still the pivot which I turn around in my paintings and works.

Part of my childhood is my mother’s tales, with her terrifying dramatic voice sometimes, and the soft voice at other times. With my eyes staring at the unknown to imagine the hero of the tale who sometimes appears like a monster, evil and fairy.”

Through this artistic workshop, I decided to search inside the features, but with a special fision which is the language of dialogue.

The field of my research is the faces of the people in an expressive style. They include innocence, sadness and sometimes escape…a child not knowing what is going on around him… in a moment between survival and departure.” 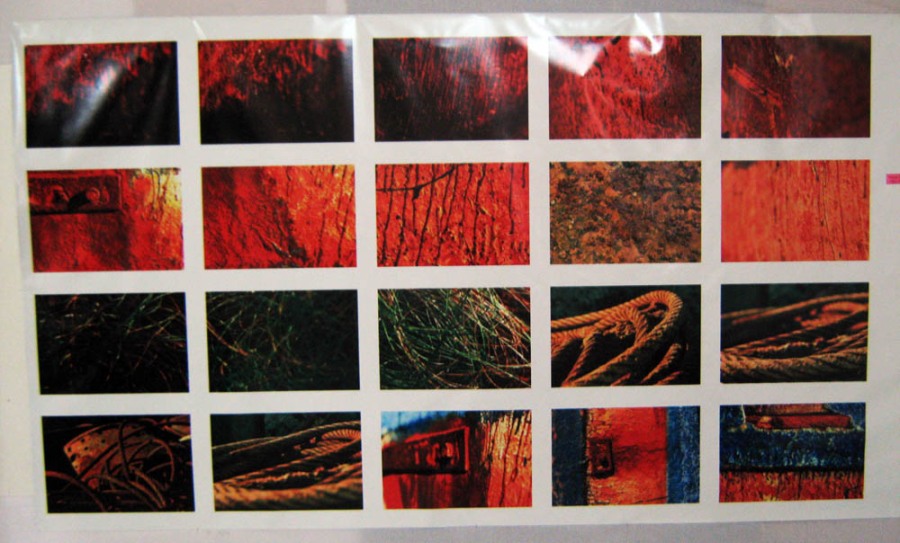 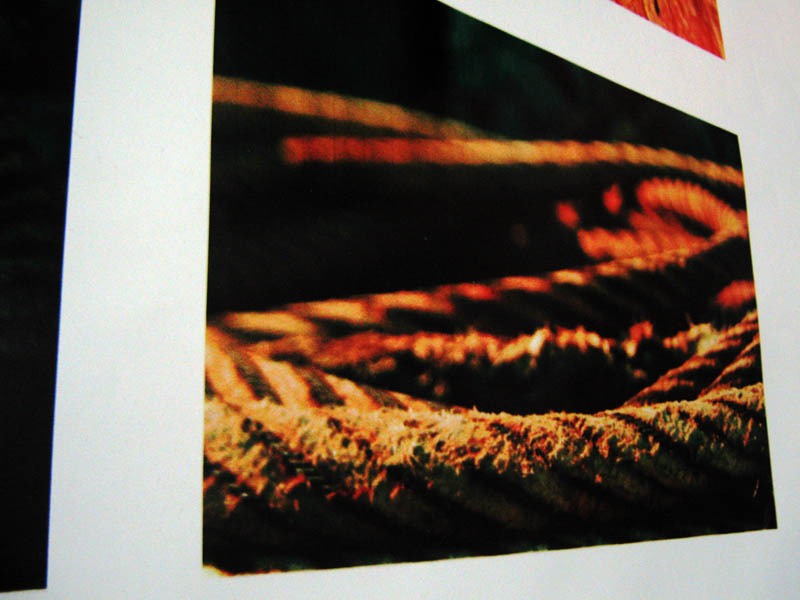 The colours of rust, of time, of life in Gaza, throughout Gaza.

Sixty two years of expulsion, dispossession, starting over again and again, facing occupation and Zionist attacks, from ’48 till now, has anything changed?