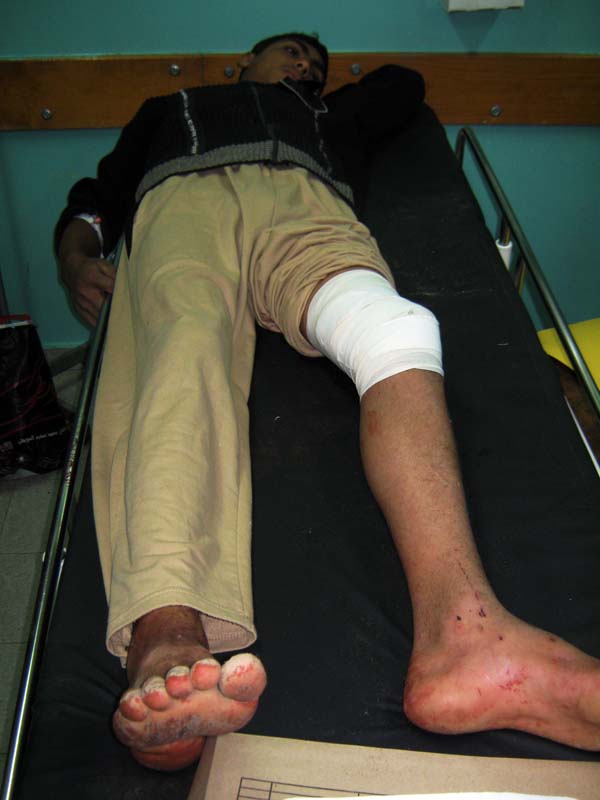 Said Abdel Aziz Hamdan, 15, went for his first time to Gaza’s northern border area to try gathering scrap metal for re-sale. Although an area lined with Israeli military towers and notorious for Israeli soldier shooting, shelling and abductions of Palestinian workers and farmers, Hamdan did not feel he would be in danger.

“People go there everyday to gather bits of metal and concrete. The Israelis see us and know we are just working, it’s normal,” he said from his hospital bed in Jabaliya’s Kamal Adwan hospital.

Hamdan set out from home shortly after 10 am Friday, going with his younger brother Suleiman, 13, to earn whatever shekels they could. From a family of 7 brothers and 5 sisters and whose father is unemployed, Said Hamdan had no other options for employment.

“My friends go every Friday, so I decided to join them today, to try this work.”

The bullet which struck Said shortly before 2pm as he was leaving the area came from the direction of a nearby Israeli military tower. It pierced his upper left thigh, entering from outer thigh and exiting from inner thigh, leaving a 2 cm exit wound, his doctor said. 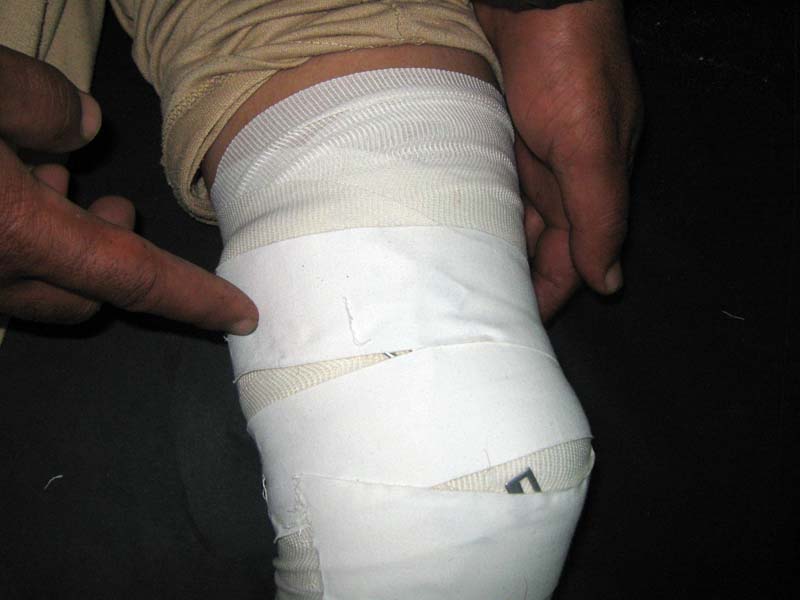 “There were many people there, working like me,” he said of the area, a former Israeli settlement known as ‘Dugit’.

Still in high school, Hamdan is training as a mechanic and hopes to find work to supplement his family’s income. “My father used to work in Israel, but he’s been unemployed for years now.”

Said Hamdan’s injury is neither new nor surprising. Every week, Israeli soldiers shoot upon and abduct Palestinian workers in the border regions of Gaza.

Some of the recent IOF aggressions against Palestinians in the border regions include:

–Naji Abu Reeda, 35, shot in the leg on the morning of 25 March as he worked collecting rubble 500 metres from the border for re-sale.

-On 20 March, around 2:30 pm, Israeli soldiers arrested 17 Palestinians collecting rubble in the Beit Hanoun industrial area approximately 900 metres from the border, including:

Those venturing to the border regions to gather rubble and steel do so as a result of the siege on Gaza which, along with Israel’s 23 day winter war on Gaza, has decimated Gaza’s economy, including 95 percent of Gaza’s factories and businesses, according to the United Nations. Additionally, these recycled construction materials are vital in Gaza where the Israeli-led, internationally-complicit, siege bans all but under 40 items from entering.

The barbaric siege prevents vitally needed construction materials from entering Gaza, where over 6,400 houses were destroyed or severely damaged in the Israeli war on Gaza, and nearly 53,000 sustained lesser damages. Hospitals and medical centres, schools, kindergartens and mosques are among the other buildings destroyed and damaged during the Israeli war on Gaza.

Since Israel’s war on Gaza, only 0.05 percent of the monthly average prior to the siege had been allowed into Gaza as of December 2009.