The latest in a growing number of non-violent protesters shot by well-armed Israeli soldiers, three unarmed demonstrators –two Palestinians and one international–were injured this afternoon by Israeli soldiers’ firing with live ammunition at a protest east of El Meghazi, central Gaza Strip.  One week prior, Mahmoud Shawa, 19, was shot just below his knee by an Israeli soldier while demonstrating near the Nahal Oz crossing, eastern Gaza.  March 30, four Palestinians were shot by armed Israeli soldiers while participating in non-violent demonstrations against the Israeli-imposed “buffer zone”.  Three of the four were injured by bullets or bullet shrapnel to their legs, while the fourth was shot in the head.

Bianca Zammit, 28, from Malta was one of three injured by the Israeli soldiers’ shooting today. Zammit, an International Solidarity Movement (ISM) colleague was standing roughly 3 metres to my left, both of us roughly 50 metres from the Green Line border fence separating Gaza and Israel.  At the time that Zammit was shot, she was filming the Israeli soldiers’ assault with live ammunition on the unarmed Palestinian protesters, mainly youths, in front of us, who had run up to post flags on the border fence and re-claim the land Palestinians have been run off of by the unilateral Israeli declaration of a no-go zone.

In theory, this “buffer zone” is 300 metres, running from south to north on the Palestinian side of Gaza’s border. In reality, the off-limits area annexes far more than the 300 metre band of land the Israeli authorities state are off-limits: Palestinian civilians have been killed and injured by Israeli shooting and shelling up to 2 km from the border. As well, workers gathering stones and steel for re-sale for construction purposes are routinely abducted by Israeli soldiers and taken into Israeli detention. These people have been driven by siege-induced poverty and desperation to this low-paying work in the border regions.

Shortly before Zammit was shot, a young Palestinian woman –Hind al Akra, 22– participating in the protest was hit by shrapnel from an Israeli-fired bullet which struck nearby her.  The shrapnel lodged in her stomach. At the time of treatment in Deir al Balah’s Al Aqsa hospital, it was deemed that Akra would likely need surgery to remove the shrapnel from her abdomen.

The first to be shot today was 18 year old Nidal al Naql, a teen among those nearest the fence.  He was targeted in his right thigh.  Thankfully, the bullet missed any artery–the terrain of the area is rolling, rough ground, making the evacuations of the injured more time-consuming and difficult. 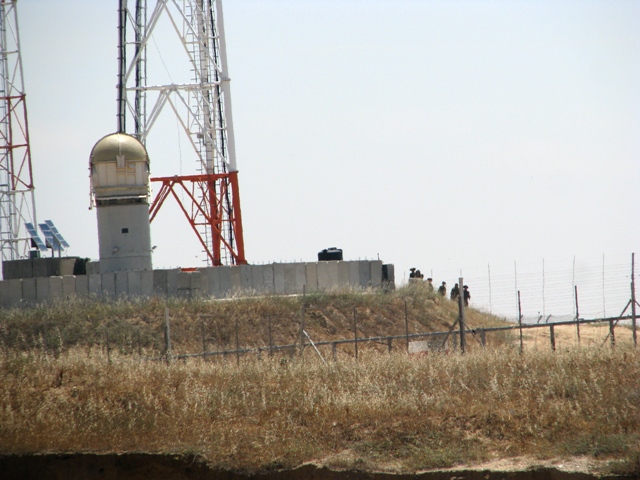 *[photo: Rada Daniell]: a remote-controlled machine gun tower, one of many along the border fence used to shoot at Palestinians, including farmers, workers and civilians on their land.

*[photo: Rada Daniell]: Nidal al Naql is carried off after being shot by an Israeli soldier.

*[photo: Rada Daniell]: Bianca Zammit is carried off after being targeted by an Israeli soldier.

*[photo: Rada Daniell] Bianca, after having been treated, is visited by Mohammed Ot’ti, one of four demonstrators shot by Israeli soldiers during non-violent Land Day protests on March 30, 2010.

Like those youths shot and injured on Land Day, and the youth of last week, Zammit says when she is healed and able to walk, she will return to the demos, as will the Palestinians, every week, raising their voices against the annexation of their land and targeting of civilians.

19 thoughts on “What threat did I pose the israeli soldiers?”