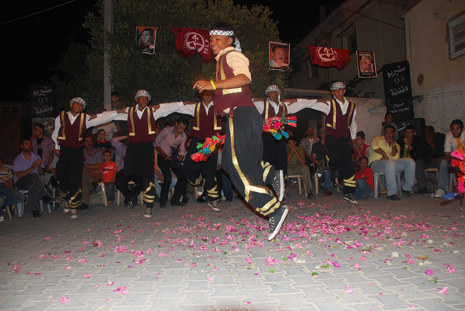 Oct 31, 2010 (IPS) By Eva Bartlett– “I’d planned to have my wedding party on a Thursday night, when more people could come, and stay later. But because the Dabke dancers weren’t free then, I held it on a Tuesday,” says Mohammed Ghronaim, 27, from Deir al-Balah, central Gaza.

“Canaan Dabke is a talented group,” he says. “But everyone loves them all the more because they are children and dance in an amazing way. Most of the people who came to my wedding probably came just for the Dabke.”

Dabke, the traditional Middle Eastern line dance of agile steps, stomps and jumps, is still today an important element of Palestinian culture, and is virtually imperative to wedding parties. While professional groups abound in Gaza and Dabke is good business during wedding season, one group has made itself known for its unique style and energy.

Founder and trainer of Canaan Dabke, Yasser el-Izzerai, 31, lives in Deir al- Balah and started the group on a whim and out of his own pocket.

“There was a small party at the school nearby and some children around 7 years old danced Dabke. They weren’t terrific, but I saw their potential and decided to train them,” says Izzerai. “We trained at my home because there were no clubs or other places for us to use.”

After a year of practice, he says, they danced at a large wedding party in Deir al-Balah. “The crowd loved them, and that was the real beginning of their passion for Dabke.” 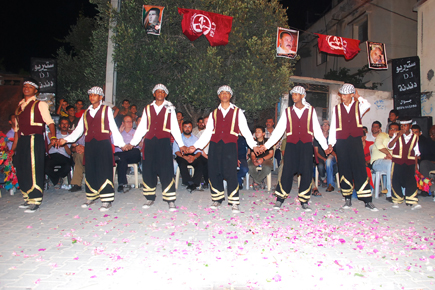 “Because the kids all come from simple families, they couldn’t afford uniforms, not even the black pants,” says Izzerai. “But so they would feel more like a group, the boys borrowed from their friends, even if only for the day of the party.”

Years later, Canaan Dabke has a name renowned throughout Gaza, and uniforms to match.

“A guest at a wedding party they had danced at donated clothes to the boys,” their trainer recalls.

“Black boots up to the knees, black pants flared above, loose white shirts with vests over them,” he explains, “and of course the Palestinian Kuffiyeh,” he says of the traditionally black and white checked scarf that has come to symbolise Palestine.

Continually booked, the Canaan group appears at wedding parties all over the Strip.

“We add flair to the weddings. Not only by our dancing, but we brings lights, decorations, and even flowers to use during the youths’ performance. We want our audience to relax, forget their problems. Everyone in Gaza has lost family members to Israeli attacks or prisons. Everyone suffers under the siege.”

Including the group itself.

“When the Israelis were here, it was hard to get to the parties, because Gaza was divided into three parts: southern, central, and northern, with Israeli military checkpoints cutting off the roads,” recalls Izzerai.

“Once, we had a wedding to dance at in Gaza, but the roads were closed from Deir al-Balah,” he says. “So I hired a donkey and cart and we went along the beach to Gaza. We made it in time to dance at the wedding.”

Years later, under the Israeli-led siege on Gaza, Canaan again resorted to donkey and cart travel.

“It was during the hardest time of the fuel crisis. People still get married, even under siege. Because of the lack of fuel, there were few taxis, so we had to travel again by cart to our engagement,” says Izzerai.

By now, the group’s fame has spread from Gaza to other countries.

“We’ve received invitations to dance in Norway and Italy, but we’ve never gone, because we can’t get out. The borders are closed, even to dancers.”

Israeli authorities maintain that the siege on Gaza, imposed since early 2006 and severely tightened since mid-2007, is for security reasons.

But the siege continues to prevent the ill from accessing medical care and treatment, students from reaching universities, families from re-uniting, workers from going to former jobs outside of Gaza, and even cultural groups from leaving Gaza.

Dabke groups like El-Funoun have at times been able to leave the Israeli- occupied West Bank to dance in other countries. The demand for Palestinian Dabke is real, and the opportunities for Gaza’s Canaan Group many, if they were able to breach the Strip’s sealed borders.

“We want to introduce people to Dabke, show them our beautiful culture. That’s our biggest dream: to dance around the world,” says Izzerai.

Over the decades of Israeli occupation, many feel Dabke is a form of resistance under occupation, keeping Palestinian culture and tradition alive in the worst of circumstances.

Yet for the Canaan Group it is much simpler.

“There’s nothing political about our group,” says Yasser el-Izzerai. “We just want to express the beauty of Palestinian culture to whomever we can.”

2 thoughts on “dancing under siege”