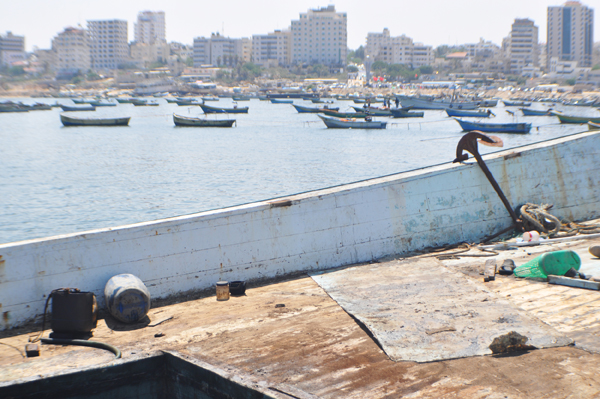 GAZA CITY, Jun 12, 2011 (IPS) By Eva Bartlett– In Gaza’s main port, beyond the newly-built memorial to the Freedom Flotilla martyrs, Gaza’s fishermen prepare to go out trawling at shallow depths in Palestinian waters. Other fishers stay on land to mend nets and fix boats damaged or destroyed by Israeli navy gunfire, shelling, water cannoning and even ramming. Such moves as the opening of Rafah have done nothing for Gaza’s fishermen.

Tracings in the sand reveal where a damaged hassaka (a small speedboat or smaller hand-paddled boat) sat for repairs from an Israeli navy machine gun assault on Jun. 1 this year. “There were 25 bullets in both sides of the boat, as well as one in the engine,” Kabarati says. “Two fishermen work from it, Ramadan Zidan, 51, and his son Mohammed, 20. They weren’t even out at sea, they were just beyond the harbour.”

Down the sandy road to the dock for larger fishing boats, Farej, 23, stands aboard a larger, roofless fishing trawler, the detached roof splayed across a port wall opposite the boat.

“Our nets were in the water when the Israeli gun boat came at us,” says Farej, one of the fishermen on board the trawler less than three miles off Gaza’s coast when assaulted by the Israeli navy on May 26.

“The Israeli soldiers shot at our nets which we tried to pull in,” he says, noting that the severed nets disappeared into the sea. “Then they rammed our boat, knocking the roof off.”

With ample deck space for pulling in catches and sorting the fish for storage, most Palestinian fishing trawlers are between 15 to 20 metres, with a steel “umbrella” over the work area. “The roof fell down on my brother Raed, but we couldn’t reach him to help him. The Israelis kept firing on us and on the area of the fallen roof,” Farej says.

“They kept threatening to take us to Ashdod,” he says. “They kept cursing at us and taunting us.”

While Raed, 28, survived the attack with a broken leg and injured back, Farej worries how his brother will feed his five children while incapacitated.

“I was studying business management at university,” Farej says. “I had to quit because I couldn’t afford the fees and we need my income to feed our families.”

Sufyan, 43, works on the same trawler. “Just the day before that we were water cannoned by the Israelis,” he says. “They doused us with high-powered water for about 30 minutes, broke our GPS system and ruined anything electrical on board. We were only three miles off the coast.”

Under the Oslo accords, Palestinian fishermen have the right to fish 20 nautical miles off the Gazan coast. This limit has been unilaterally micro-sized by the Israeli navy by lethal imposition via gunfire, shelling and water-cannoning. A year ago fishermen scarcely caught any fish when just six miles out. The prospects for catching fish are all the more dire at the new insufficient three-mile limit.

On the evening of May 30, Ragab Hissy’s 15.5 metre trawler was again attacked by Israeli water cannoning, gunfire and ramming. “They water cannoned us so strongly and for so long that we hid inside, under the deck,” says a 32-year-old fisherman who gives his name as M. “While we were hiding, the Israeli gunboat rammed us.” He points out a newly-replaced slot of wood in the boat’s hull and a dent in the steel framing the hull where the Israeli gunboat rammed his trawler. “The Israeli soldiers were shouting at us, swearing at us and cursing Islam,” he says. “We were less than three miles out from this port. The Israelis accused us of waiting to go out further at night. They told us, ‘you have to go back to 2.5 miles from the coast so that you don’t cross three miles’,” M says.

“Since 2005 we have had serious problems from the Israelis while fishing,” says Sufyan Koolah, from the same trawler. “This trawler was badly damaged in 2007 by Israeli gunfire. It cost roughly 20,000 dollars to repair it. During 2008 we lost much of our fishing equipment and nets to Israeli attacks.”

A father of ten, with three children in university, Koolah will be out of work for the next two months, the amount of time he says it will take to repair the trawler. “Seventeen people work on this boat and will be out of an income, not just me and my family.”

Families like Koolah’s, Abu Ouda’s, Hissy’s and the countless other nameless of Gaza’s roughly 4,000 fishermen face unprovoked Israeli navy assaults on a daily basis but continue to trawl the waters for food and income for their families.

“Three miles is too shallow. People swim at three miles. We need to be able to fish like we did in the past, beyond ten miles and up to 20 miles,” says M, the fisherman on Hissy’s boat.

Catches these days are neutered versions of Palestinian fishermen’s former hauls. Unable to breech three miles, Gaza’s fishermen are left to harvest undersized fish seeped in the pollution of Gaza’s sewage run-off. The greater numbers and quality of fish lie at least six miles out.

“Between March and June, large schools of sardines migrate through Palestinian waters over ten miles out,” says Nizar Ayash, director of Gaza’s Fishing Syndicate. “They are abundant in number, all fishermen can benefit, and they were traditionally Gaza’s cheapest source of quality protein.”

In a May 2011 report, the International Committee of the Red Cross (ICRC) cites poverty among Gaza’s fishermen at 90 percent, the poorest earning less than 100 dollars per month, an increase of 40 percent from 2008.

“In the last five years, at least seven fishermen have been killed by the Israeli navy,” Nizar Ayash says, estimating tens more have been injured and over 300 arrested while fishing in Palestinian waters. “But they will keep fishing, they have no choice.” 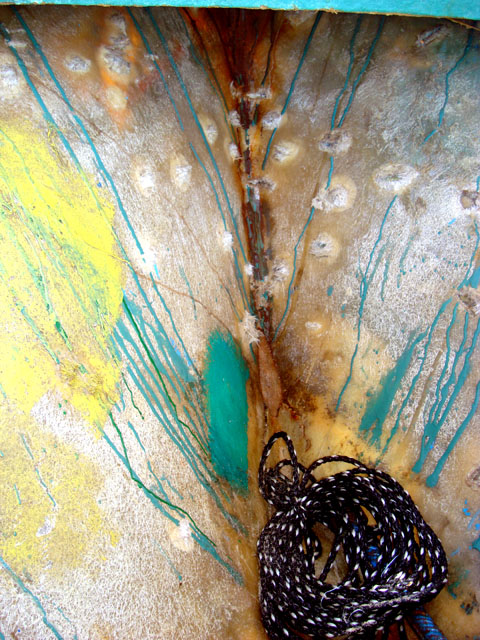 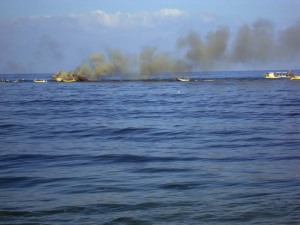 *remains of a fishing trawler shot and shelled by the Israeli navy in August 2009
One Year Later, Young Fisherman Still Trying to Heal

The Words of Fishermen Under Fire  [with photos]

attacked by the Israeli navy: a shelled Palestinian fishing trawler is “completely destroyed”   [with photos]

6 thoughts on “Fishing Under Fire in Swimming Waters”