Two days before Land Day and the GMJ, we visit Sabra and Shatila. An impoverished Beirut neighbourhood and Palestinian refugee camp in the same vicinity, Sabra and Shatila are known for the savage massacre of Palestinian refugees and poor Lebanese Shiites (internally displaced from southern Lebanon by the Israeli occupational brutalities) which killed anywhere from over 3000 children, men and women—the assassins killed out of the sight of media and covered their tracks with mass graves, so the precise numbers of martyred are not known.

From September 16 to 18, 1982, Phalangists, a Christian Lebanese militia aided, trained, and supported by the Zionist state, slaughtered victims locked into the camp area by surrounding Israeli occupation forces. “It was a killing spree,” Ali, a Lebanese, tells me. He outlines the basics of the massacre and events leading up to it.

After the withdrawal of Palestinian Liberation Organization (PLO) resistance fighters from Lebanon, via an American-mediated agreement under which the Lebanese pledged to protect the camps, camp residents were no longer allowed weapons to defend themselves. The September massacre was allegedly an attack to avenge the killing of Bashir Gemeyel, but the Palestinians weren’t guilty of his assassination, and the Phalange and Zionist leaders knew this.

“It was a part of the ethnic cleansing of Palestinians,” he says, pointing out the complicity of the Israeli occupying army in Lebanon.

“They surrounded the area, closed off the exits, and lit flares during the night to aid the attacking Phalange assassins.”

Badil notes that an Israeli General “provided Lebanese Forces Intelligence with aerial photographs to arrange entry into the camps.”

An excerpt from American journalist Janet Lee Stevens, provides a glimpse into the horror of the slaughter:

I saw dead women in their houses with their skirts up to their waists and their legs spread apart; dozens of young men shot after being lined up against an alley wall; children with their throats slit, a pregnant woman with her stomach chopped open, her eyes still wide open, her blackened face silently screaming in horror; countless babies and toddlers who had been stabbed or ripped apart and who had been thrown into garbage piles.

In the makbara Shuhada Sabra wa Shatila (Sabra and Shatila martyr’s cemetery), a large sign attempts to honour the murdered, when nothing can ever do so. Although a cemetery, it is without gravestones, save a sole marble marker on which is written: the massacre of Sabra and Shatila, 1982.

The grass is tall and trees sway gently in the breeze of the football-sized area, and as I note this I am told that, in fact, children used the plot as a football field until recent years, not knowing that the Phalange had covered hundreds of massacred bodies with earth in this plot, attempting to cover their atrocities.

“But there were still many corpses in camp streets,” Ali tells me, and independent journalists’ accounts corroborate this.

They were entire families, they were elderly, they were women raped before being slaughtered, they were unborn children savagely snuffed with the stab of a knife or the bombing of a building.
Standing on this plot of bloodied land, the bodies of so many more victims of Zionist savagery, and trying to grasp the enormity of the 1982 massacre, I come to the signs—with their photos of the lifeless bodies of slaughtered children—commemorating still more massacres of Palestinians and Lebanese, from the Israeli occupation of much of Lebanon, to the Israeli assault on Lebanon in 2006. Qana 1986 and 2006, Marwaheen 2006, Chiah (“Sheyah”) 2006…

As I research later, the massacres are more and still more. During the 2006 Israeli war on Lebanon, 34 days of bombing from warplanes, war helicopters, UAVs, tanks and warships, over 1100 were killed. Throughout, the IOF committed massacres throughout Lebanon. Rweiss (southern Beirut), ‘Aitaroun, Mansouri, Marja’youn, Dweir, Zebqine, …bombing of homes, cars, bridges on or near which were cars, and the UN post in Khiam prison, killing 4 UN observers.

Qana, a village in the south, is known as the ‘town of massacres’. The village suffered massacres in 1996 and 2006, the former killing 106 civilians and injuring 110 more.

“It has a big cemetery, but not all of the martyred were buried there because many were blown to pieces,” Ali says. “The IOF bombed indiscriminately, bombed anything that moved. People were afraid to flee their homes for safer areas.”

Approximately 800 civilians were sheltering in a United Nations Interim Forces in Lebanon (UNIFIL) base in the village of Qana, South Lebanon. They had assumed – incorrectly – that since international law strictly prohibits the targeting of civilian structures and UN facilities they would be safe under UNIFIL’s protection. Just after 2 PM on April 18, a barrage of proximity-fuse shells crashed directly into the pre-fabricated building. Minutes later 106 people lay dead, many burned and dismembered beyond recognition.

“Israeli officials tried to deny the massacre, claimed it was an error. But they knew where the UN locations were,” Ali says. “The UN had already confirmed their locations. There were only civilians in the compounds.

A month after the massacre, reporters confirmed this:

UN officials had told Israel repeatedly that up to 9,000 civilians were taking refuge in their compounds. In that period, by the peacekeepers’ count, Israeli fire hit or came dangerously near U.N. installations or mobile units 242 times.

The Lebanese refugee women and children and men lay in heaps, their hands or arms or legs missing, beheaded or disembowelled. There were well over a hundred of them. A baby lay without a head. The Israeli shells had scythed through them as they lay in the United Nations shelter, believing that they were safe under the world’s protection.

In front of a burning building of the UN’s Fijian battalion headquarters, a girl held a corpse in her arms, the body of a grey- haired man whose eyes were staring at her, and she rocked the corpse back and forth in her arms, keening and weeping and crying the same words over and over: “My father, my father.” A Fijian UN soldier stood amid a sea of bodies and, without saying a word, held aloft the body of a headless child.

On 30 July 2006, the Israeli army bombed a 3 level home in Qana, claiming Hezbollah resistance were hiding in it, a claim proven false. The bombing massacred 27 civilians, among them16 children.

Two weeks earlier, on July 15—in the first days of Israel’s war on Lebanon—a combination of an Israeli warship strike and an Israeli helicopter attack massacred 23 civilians (among them 14 children and 7 women, 2 of whom were pregnant) fleeing their village, Marwaheen, in southern Lebanon.

In Chiah, Beirut, southern Lebanese were among the massacred on August 7, 2006, when the IOF bombed the multi-level building they’d taken sanctuary in—having fled the heavy bombing of the south. “Those families who escaped death in the south found it in Beirut,” Ali tells me of the 39 martyred in the Chiah bombing.

We leave the martyrs’ cemetery and walk through the narrow lanes typical of a Palestinian refugee camp.

“environmental health conditions in Shatila are extremely bad. Shelters are damp and overcrowded, and many have open drains. The sewerage system needs considerable expansion.”

The truths of refugee camp hardship reveal themselves in the leaking pipes and puddles of water flooding alleyways and streets, in the tangles of electrical wires dangerously low overhead, in the shoddy cement-block houses too small for their families and too closely layered for privacy, and in the stench of sewage and garbage yet to be collected, services in the camp being far below sub-par. In these drab conditions families live and children play—making toys out of street findings, playing in the lanes.

A beautiful elderly Palestinian woman allows me to photograph her, posing with her gracious smile and immense dignity. 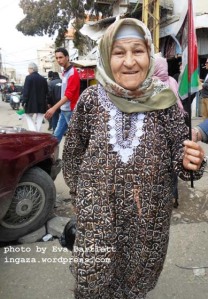 I speak with an elderly Palestinian refugee outside his shop. He is fluent in English and, with a charismatic smile, answers my questions about life in the camp.

My name is Ismail.

I was born in 1950 in Baalbec (Lebanon). Now I am working in my shop (a small grocery store). My family is from a small village about 2 km from Haifa. My family was expelled from there. They were farmers, we had only a small bit of land, 8.5 dunams, near the seashore.

The situation in the camp is very bad. Too much garbage in the street. The water is very bad, we are using salt water as utility water. We get plenty of skin diseases. The electricity is not good. We can’t work outside. If anybody passes away, we don’t have any place to bury them now. We have to take him out of Beirut, because this is a rule of the Lebanese government nowadays.

Things are getting worse. Before, the UN was giving service to all the refugee camps. Nowadays very few people can take benefit from the UN. Even if someone gets sick, he can’t go to the hospital. He will die.

His words don’t convey the extent of the difficulty of refugee camp life, which I learn more of in later visits to Beirut and Trablus (Tripoli) camps.

Since the original purpose of our visit to Lebanon is to participate in the Global March to Jerusalem, I ask if he’s been there.

I haven’t been to Al Quds. I hope I’ll go there some day, to pray in Al Aqsa. (They—the Israelis) won’t let me go back to my native country. 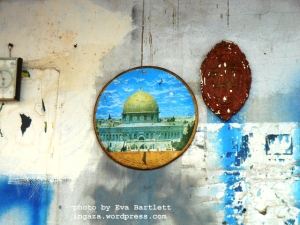 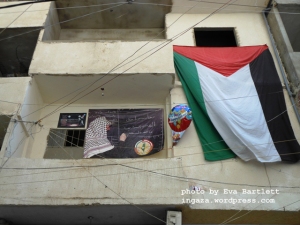 Images from the shelling of the UNIFIL FIJI BATT compound at Qana, South Lebanon

REMEMBERING THE MASSACRE AT QANA 1996

2 thoughts on “the Sabra and Shatila massacre”