“Gaza is an ancient centre of habitation that has survived for 4,000 years, at various times in the face of marginalisation and destruction. Today it represents an essentially urban economy, isolated and kept alive through external funding, the illegal tunnel economy, and the ingenuity and persistence of its people.” —UN press release, Aug 2012

Water facts from the Aug 2012 UN report (Gaza in 2020: a livable place?) on the steady decimation of Gaza and its rapid plunge to being an (even more) “unlivable place”:

-With no perennial streams and low rainfall, Gaza relies almost completely on the underlying coastal aquifer, which is partly replenished by rainfall and runoff from the Hebron hills to the east (but Palestinian and international NGOs, as well as Palestinian farmers themselves, have said that the runoff from east of the caged Gaza Strip has for years been cut by Israeli wells and containment pools strategically placed to deprive the Strip of water replenishment)

-90 million litres of sewage is dumped into the sea every day: only 25% of waste water, or 30 million litres per day, is able to be treated and re-infiltrated for use in green areas and some forms of agriculture.

-Current abstraction of water from the aquifer, at an estimated 160 MCM (million cubic metres)per year to meet current overall demand, is well beyond that. As groundwater levels subsequently decline, sea water infiltrates from the nearby Mediterranean Sea.

-Salinity levels have thus risen well beyond guidelines by the World Health Organization (WHO) for safe drinking water (the WHO reported 95% of Gaza’s fresh water was undrinkable). This pollution is compounded by contamination of the aquifer by nitrates from uncontrolled sewage…

-UNEP recommends ceasing abstraction immediately as it would otherwise take centuries for the aquifer to recover. Even with remedial action now to cease abstraction, the aquifer will take decades to recover. The Palestinian Water Authority (PWA) expects demand for fresh water to grow to 260 MCM per year by 2020, an increase of some 60% over current levels of abstraction from the aquifer.

-Longer-term solutions to the challenges of clean water and sanitation for the people of Gaza include large-scale seawater desalination plant(s), completion of strategically placed treatment facilities, construction and rehabilitation of water and sewerage networks, the wholesale availability in homes, schools and health centres of water and sanitation systems, and a regime for the management of solid and medical waste that is able to cater for the needs of an urban population.

The water problem in Gaza is dire, at the least, but also throughout occupied Palestine the Zionist Occupation’s unfair policy of water usage by Israelis and denial to Palestinians is prevalent and dangerous:

Water in Palestine: Not a Scarcity but a Distribution Problem

Even though there is enough water to go around in the Occupied Palestinian Territories, the discriminatory laws implemented on the ground by Israel mean that Palestinians are left with a trickle. According to the report “Troubled Waters: Palestinians denied fair access to water” published by Amnesty International in 2009, Israel uses more than 80 per cent of the water from the Mountain Aquifer, the main source of underground water in Israel and the OPT, while restricting Palestinian access to a mere 20 per cent. While average Palestinian daily water consumption barely reaches 70 litres a day per person, Israeli daily consumption is more than 300 litres per day. In some rural communities, like in the Jordan Valley, Palestinians survive on barely 20 litres per day and don’t have access to the water that flows in the pipes leading to Israeli settlements which are illegal under international law. 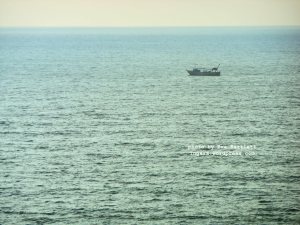 *Fishing trawlers just off the coast of Gaza, scouring sewage water for stock fish. Palestinian fishing trawlers used to delve as far as 20 nautical miles, or more, guaranteed under the Oslo accords. The Zionist navy now violently, unilaterally enforces a 3 mile limit by shooting on, shelling, water cannoning, and abducting Palestinian fishers, including children, from well within the illegally imposed 3 mile restriction.  The Zionist army does uses similar violent tactics to enforce their deadly unilateral no-go zone on Palestinian farmland.

how Israeli policies and attacks have ravaged Gaza’s agricultural sector

Lost in the Buffer Zone