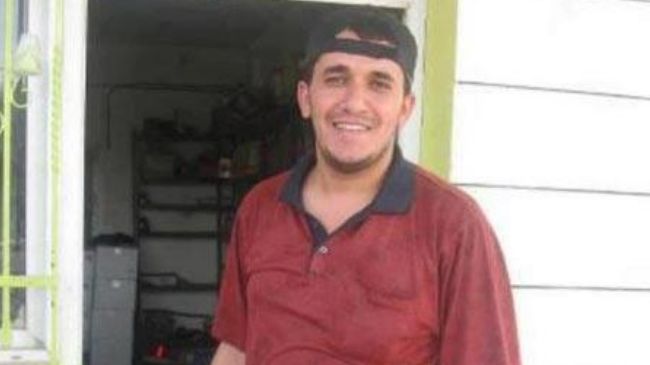 “Israeli officers tortured Ahmad Jaradat, a 30-year-old who died Saturday in Israeli custody, his lawyer and the Ministry of Detainee Affairs said Sunday.

Kameel Sabbagh, a lawyer at the ministry, said he was present at Jaradat’s last hearing on Thursday. The Israeli judge postponed the hearing for 12 days.

“When I entered the courtroom I saw Jaradat sitting on a wooden chair in front of the judge. His back was hunched and he looked sick and fragile.

“When Jaradat heard that the judge postponed his hearing he seemed extremely afraid and asked me if he was going to spend the time left in the cell. I replied to him that he was still in the investigation period and this is possible and that as a lawyer I couldn’t do anything about his whereabouts at this time.”

Sabbagh said in a statement that Jaradat’s psychological state was very serious and that he informed the judge his client had been tortured. The judge ordered that Jaradat should be examined by the prison doctor but “this didn’t happen,” the lawyer added.

The Ministry of Detainee Affairs said Israeli interrogators used hanging techniques and sleep deprivation to torture Jaradat in al-Jalameh prison, a day before he died in Megiddo prison.

Jaradat’s family, who have viewed his body, said there were traces of blood on the body. They rejected Israeli claims that he died of a heart attack.

The family said they were informed that an autopsy on Jaradat’s body was complete and would be returned to Hebron on Sunday evening through the Tarqumiya crossing.

A Palestinian doctor and a legal team from the prisoners ministry were present at the autopsy.”

father of 2 and a third baby on the way, Arafat Jaradat died on Feb 23 in an Israeli prison. Below are a number of articles on Arafat Jaradat.

It is notable, aside from his highly suspicious death (when his family says he was otherwise in good health with no prior conditions), that Jaradat was imprisoned for allegedly having thrown stones at illegal Zionist colonists.

A very quick scan of just one news site (Ma’an News), from Jan 2013 to present, results in a number of ‘incidents’ by the illegal Zionist colonists who number over 500,000 in occupied Jerusalem and the occupied West Bank.  The following are just some of many headlines, and just in less than two months.  The assaults (for decades) range from throwing stones and sewage at Palestinians, to running over Palestinians (including children), assaulting Palestinian shepherds, torching Palestinian cars and villages, killing Palestinians, tormenting the Palestinians of Khalil (Hebron) and around Nablus…

Jan 2013 to present, some of the illegal Zionist colonists’ aggressions:

Two-year-old Farah Nanseem was hit in the head, and his father and uncle were also hurt.”

2 Palestinians injured by settlers in Nablus

“Israeli settlers shot and injured two Palestinians in the village of Qusra south of Nablus on Saturday in the northern West Bank, a Ma’an correspondent said.”

Are any of these illegal Zionist colonists ever sent to prison, even for the killing of Palestinians?

And this young man, Arafat Jaradat, is imprisoned, very likely tortured and has died as a result of being accused by the Zionist occupation of throwing stones at the illegal Zionist colonists.

With 11 Palestinian political prisoners on long-term hunger strikes, including 5 who are in their 80 days, 2 of whom are over 200 days, and now over 4000 (of the 4, 743 Palestinians detained by Israel, including 193 children and 178 held under administrative detention) joining in a solidarity hunger strike, is the Zionist regime trying to ignite a third Intifada? By all accounts, if one of the long-term hunger striking Palestinian political prisoners is martyred in Zionist prison, that 3rd uprising will erupt.

“Palestinian prisoner Arafat Shalesh Jaradat died in Israeli custody on Saturday in Israel’s Megiddo prison. Jaradat, 30 years old and from the Hebron area town of Sair, was arrested last week from his home on suspicion of throwing rocks during Israel’s November “Operation Pillar of Defence” attack on the Gaza Strip. Jaradat was the father of two children, four-year-old daughter Yara and two-year old son Mohammad. His wife Dalal is pregnant with their third child.

Jaradat’s family told Palestinian news sources that he had been tortured during interrogation, while the Israeli media quotes sources from the General Security Services (GSS) that Jaradat had been seen on Friday “several times” by a doctor, who found nothing wrong with him. In contravention of medical ethics, doctors affiliated with Israel’s Prison Services participate in Israeli interrogations to ascertain the prisoner is well enough to continue being interrogated.

“Our information was that Jaradat was being interrogated and then he died,” stated Palestinian Authority Minister of Detainees Issa Qaraqe. “Therefore we call for an international investigation into his death, which may have resulted from torture.”

An Israeli Prison Authority spokesperson said that the cause of Jaradat’s death is unknown pending an autopsy to be conducted in the Israeli Forensic Institute Abu Kabir, although the cause appears to be cardiac arrest. A representative of the PA and the family are reportedly to participate in the autopsy.

Following news of Jaradat’s death on late Saturday afternoon, marches took place in Sair and Ramallah, while clashes with Israeli forces were reported in several areas throughout the West Bank. A press conference on Jaradat’s death was also held by the national and Islamic forces in the Gaza Strip.

Palestinian prisoners have declared a one day hunger strike in solidarity with Jaradat. A general strike will also be observed in the West Bank’s Hebron district.”

“Jaradat, according to Shin Bet, suffered from various health problems prior to his arrest, including back aches and injuries in his leg and stomach, sustained from a rubber bullet and a tear gas canister.

However, family members told Ma’an that Arafat was in good health before his arrest and did not suffer from any diseases or health conditions.

“Arafat was taken directly to a prison far from his residential area. He was taken to al-Jalama prison in the north instead of being taken as usual to interrogation centers close to his area of residence. He was held there for four days before he was transferred to Megido prison,” his uncle Mousa Jaradat said.

Arafat was the father of two children, Yara, 4, and Muhammad, who is two years old.

Arafat’s wife, Dalal, told Ma’an that an Israeli intelligence officer brought him back to his home minutes after being arrested and told him to bid farewell to his children.

“For that reason I was worried. My husband was detained several times before, but this time the intelligence officer talked in a bizarre way,” she said.

PA ministry of detainees official Ziad Abu Ein is scheduled to meet with the family on Saturday to inform them about arrangements for delivering his body for burial.

Abu Ein said that the Ministry of Detainees would request that a Palestinian doctor representing the ministry examine the body and conduct an autopsy.

He called on the World Health Organization and the International Committee of the Red Cross to take part in the examination.

Jaradat was arrested this week under suspicion he was involved in stone-throwing that had wounded an Israeli settler in the occupied West Bank, the Shin Bet said.”

“Some 4,000 Palestinian prisoners in Israeli jails launched hunger-strike action on Sunday to protest the death of Arafat Jaradat, who died in Israel’s Megido jail a day earlier.

A spokeswoman for Israel’s Prison Authority told Ma’an that around 4,500 prisoners in Israeli jails are refusing food from prison authorities.”

Arafat Jaradeh, 30-year-old man from Sa’eer village to the north of Hebron, has died this evening after his arrest 6 days ago. During the past six days, Arafat was subjected to continuous hours of interrogation and different means of physical and psychological torture day and night to pressure him to surrender. His body ended up surrendering to death.

A little while ago, we lost 29-year-old Ashraf Abu Thare’ from Hebron who fell in coma 10 days after his release from Ramleh Hospital Prison in November 15, 2012 until his death on January 21, 2013. He served a sentence of six and a half years in Ramleh prison.

As the Palestinian prisoners’ rights group Addameer recently reported, “Since 1967, over 200 prisoners have died in captivity, fifty-one of them from medical negligence. Alarmingly, there is a recent trend of prisoners who have died shortly after they are released from medical complications that went untreated during their detention.”

Will Samer Issawi be the next victim of medical neglect by the Israeli Prison Service?