Driving to Gaza one morning, the shared taxi enters a traffic jam outside the UN school. The street is jammed with children, cars trying to butt ahead, a motorcycle sitting in the middle of the mess, clogging everything.

Roadside vegetable vendors: spinach, cauliflower, romaine lettuce, oranges imported from Egypt because the vast majority of Gaza’s trees have long since been bulldozed by the Zionists.

A young man jogs along the sand, past beached fishing boats. Those boats that have ventured the few kilometres out, risking Zionist navy attacks, are not visible through the heavy fog descending. Hassaka fishers 1/2 km out, valiantly fighting choppy water and cold for whatever meagre catch can haul in.

A refugee camp rider gallops his horse along the water’s edge.

A big tour bus filled with children passes –the company makes a deal with schools, kids pay each month. No actual school buses. “We get the junk from Israel,” Emad explains.

Past a burning garbage bin, nauseating smoke: people burn trash here because its easier than waiting for it to be collected, as it often is not.

The driver stops every time he sees a potential fare—backing along highway to check…in vain. Passengers put up with this delay: the cheap fare we pay means we have to tolerate the trawling. The driver inevitably doesn’t own the vehicle, just works for a company, so needs to maximize his fares, in order to earn whatever paltry salary he can for the day.

He whips down highway, playing chicken with oncoming traffic as he tries to make up for lost time.

Over low hills that are central Gaza

Over the newly re-constructed coastal bridge, still being optimistically hand-painted red and white checks, as bright and new looking as the felled inner bridge (also only recently re-constructed before its re-destruction in Nov 2012).

Past plots of grape vines, twisted and arid—its not grape season, but when it is, these plots provide Gaza’s best grapes.

Past battered wooden lifeguard huts on empty beach. In 2 months the beach will swarm with people desperate to cool off… equally desperate for some sort of recreation in a Strip devoid of theatres, bowling, any ‘normal’ universal recreation, where even tv reception is marred by zananas (drones) above.

Two young men collecting used metals and old batteries clog the road with their rickety homemade tuktuk, slowing our driver, who immediately guns it upon passing them.

A donkey cart and a toddler pushing his tricycle into the road again slow our driver. He curses.

Children walk along the road –there are no sidewalks on most busy streets –from their early morning shift of school, make room for 2nd shift in overcrowded schools.

Past the 2 schools heavily damaged in the bombing of the Ministry of Interior building, adding to the already critical schooling crisis…

Past the Red Crescent cultural complex, bombed by the Zionists in Jan 2009 and still not re-built, only a shell of new construction. And the likewise bombed Quds hospital, thankfully functioning.

Two female university students, anxious to get to classes on time, argue mildly with driver who has delayed them in his search for fares. “I was going 140 on the coastal road, wasn’t I?” he defends. 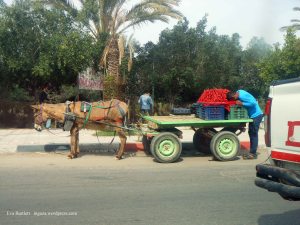 A youth sells strawberries outside Gaza’s two main universities: they sell for almost nothing; these succulent strawberries flood the markets, cut off from their former European markets. The Zionist state has banned exports from Gaza since 2006, save a paltry amount now and then for propanganda purposes.

Past the Nusseirat hilltop café with the best view of Gaza’s sea and the Gaza valley, a quiet place for a glass of fresh lemon juice, whose owners and workers treat us life family, and whose modest chipped walls only recently have been re-painted.

Past the rusted MAERSK container, around which a shelter has been constructed, equally weathered.

Back in Deir, trash is still burning, adding to who knows how many other pollutants Gazans are choking in. 80 million litres of sewage in the sea daily, and then seeping into the aquifer, Zionists’ bomb chemicals in the soil. Diesel fumes from taxis and the generators needed for the power cuts every 8 hours.

One Day at the ATMs:

“Askeriya, willa mehdiniya?” a woman asks me. Police or civilian employee? She, a mehdiniya, is waiting for the civilian pay to be issued through the bank. The police and related salaries were apparently issued first.

Men are crowded around one another, overlapping… Some men are telling a man using the second of two ATMs to push the green button, leaning in close as he does his banking. No privacy or personal space, but no one is put out by it, no worries of being mugged or pick-pocketed here. For all the Zionist bombs that are dropped here, Gaza, Palestine, I have felt safer here than back home.

Oh, the “angry Arabs” image that Zionists and the ignorant like to portray… it doesn’t exist here.

Frustrations do, being exasperated like any human in inhumane conditions. But people here act and live the opposite of my own inclinations were I subject to a lifetime of oppression, the killing and imprisonment of my loved ones, and just a generally unfair life full of missed opportunities…I would be no where as loving and forgiving as people I meet here are.

I give up on this bank, the lines not moving, and go to a different ATM, also with long lines, all men this time. “Come here, to the front,” a man ahead of me in line gestures.

“No, go over there, to the front of the other line, it’s moving quicker,” another man tells me.

I’m conflicted: I don’t want to jump the line. Yet, here, in bread lines and apparently in bank lines, women are not meant to wait with the men, they go ahead and make their own line, which in many cases tends to be shorter or non-existent.

A man solves my indecision, gestures me to follow him, like a lost pup, to the front of the left line, in case I hadn’t understood the other guy.

The person at the ATM finishes and another steps aside to usher me forward.

Yet, even as people are eager to help me, a woman, a visibly foreign woman, get through the sometimes muddy waters of cultural appropriateness, they themselves are exhausted, anxious, desperate for their own money to be given to them. Many have been waiting for months for part or all of their salaries, with no other income.

These lines, as Palestinians wait for their money to be delivered and dispensed from the bank, are another attempt at degrading them, killing their will, stealing their dignity. They don’t allow it, but the anxious crowding that comes with waiting for hours at…an occupation checkpoint, a closed border crossing, a food-aid depot, a depleted bank ATM…these all attempt to rob Palestinians of their dignity, rights, time, patience.

I grab a shared taxi to Sahaa, to get some herbs for tea and more zataar, the ground wild thyme and sesame grind eaten with gorgeous Palestinian olive oil.

Another passenger gets in, recognizing the driver and jumping into dialogue with him. “Tfudl,” (here) he says shoving the shekel (roughly 25 cents) at the driver, grinning. “La, walla,” (no, really, I can’t take it) replies the driver. Tfudl. La, walla. Tfudl. La, walla.

I miss the end of the exchange but think the passenger won. He tells the drivers he has picked up some sort of construction work. “I make 60 shekels a day,” (roughly $15) he says, still smiling.

One thought on “excerpts from life in Gaza”