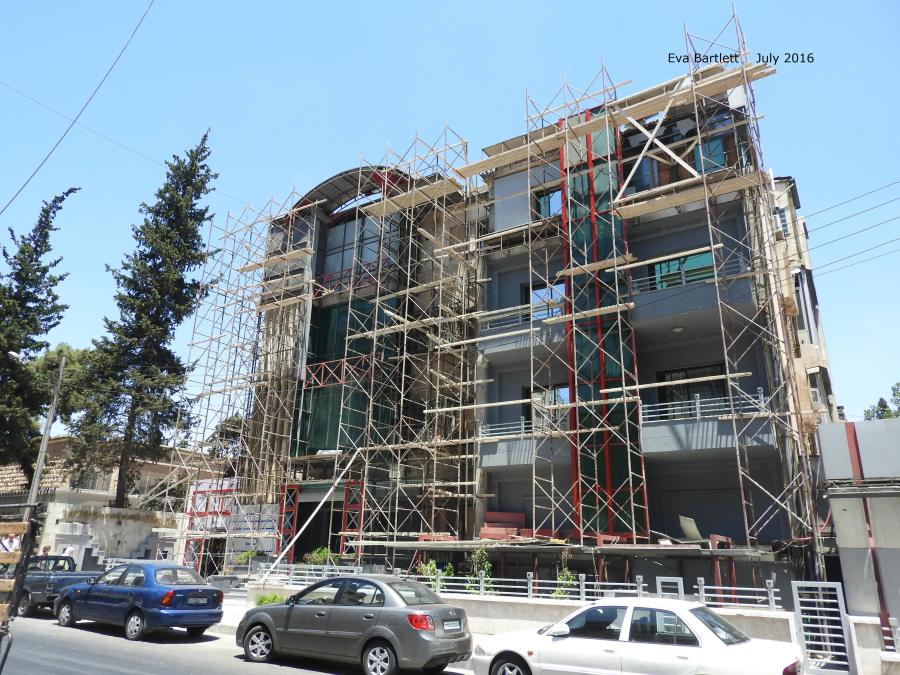 Al-Dabeet Maternity Hospital as of July 2016. The hospital was internally gutted in a May 2016 terrorist attack which saw an explosive land immediately outside, exploding vehicles parked nearby. Three women were killed in the attack; little media attention was given.

“…Wee Bana hit the ground running on 24 September with about 20 tweets, and has continued at a good rate ever since, managing over 120 on 4 October (including retweets). I myself used Twitter for weeks before I used hashtags and I was slow to learn the jargon. Bana, however, was up to speed from the beginning, and over the first two days we got #Aleppo, #HolocaustAleppo #MassacreInAleppo #StopAleppoMassacre. She is well up on acronyms like POTUS and OMG.

…There can be no doubt that the Bana project is a hoax, like the Gay Girl in Damascus and the White Helmets. The tweets are not the thoughts of a little Syrian girl wanting the world to save her from Russian bombs. Rather, they are the product of a sophisticated and well-planned operation designed to shape public perception of the Syrian and Russian operations, in order to justify Western intervention in Syria and facilitate regime change.”

Irrefutable proof that Bana does not know any English. Not even the simplest possible English. What a scam! #Syria pic.twitter.com/ytOc9ieb4R

Bilal Abdul Kareem: “Do I give a microphone, and a camera, to al-Qaeda members? Yes I do!”

Bilal Abdul Kareem: “Do I give a microphone, and a camera, to al-Qaeda members? Yes I do!” pic.twitter.com/Zkn8eW93Nm

“Clearly none of the authors of the report have ever been to Saydnaya, but I have. When I was British Ambassador in Damascus I had occasion to go to Saydnaya numerous times. I did not enter the prison, but I saw the building. I saw, for example, that it would be literally impossible for it to contain, what Amnesty say in their report, 10-20,000 prisoners at one time. 10-20,000 is a fair-sized town. The building which I saw in Saydnaya could not possibly accommodate more than 10% of those numbers. So, when they get this basic information wrong, you have to wonder about the veracity of the rest.” [LISTEN HERE]

One thought on “Interview on Apophenia: “A Talk with Eva Bartlett” [Part 1]”