Last week I had the honour of joining a number of incredible writers and orators in Derry, Ireland, in a panel, “Imperialism on Trial”. The five speakers were: John Wight, writer and host of Hard Facts; the former British Ambassador to Syria Peter Ford; author, journalist and broadcaster Neil Clark; former MP and host of Sputnik Orbiting the World, George Galloway; and myself.

Organized by Derry resident Gregory Sharkey, the panelists addressed a wide range of issues. As one of the speakers, author Neil Clark, wrote:

“Five passionate and well-informed speakers, who included the former British Ambassador to Syria Peter Ford, detailed the carnage and chaos that has been unleashed around the globe by the aggressive, warmongering policies of the US and its closest allies.

The full panel is online from RT’s livestream recording:

John Wight‘s talk was a poetic, searing condemnation of Imperialism and the corporate media, with literary and historical references included (much like Syria’s highly-educated Ambassador to the UN does in his speeches before the buffoons ala Haley, Power…).

His speech, fittingly, begins with a respectful acknowledgement of Resistance forces in Syria and around the world fighting against genocidal Imperialist forces. Excerpts include:

“Imperialism has run like a broken thread throughout human history, but so has Resistance to Imperialism. In this regard, I’d like to take a moment to pay tribute to the Syrian Arab Army, Hezbollah, Iran, Russia, in short, all those whose efforts in combating this genocidal project of a latter day Khmer Rouge has prevented Syria from being pushed into an abyss in which its minorities—people who can trace their presence in that part of the world back over a millenia and more—would have been gone, extirpated, annihilated.

Everybody on this panel tonight has felt the lash of the mainstream media. They call us ‘cranks’, they call us ‘stooges’, they call us “Putin’s puppets’, they call us ‘Assadists’. But yet, why do they attack us if we’re so marginal, why take the time to attack what we do? It’s because we ask the question ‘why’….”

Peter Ford spoke with the conviction of a man with years of experience in Syria, with firsthand knowledge of that country and others in the region. Noting that “Imperialism did not end when the colonies became free”, Ford said (excerpts):

“We now have a new, more insidious, but more powerful form of Imperialism. And this Imperialism hides behind words. As an ex-diplomat, I’m very sensitive to the clever use of words, they are so manipulative. The new Imperialism hides behind expressions like “protecting our allies”. When we went to war in Iraq, we were protecting the Saudis, the Israelis…these are our allies. Another term the new Imperialists hide behind to extend their hegemony is “defeating terrorism”. That’s a more recent one.

Another one they love is “defending human rights”, and this applies to the Left as much as to the Right, or “humanitarianism”. This is liberal interventionalism, and we on the Left have to be particularly alert to this one. This is the new version of carrying the white man’s burden. In each case, we are intervening militarily, or certainly using some sort of coercive diplomacy. We’re intervening in less-developed parts of the world which are not able, by and large, to strike back.

Britain is a prominent member of the grandly called “Global Coalition to eliminate ISIS”, and there are about 50 countries which are members of this coalition but it’s by no means the global. It excludes Russia, which has done more against ISIS than any individual member of the global coalition. It excludes China and many, many other countries, but they like to pretend that it’s global. They tell us that the purpose is to eradicate ISIS. Well, ISIS has virtually been eradicated for the last three months, but the coalition goes on. And indeed, just two weeks ago an American general told us that the coalition was there to stay in northern Syria because their job was to stop ISIS coming back. Well that’s an open-ended promise isn’t it that could go on forever.”

Neil Clark, likewise spoke truth on many issues covered up or distorted by corporate media. Excerpts:

“Libya in 2009 had the highest Human Development Index in Africa. Today it basically it is a hellhole run by various militias….The ultimate ignominy, the testament to the intervention launched by Sarkozy and Cameron & co, is the re-emergence of slave markets in Libya again. In fact, it’s a common pattern: every country where we’ve had these Western us-led interventions, the situation for ordinary people in those countries has actually worsened not got better.

We saw another classic example in Ukraine in 2014, a very similar scenario: the the US and its allies were supporting protesters against the government, and those protesters were led by the far right—by genuine far-right—people. …We’re talking about genuine ultra-nationalist borderline neo-nazis or bona fide neo-nazis at the forefront of these anti-government demonstrations. …We had a basic regime change in Ukraine against a democratically-elected government there.

George Galloway‘s speech was a detailed, animated, history lesson of Imperialist crimes, threats and lies, past and present. Excerpts:

“When I was born, the guns had only just stopped firing, from the British and American annihilation of the people of Korea. You heard the quotes from Eva, from Curtis Le May. ‘We burned down every town and village in North Korea,’ he said. ‘We killed 20% of the population of Korea. We threatened to launch thermo-nuclear warfare against them.’

We killed 1 million Chinese who had entered Korea to stop the advance of the British and American war machine, because they knew if they had conquered the north of Korea they would continued over the border to try to destroy the Chinese revolution.

And we wonder why North Korea is paranoid? Just because you’re paranoid, it doesn’t mean they’re not out to get you.

Our people may have forgotten the Korean war. The Korean people never did forget it.

How is it that the United States is somehow qualified to possess a nuclear arsenal that could end life on this planet for millennia to come, but other people, to defend themselves, may not produce one?”

My own talk at the Imperialism on Trial panel (also here) focused on media lies and war propaganda around Syria, and on the Imperialists’ fear-mongering rhetoric around, and blatant calls for the genocide of, Korea’s north, with reminders that the US and allies already destroyed the DPRK in the ’50s.

I also addressed the criminal sanctions on the DPRK, and some of the sensationalist stories put forth on the DPRK, sometimes even emanating from Washington. While I mentioned some of my August 2017 visit to the DPRK, I would here defer to the expertise of writers like historian Bruce Cumings, who wrote:

“The demonization of North Korea transcends party lines, drawing on a host of subliminal racist and Orientalist imagery; no one is willing to accept that North Koreans may have valid reasons for not accepting the American definition of reality.”

Researcher and writer Stephen Gowans offers a starkly different (aka factual) look at Korea’s north than that spewed by MSM hacks and politicians with no regard for the 25 million people at risk of annihilation thanks to American Exceptionalism. International criminal lawyer and writer Christopher Black also has vast knowledge about the DPRK, and has himself visited the country some years ago. Professor Tim Anderson wrote this article highlighting aspects of our August 2017 visit.

The bottom line, though, as Ajamu Baraka stated in our January 2018 interview:

“The US should not feel that it has the moral and political right to intervene, to determine who should be the head of any state, what kind of system they should organize. Those are questions and issues that should be left up to the people of any nation state on the planet. …No matter what the argument may be made by US authorities regarding the character of any state, we believe that allowing for those kinds of arguments to be used as a justification for intervention or waging war is morally unacceptable and politically has to be resisted.“

-on media lies and myths on Syria: Deconstructing the NATO Narrative on Syria

-Interview with Father Daniel in Syria: “There Never Was a Popular Uprising in Syria”

–Homs: “We wanted to protect our house”

–Vanessa Beeley videos, including testimonies of Syrians from eastern areas of Aleppo after liberation of the city.

–The Children of Kafarya and Foua are Crying in the Dark

-Omran Daqneesh (the Boy in the Ambulance):

-Israel’s Use Of White Phosphorous on Palestinian Civilians: 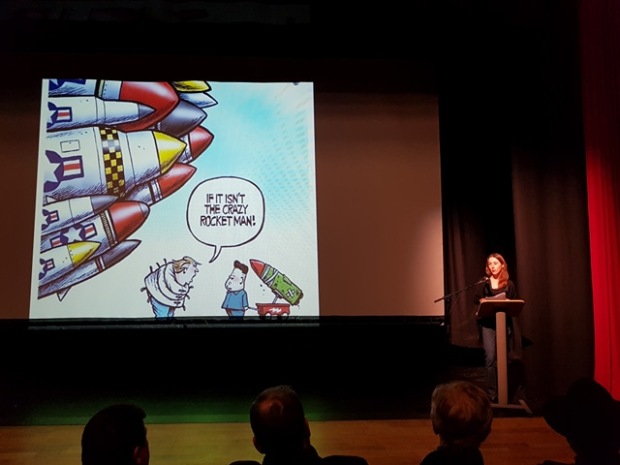