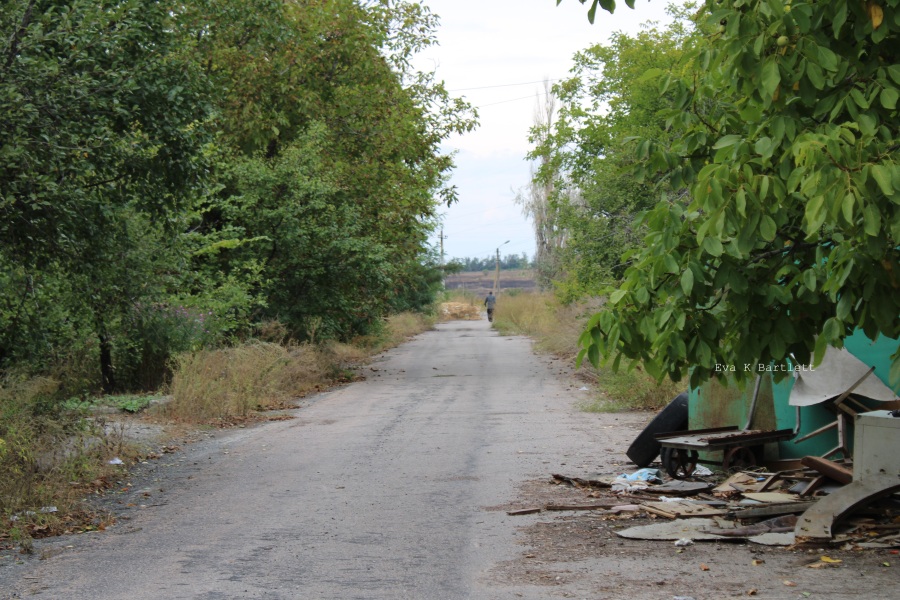 The other day I went to Krutaya Balka, a frontline village N of Donetsk and just outside of Yasinovataya. Around 15 people (mostly elderly) remain in this village, under Ukrainian shelling & heavy machine gun fire.

I spoke with those I could find at home while I was there. All told me they were constantly being assaulted by Ukrainian forces) by heavy machine gun fire and shelling. The machine gun fire not only punctures the walls but also can set fire to the roof, thus the whole house.

All said they had no where to go, so they stay, living in hell in an area otherwise quite lovely. Same as I heard in Zaitsevo, further north in the Donetsk People’s Republic.

The man in the photo (walking down the lane) allowed me to interview & film him, but without including his face because every day he has to walk across an extremely dangerous area to reach his home. He said he had already been shot in the leg by a Ukrainian sniper crossing in that area. But what to do? Where to go? So he daily faces death, walking without any sort of body armour.

This is the Ukraine our bought and sold media won’t tell you about, a neo-Nazi state that can slaughter and maim civilians in the DPR, and destroy their homes, at will without any repercussions at all. Just like Israel. The parallels are many.

Canada is not only politically backing Ukraine, but is on the ground training Ukrainian forces.These forces are destroying villages in the DPR, with Canada’s complicity. 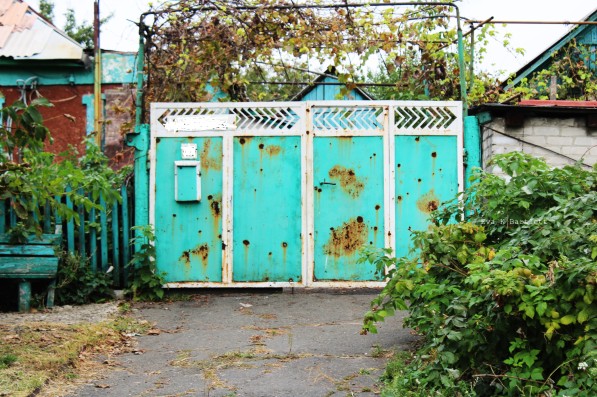 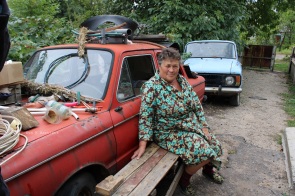 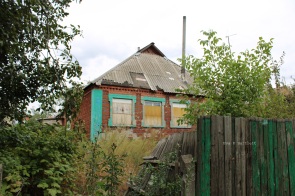 Related Links:
Resident of the Mine 6-7 District, DPR, Shows Damage to her Home After Ukrainian Shellings [VIDEO]
Zaitsevo (DPR) resident: “We are not living, we are surviving”
Village Resident Says Ukrainian Bombings Destroying Homes Street By Street [VIDEO]
DPR Defender: “(Ukraine’s) biggest mistake here was using weapons against civilians” [VIDEO]
Kiev forces fire at Vasilyevka pumping station, personnel hides in shelter – JCCC
*Ukrainian forces have been targeting this area for years
CANADIANTRAININGOFUKRAINIANFORCES:
*A New Group of Canadian Military Instructors Came to Ukraine to Train UAF Thugs (2018)
*Canadian Instructors Embedded in the UAF Spotted on the Outskirts of Donetsk (2017)
*Basurin: 50 American and Canadian Instructors Arrived Near Konstantinovka in the DPR (2017)
*Presence of Canadian Military “Instructors” Officially Legalized Across All of Ukraine (2017)
*200 Canadian Mercenaries Travel to Ukraine for Another “Master Class” (2017)
“The Canadian military will rotate colleagues who have been in Ukraine since 2015.”
CANADIANFUNDINGOFUKRAINIANFORCES:
https://www.stalkerzone.org/?s=canada
*Canada Will Give Ukraine a $7 Million Handout (2018)
*Canada Will Give $4.6 Million to the Ukrainian Armed Forces to “Reinforce Ukraine’s Resilience” (2018)
*Canada Will Send to Ukraine the Next Batch of Military Equipment (2017)