*I’m sure the title in Russian flowed better. I did amend it slightly to note and highlight that I was NOT attacked by a Russian, but likely an American/israeli.

Vadim Manukyan interviewed me regarding an incident that happened last Saturday.

**Please note: everyone I’ve met in Moscow, in Russia generally, has been *extremely* kind and helpful. The person who abused me had likely an American accent and Zionist motivations. I’m mainly posting this to both show ugly Zionism. This incident has delayed me a little in finishing off two important projects, but only due to the incident itself and taking the time to file a complaint with police**
Vadim Manukyan writes:

“Canadian journalist and blogger Eva Karene Bartlett came to Russia for tourism, journalism, including on the Moscow protests, and also to visit Crimea and Donbass.
It was she who owned the famous phrase about Moscow ‘opposition’:

‘These are the most apathetic of all the protesters in the world that I have seen.”

[*Note: My emphasis on apathy was NOT any call to violence, it was noting the lack of interest protesters displayed, compared to passionate and vibrant protests I’ve witnessed elsewhere, like Caracas for example.]

END_OF_DOCUMENT_TOKEN_TO_BE_REPLACED

My speech at the al Quds Day demonstration yesterday. 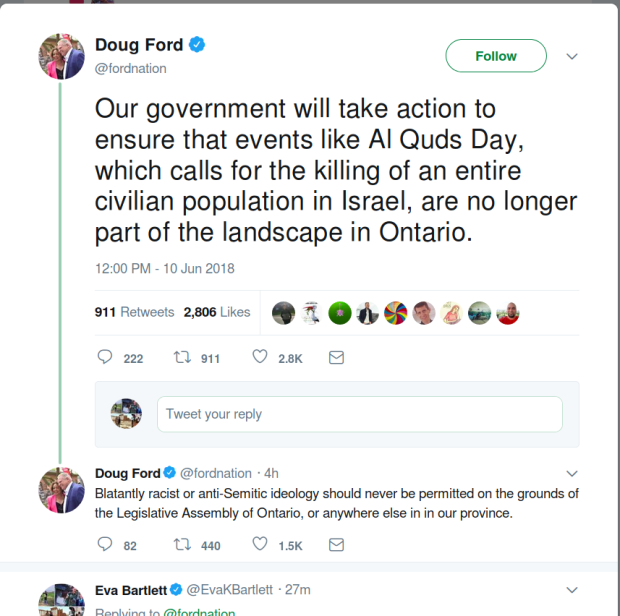 I’ve expressed the similar sentiments to these below in the past, but the subject came up again today on social media and, as it is of utmost importance, I’m posting the commentaries here.

Navid Nasr began the needed exchange with these words:

“Apparently, for a lot of both Palestinian and non-Palestinian advocates for Palestine and the Palestinian people, the road to Palestinian liberation lies through the destruction of Libya, Syria, Iraq, Lebanon, Yemen, Tunisia, and now Egypt. Good to know.”

“Islamist Palestinians… and that’s a direct outcome of saudi indoctrination, this is in fact a very familiar tune that we’ve all heard before during that woebegone cold war era when, at the time, the road to palestine essentially went through “communist afghanistan”; except that palestine was never at any point intended to be the destination of their GCC/CIA-sponsored jihad after the “liberation of kabul” just as it will never be their destination after their intended “liberation of damascus”; that was basically one of saudi arabia’s (and other gulf reactionary regimes’) main calling cards to recruit thousands of “arab mujahideen” to fight the soviet presence in afghanistan on behalf and at the behest of the reagan administration, and at the same time ensure the continued deliberate marginalization of palestine as a central cause for the arab and islamic worlds.

it’s the same brand of insidious indoctrination that prevails today and relegates palestine to the back burner while giving credence and urgency to whatever rotten cause that the saudi ruling dynasty chooses (or is instructed) to champion in their ever onward quest to serve the imperial interests of the west; everything takes a back seat to their unrelenting efforts to plant the seeds of discord and fan the flames of an all-out sectarian war across the region.”
END_OF_DOCUMENT_TOKEN_TO_BE_REPLACED

“This is where a segment of the so-called alternative media can play a valuable propaganda function for Western powers. Because such media are supposed to be independent, critical, non-corporate, the public tends to consider their reports as objective and unbiased.  One such “alternative” news service is “Democracy Now” hosted by Amy Goodman. Goodman is seen as something of a campaigning critical journalist shedding the light of truth on the depredations of the US government, corporations and the Pentagon. But a closer look at what Goodman’s “Democracy Now” is reporting on Syria shows that the purported critical broadcaster has become a purveyor of Western government propaganda. While the mainstream media’s propaganda function is obvious to the informed public, Goodman’s “Democracy Now” plays a more subtle role. Camouflaged with the trappings of critical, independent journalism, “Democracy Now” serves to sow powerful seeds of misinformation in a way that the “compromised” mainstream media cannot.

This misinformation from “Democracy Now” is valuable to the ruling elite because to many of its readers it is not seen as misinformation.
END_OF_DOCUMENT_TOKEN_TO_BE_REPLACED

Because I know so many of the people in that very small Strip, through my cumulative about 3 years there, I can’t stop myself from scouring the latest death toll updates to see if any of the families, farmers, medics, resistance I knew are among the martyred.

At the same time, I worry about new friends in Syria who–while Syria seems to have mysteriously fallen from the corporate media–still suffer from the terrorism of armed groups which shoot their mortars (filled with hundreds of jagged metal pieces, glass) on residential areas, on schools. Yesterday, a friend in Damascus updated me on the latest attacks, 9 shells on the city, which killed three civilians and injured (remember the jagged bits of metal and glass…) at least 20 [Sana reports on the mortars in Damascus and throughout Syria yesterday]. The same friend days earlier sent photos of minor damage to his home, not on ground level. Although like Palestinians, Syrians are taking this in stride, they are nonetheless, like Palestinians, living under terrorism.

Then there are the random, deadly car-bombings every now and then. And of course the presence of the despicable ISIS and their ilk, still be-heading Syrians who don’t live up to their fabricated version of religion, flogging others, be-handing others…This is all still going on, even though the corporate media does not deign to highlight these crimes.

I am grateful that more and more the reality of the Gaza genocide is getting told truthfully, with elements of truth even in some of the corporate media.

But, while there is supposedly a 72 hour ceasefire in place, without intending to be a sour pessimist, I have to say I’m waiting for the Zionists to violate it as they always do (see: Israeli Ceasefire Violations in Gaza and World Silence  and   Israel, not Hamas, is the serial truce-breaker, for examples, as well as my own experiences post 2009 massacre and 10 minutes into the ceasefire after the Nov 2012 massacre, as well as repeated violations in the days after, against farmers and against fishers).

The use of violence by the Palestinian resistance against Israel is legitimate.
END_OF_DOCUMENT_TOKEN_TO_BE_REPLACED

“Heavy artillery shelling into a populated area would be inherently indiscriminate…You just can’t aim that weapon precisely enough in that environment because it’s so destructive.”

While news-scouring, came across this Mondoweiss criticism of the same article, and was going to share it here. But they took the HRW and co approach of saying “Not that one should support Hamas rocket fire”…
So i cannot, in good conscience, share the article, nor anything more from them. Pity, because they raise many good points about the imbalance of the situation. But to deny any oppressed people their right to resist, whether or not their resistance is effective, is not solidarity, and is condescending.

“Moshe Feiglin, the deputy speaker of the Knesset, Israel’s parliament, has published a plan for the total destruction of the Palestinian people in Gaza.

His detailed plan, which calls for the use of concentration camps, amounts to direct and public incitement to genocide – a punishable crime under the Genocide Convention.

In a 1 August posting on his Facebook page, Feiglin, a member of Prime Minister Benjamin Netanyahu’s ruling Likud Party, calls for the “conquest of the entire Gaza Strip, and annihilation of all fighting forces and their supporters.”

Citizens and public authorities around the world should attempt to have Feiglin arrested and prosecuted under the Genocide Convention for his statements, should he set foot in their territories.

His abominable plan comes as the death toll from Israel’s ongoing slaughter in Gaza reaches 1,752 people, including ten persons killed on Sunday morning when Israel once again bombed a United Nations-run school being used as a shelter, this time in the southern town of Rafah.

Feiglin, like his Knesset colleague Ayelet Shaked, has previously made genocidal statements, but these are perhaps his most specific and explicit.

Feiglin writes that the Israeli army must “designate certain open areas on the Sinai border, adjacent to the sea, in which the civilian population will be concentrated, far from the built-up areas that are used for launches and tunneling. In these areas, tent encampments will be established, until relevant emigration destinations are determined.”

“Tent encampments,” where the Palestinian civilian population would be “concentrated,” are simply concentration camps.

“The supply of electricity and water to the formerly populated areas will be disconnected,” he adds.

He then calls for the “formerly populated areas” to be “shelled with maximum fire power. The entire civilian and military infrastructure of Hamas, its means of communication and of logistics, will be destroyed entirely, down to their foundations.”

The Israeli army would then “exterminate nests of resistance, in the event that any should remain.”

Feiglin’s plan has clear genocidal intent in at least two respects: he denies that the Palestinian people exist and he defines Palestinians collectively as an enemy and target because of their religion:

“The strategic enemy is extremist Arab Islam in all its varieties, from Iran to Gaza, which seeks to annihilate Israel in its entirety.””