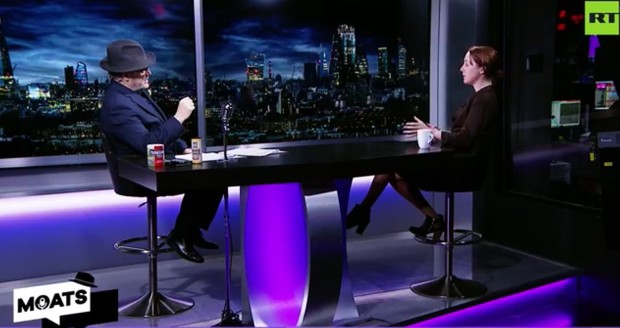 In London for a new round of Imperialism On Trial (February 25, info here), I was on George Galloway’s The Mother Of All Talkshows Sunday night to discuss Syria.

George gives an excellent introduction on the nature of systematic, paid-for, organized, deliberate, war propaganda on Syria, to deceive people and whitewash the nature of the heinous, criminal, actions of the terrorists dubbed by the west as “rebels” who have beheaded children, among other crimes.

He kindly points out that I and others who have been telling the truth on Syria are being vindicated on a daily basis.

During the interview, I noted the media portrayal of what is happening in Syria (incessant demonization of Syria and Russia), and that Syria has a legal right to fight terrorism, and an obligation to the Syrian people to do so.  END_OF_DOCUMENT_TOKEN_TO_BE_REPLACED

In December 2016, the Syrian Arab Army, Russia & allies liberated the northern Syrian city of Aleppo of the al-Qaeda and equally-heinous terrorists who had occupied and terrorized civilians in the city since 2012.

In the years subsequent, Aleppo to a large degree returned to peace, with rebuilding occurring in the hard-hit Old City, with displaced Syrians returning (contrary to the lies of UK Channel 4, among other war propagandizing media).

END_OF_DOCUMENT_TOKEN_TO_BE_REPLACED

Like Loading...
*Feature photo: Kindi hospital after terrorists truck bombed it (web photo)*
In November 2016, as corporate media continued to scream about hospitals in Syria, I travelled to Aleppo again. At Aleppo’s University Hospital I met Dr. Ibrahim Hadid, former Director of Al Kindi Hospital, the largest and best cancer treatment hospital in the Middle East. The hospital was destroyed by terrorists in December 2013 double truck bombing of Al-Kindi Hospital.

When speaking with Dr. Hadid, he stressed that he wanted medical colleagues and institutions to exert some of the concern they have for “hospitals” allegedly bombed in terrorist areas. They, and Western corporate media, have done the opposite, of course, largely ignoring the destruction of the top-notch Kindi hospital.
Kindi was not the only hospital targeted by terrorists. As I wrote previously:

“…Dr. Batikh said a private  hospital, Al-Rajaa, was hit by a mortar attack. “They cannot do  operations now, the operating room is out of service.”On Sept. 10, Dr. Antaki messaged me:“Yesterday, a rocket, sent by the  terrorists, hit a maternity hospital in Aleppo in Muhafazat Street. Two  persons working in the hospital were injured. No death. But the point is  that it is a hospital and it was hit by a rocket.”
END_OF_DOCUMENT_TOKEN_TO_BE_REPLACED

Twitter has been on a narrative-control rampage, removing or censoring legitimate accounts that are critical of US-led wars, propaganda and lies. Facebook and Instagram have increased their Big Brother policing, too.

Attempts by American-based social media behemoths to silence or censor voices critical of the establishment-approved narrative is nothing new, but this trend seems to have intensified lately.

Just in the past several days, following the criminal US assassination of Iranian General Qassem Soleimani, Instagram and Facebook have been removing posts supportive of Soleimani, even profile photos honouring the general, allegedly to comply with US sanctions, a truly absurd explanation for the narrative control.

On January 7, it was reported that Twitter had suspended numerous Venezuelan accounts, including those of the central bank, the Bolivarian National Armed Forces, public media, political leaders, the Finance & Oil ministries.

At the end of last year, Italy’s Rai News conducted an interview with Syrian President Bashar Assad, but then decided not to air it. Days later, as the interview was being aired instead by the Syrian Presidency, its respective Twitter account was inexplicably and suddenly restricted.
END_OF_DOCUMENT_TOKEN_TO_BE_REPLACED

Giving a sympathetic platform to a terrorist is reprehensible at best, downright criminal at worst, and definitely a bad look for a ‘respected’ media contributor. Oh, it’s for bashing Assad and the Russians? Go ahead, then.

A funny thing happened recently on Twitter. A journalist who contributes to the Guardian, Foreign Policy and the Atlantic tweeted—in a long thread peppered with photos of Abu Mohammed al-Jolani, the leader of an Al-Qaeda branch in Syria—about “the force that dominates” Idlib. 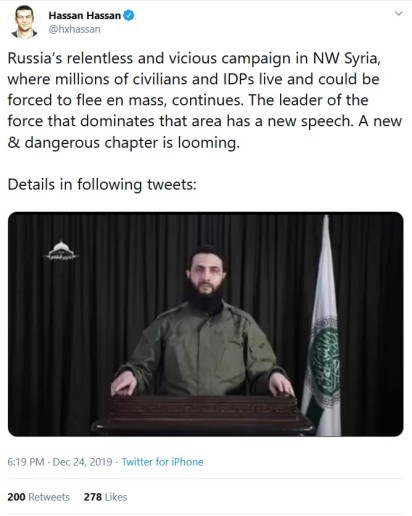 And no, its not just us Russian bots who say that Idlib is infested with Al-Qaeda: former US special envoy, Brett McGurk, deemed Idlib “the largest Al-Qaeda safe haven since 9/11.”

The thread smacked of giving a platform to terrorist propaganda. After extensively quoting Jolani, Hassan weighed in with his own thoughts on the situation in Syria and his Al-Qaeda “rebels”. END_OF_DOCUMENT_TOKEN_TO_BE_REPLACED 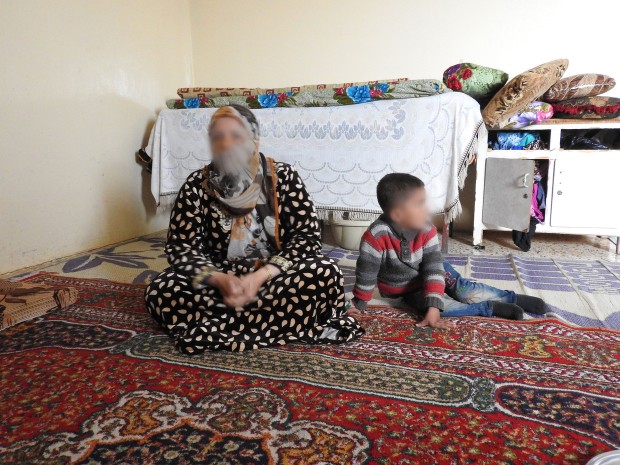 Western media and politicians are crying for Al-Qaeda in Syria again. It doesn’t get much more absurd than this!

After years of brutal occupation by terrorists from various groups and now overwhelmingly Hay’at Tahrir al-Sham (aka Al-Nusra, aka Al-Qaeda in Syria), Idlib governorate will eventually, by political or military means, be liberated. For now, military operations to liberate nearby northern Hama and southern Idlib villages are already under way.

Idlib, occupied by at least 70,000 terrorists, is the last remaining stronghold of Al-Qaeda in Syria – a fact emphasized by the US’ own former special envoy, Brett McGurk, who deemed the northwestern Syrian province the “largest Al-Qaeda safe-haven since 9/11.”

Yet, corporate media continue to deliberately overlook the presence of Al-Qaeda, instead writing of an Idlib that somehow, in the world of the Guardian, for example, is Al-Qaeda-free.

The liberation of Idlib, and also Hama, Latakia and Aleppo countrysides, will mean not only an end to terrorists’ incessant bombing of civilians, but also an end to the savage rule of terrorists – rule which in every prior instance around Syria has meant imprisonment, torture, and public executions of civilians by sword or point-blank assassination, starvation, rape of women, and even organ theft.

Last September, Syria and allies implemented a demilitarized zone and ceasefire around terrorist-occupied areas of Idlib and northern Hama.

Al-Qaeda in Syria unsurprisingly rejected any sort of truce, and continued pounding the civilians of Mhardeh and al-Suqaylabiyah in Hama, and elsewhere within striking range.

END_OF_DOCUMENT_TOKEN_TO_BE_REPLACED

Back home two nights ago after a series of flights and bus rides. Before I got on the last bus (on which I kept falling asleep as it was 4 am in Lebanon/Syria and my internal clock is still tuned into that time), an employee of the bus company asked if I was ‘that reporter who goes to Syria’, and when I replied with my name, he made a gesture of respect (hand on head) and thanked me. Turns out he is a Palestinian from Nazareth originally, living in Canada, and follows my efforts for Palestine and Syria, and had been trying to get in touch with me somehow.

I’ve commented before and will say it again: it’s encounters like these that make efforts worthwhile, and I’ve happily had many such encounters over the years, including two days ago while in Beirut airport. END_OF_DOCUMENT_TOKEN_TO_BE_REPLACED