*sifting through the remains of Mahmoud Abed Rabbo’s home, destroyed along with over 35 others by the Israeli army.

On a visit to Ezbet Abed Rabbo during which I heard more harrowing testimonies of life under invasion, children shot dead before parents’ eyes, and being held captive for days on end, I took more photos than I could testimonies.  Such is the widespread destruction in the eastern Jabaliya region that the testimonies will be spilling forth for weeks, if not longer.

Below are photos for which there wasn’t enough time that day to get the stories.  Many of them speak for themselves, and the general theme is one of being held captive in one’s house or a neighbour’s for 3-5 days in general –in miserable conditions, without food, water, medicine, toilets…–and either having family members shot or being terrorized as captives who when finally released tried to run away only to be sniped or accosted by further Israeli snipers and soldiers positioned in occupied houses and on the streets.

Of those who survived the ordeal, or had evacuated before the land invasion, many came back to partially or completely destroyed homes.  With no where else to live, some have erected tattered tents in the place of their houses, some are moving into refugee tents reminiscent of the 1948 expulsion of Palestinians from their homeland (the “Nakba”), when over 750,000 Palestinians were forced out of their homes, left to miserable conditions in refugee tents which have evolved into the densely inhabited refugee camps throughout Gaza and the West Bank (as well as those in Jordan, Lebanon and Syria).

While many buildings were evidently hit by missiles from F-16s, Apache helicopters, and the massive tanks occupying the area, others were leveled by bulldozers and by explosives, the remnants of which were littered in and around houses in the region.

My friend escorting me through the ravaged area pointed out of the Israeli invasion: “They make like are here,” of the houses.  Indeed, Dali and Escher seem to have created these houses whose angles defy proportionality, which seem to melt into the earth.

He also pointed out various destroyed houses belonging to Fatah members, including one with a toppled roof resembling icing dripping off of a cake: it belonged to a high-up Fatah intelligence officer.

Down the road, Mahmoud Abed Rabbo stood outside a home which had housed 38 people. He said it was the 4th attack by invading Israeli soldiers on his house in 3 years, though by far the worst.  He gestured to the A-frame which had been a normal 90 degree angle home, and said that his family had been home on Jan 7, when the Israeli military began heavy attacks on homes in the area.

“First, the Israeli army attacked around the house,” he said. “Then, the Israeli army attacked the home with 2 tank missiles.  The radio said the army had declared a ceasefire from 1-4 pm, so our neighbours [the family of Khaled Abed Rabbo] left their home, to flee. They were carrying a white flag but the Israeli soldiers shot at them anyway, killing 2 children (2 year old, 1 year old), and injuring another child and an older man.”

At 2 pm, Mahmoud explained, the Israeli army detonated some explosives next to the wall of the house, then entered through the hole they’d made.  His family was still inside.

He reported that the Israeli soldiers ordered his family to leave, to ‘go to Jabaliya and don’t turn back or we will kill you.’  Yet, he said they’d only gone about 200m down the road leading out of his area, arriving at the mosque, when they were stopped by more Israeli soldiers.  The army picked out the young men, ordering the women and children to continue walking. Sixty men were led to a shelter for animals, their IDs were taken, and they were ordered to take off their clothes.

Naked except for their underclothes, they were used by the Israeli army as human shields while the army went house to house, knocking and blasting holes in walls to use as doors.

Mahmoud said that around 10 pm, most of the young men were released, all but 10 of them.  Those 10 were abducted, believed to have been taken to Israel’s notorious Nakab prison.  The rest were ordered rest to walk to Jabaliya, not to turn back or they would be killed.

When ground strikes finished and Israel army left the areas they had occupied, Mahmoud Abed Rabbo’s family, like many of those from Ezbet Abed Rabbo, came back home to find it destroyed. 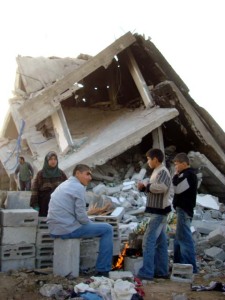 *Mahmoud Abed Rabbo and wife outside their destroyed home.

*explosive used to bring down a house. 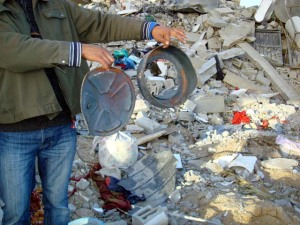 *spent explosive on the slanted floor of a former house. 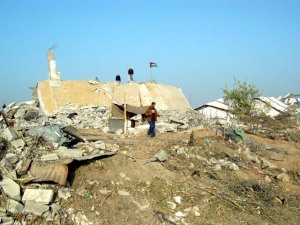 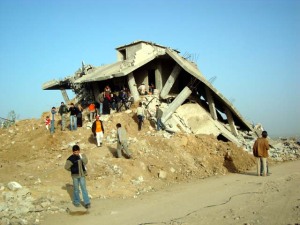 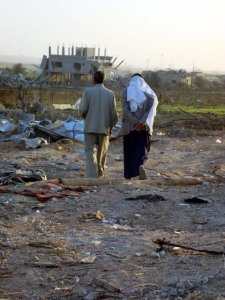 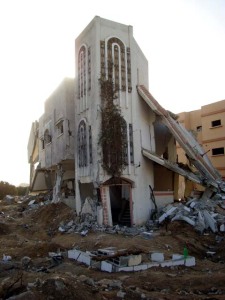 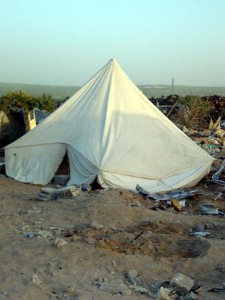 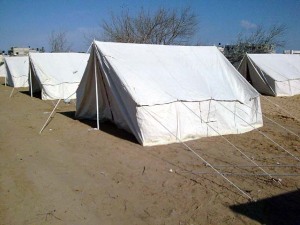 *one of many such tent camps erected to house the over 4,000 Palestinians displaced by Israel’s attacks on Gaza and destruction of their homes.

see: In Gaza, a ‘ranch’ turned to rubble

Trauma too hard to bear for Gaza

14 thoughts on “Ezbet Abed Rabbo: “They make like art here””