I wake in the early hours of the morning, as the rush of Eid begins: prayers call out from mosques around Gaza, Palestine.

In the living room of my friends’ home, the prayers surround me, like the carols and church bells did at Christmas as a child.

In fact, there are other parallels: the sound of children rising early, excited. Their squeals and the sounds of their play continues through the day, as it did with Christmases past. The same sense of reverence, anticipation, and for the children, glee.

Children get new clothes, and when adult relatives and friends see them, each child receives a shekel, which at the end of three days and visits from extended family adds up. 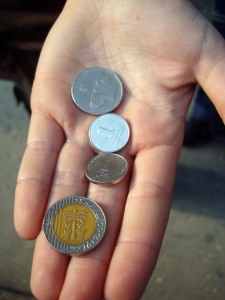 A friend explains, “some children save the shekels they are given, sometimes it can add up to 100 or 200 shekels, depending on how many relatives visit their home. They might buy something they need, like clothing or something they otherwise can’t get.

But many kids spend their money quickly, buy sweets from the shop, plastic guns, toy planes…Why? They from a young age know the different Israeli war planes, helicopters, tanks, gunfire; it’s their lives, their environment.”

Not all children enjoy ‘Eid these days, though. The overriding poverty in Gaza, thanks to the siege, the Israeli massacres, doesn’t allow many parents to treat their children to new clothes, shekels, sweets. For the vast majority, just providing adequate nutritious food is impossible.

“There was a small boy in Rafah crying, I don’t know why. We were going into my relative’s home, but I stopped and gave him a chocolate and he stopped crying, happy for the moment. ‘Eid is for children, they need to be happy.

It’s for young women too. They get money from their brothers, male relatives. Because our family is so large, we can’t each give them 50 shekels apiece, but my brothers and I pool together and give each 100 shekels.

‘Eid is beautiful, you know, but I don’t like it now, because I don’t have work, don’t have the money to give to my sisters, and I can’t bring gifts with me, though I’d like to. It’s too much pressure.

But aside from the money, it’s nice because we get to see our sisters and families that we don’t normally see, because we live further apart.”

The money pressures and the daily, ever-mounting stress of life in Gaza mean that many adults are relived when it’s over, some wish it didn’t come, despite their love of the religious side of ‘Eid.

But even aside from the money and general stress of living under siege and without basic freedoms for so long, other facts render ‘Eid joyless in Gaza: Gaza still hasn’t, and won’t in the near future, recovered nor rebuilt following the Israeli massacre; families long for their imprisoned sons and daughters, not seen for years; families are still living with very present reminders of invading Israeli soldiers’ graffiti, occupation of and damage to their houses, and of the brutal martyring of family members, by gunfire, phosphorous burns, crushing beneath destroyed houses, bleeding to death due to obstructed medical access…

And as my friend recaps what I’ve been thinking, “Adults, we’re not so happy. Children don’t have to think about the latest martyrs, or the siege, of the fact that there’s no money to give out to,” I get a phone call from Ahmed, a Red Crescent medic and civil defence worker.

“The Israelis shelled east of Beit Lahia this morning. I’ve been awake since 5:30. There are four wounded, two of them critically,” he says.

The news later spouts an Israeli spokeswoman saying the strike is a result of home-rockets being fired from the area hours earlier.

Ahmed says the men are civilians, were walking on friend’s land 1 km from the border when tanks along the border targeted them.