Gaza, a city so rich in trees as to be like a cloth of brocade spread out on the sand.

The other night I was flipping through Mahfouz’s Palestine: A Guide, by Mariam Shahin. In my browsing, I came across two different references to Gaza’s former fertility, so lavish that I had to note them, as one would today believe these were lies.

Beit Lahiya (in Roman times): Then its sweet water nourished delicious fruits and beautiful gardens. It once looked like a forest, with many apple, fig, peach and orange trees.

I try to imagine the flourish of green with flowering buds… but can’t.

There are trees in Gaza, sparsely pitched and stunted by water shortages or re-planting after Israeli bulldozing.

But since I first came here in November 2008, every time I’ve gone to border regions, I’ve been told by proud locals: this was the most beautiful area of Gaza, people used to come from all over with picnics, to enjoy the trees, the birds, the flowers…

Beit Hanoun and Faraheen locals rival with their memories, and surely all along the Green-Line border separating Gaza and Israel there were such bounties of green.

I photographed Wadi Salqa in late 2009, after much of its farm homes and crops had been destroyed, bulldozed, churned into useless, difficult to plow land. 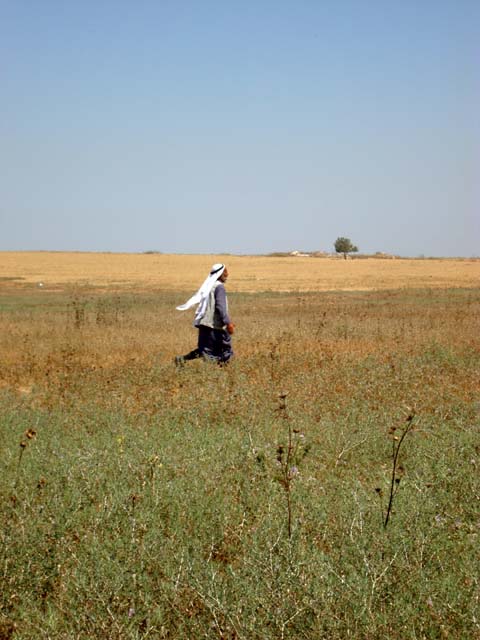 *Abu Ahmed walks through Beit Hanoun farmland which once flourished with a variety of trees (looking for his dead son, left 54 days in the border region because no one could retrieve the body)

*a roughly 15 metre wide track clawed into the land by Israeli military bulldozers and tanks. Photographed in May 2010, while accompanying farmers onto their near-barren land.

*local Palestinians pray during demonstration against lethal Israeli imposition of a “buffer zone” and continual destruction of water sources and Palestinian farmland.

What threat did I pose the Israeli soldiers?

popular resistance lives on in Gaza

Homes and livelihoods gone in an instant

how Israeli policies and attacks have ravaged Gaza’s agricultural sector

where is the buffer zone?

The Israeli shooting left me paralyzed

still bleeding after all these days

Lost in the Buffer Zone

some days you get shot at

rising casualties in the buffer zone

the third hit her in the kneecap

8 thoughts on “so rich in trees”