Radia Abu Sbaih, 47, lives with her sister and one niece on family land roughly 700 meters from the “green line” boundary between Gaza and the rest of occupied Palestine. Until 18 February 2010, they had nearly 600 olive, fruit, date and nut trees, an agricultural cistern, a water well, various vegetables and a house.

“We were in our home when we heard the Israeli tanks and bulldozers approaching. We ran off immediately,” says Sbaih.

She walks over felled trees, past the bulldozed cistern, and to the ruins of their home.

“It’s all destroyed. Look, our clothes are buried,” she shouts, pulling at a sweater caught beneath the concrete block pile.

Household belongings are strewn on top of and beneath the pyramid of rubble. A gas range, several cooking pots, a plastic water bottle filled with olives, another with olive oil — both from their land and their destroyed olive trees — denote where the kitchen once stood.

“We were self-sufficient. Twenty people lived off this land. We had our own water source and we grew all our own vegetables: onions, spinach, carrots, cucumbers, tomatoes, potatoes, radishes, beans …” Nothing, save a stray sprig of green onion, remains.

Beyond the lean-to sun shade, a donkey stands next to the crushed remnants of his cart.

“Now we have no electricity, no shelter, no water. I walk one hour both ways every day to bring jugs of water for drinking,” says Sbaih.

But for her, it is the loss of their trees that hits the hardest. In the hour or less it took the bulldozers to raze all their property and possessions, Radia Sbaih’s trees were cut to the ground and plowed into the valley. Haggard limbs studding the earth and thick ground-level stumps are all the evidence of the 10 dunams (a dunam is the equivalent of 1,000 square meters) of formerly thick growth.

“This was our life, we grew up here, we put our sweat, love and everything we had into the land,” she says. “We watched the trees mature and cared for them as though they were family.”

Sbaih’s niece feeds trampled olive branches to kindle a smoky fire for tea. An Israeli warplane thunders over and Sbaih comments, “It’s normal, they’re always over us.” The roar is accompanied by the continual whine of Israeli “drones” (unmanned aerial vehicles) patrolling the skies.

“We actually didn’t have any problems during the war,” Sbaih says, recalling the winter 2008-2009 Israeli massacres on Gaza. “But now we are destroyed. If it rains, where will we go? We have no shelter, not even a tent.”

As the tea boils, the rain starts to fall. 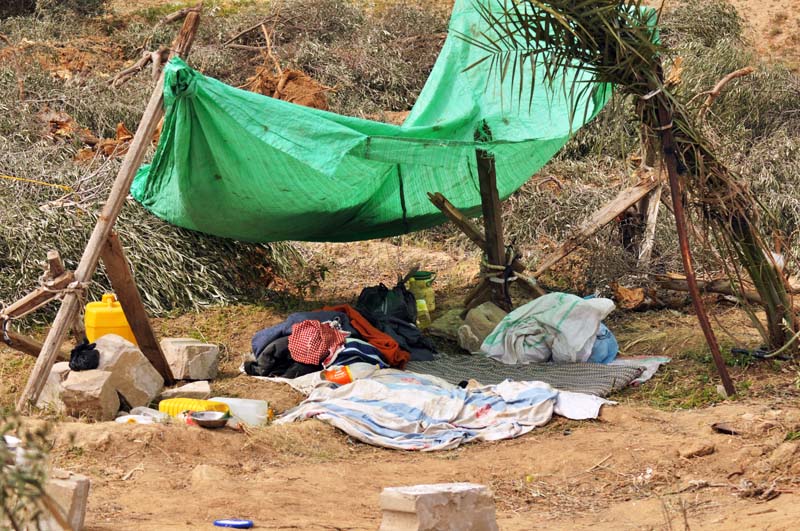 Sbaih’s words and losses are echoed by the two other families half a kilometer south.

Moin Abu Said, 32, stands beside the fresh ruins of his home roughly 600 meters from the border. His father Ali, 63, sprawls on a blanket spread nearby on churned earth.

“I’ve got three children. When the bulldozers and tanks came, I was taking my son Nassim to school, around 7:30am. I heard the noise of the invasion even from the school.”

Abu Said returned to find the house that he had worked eight years to build completely flattened.

“We only lived in it one month,” he says in disbelief.

He points out the wreckage of a chicken barn, home to 1,000 chickens, the stubs of olive, date and lemon trees.

Like most in the border region, this is not the first time Abu Said’s land has been razed.

“Ten years ago they bulldozed everything, but we replanted. Now it’s all gone again.”

Aouni Abu Said, Moin’s brother, still has a home. Shot-up by Israeli machine-gun fire, the nearby one-level house somehow escaped the bulldozers. But his family was caught in the attack, terrified.

“My wife and kids were in kitchen when the Israelis began shooting at our house,” he says, pointing out the lattice of bullet holes in the kitchen windows and walls, children’s bedroom and nursery.

“The area was filled with Israeli tanks, bulldozers and soldiers from morning till around 4:30pm,” he says.

Closer to the border fence, but still 450 meters away, Abdel Hai Abu Said, 40, his wife and their six children sit with his father near the A-frame wreckage of their two-story home.

Five dunams of olive and date trees were mowed, along with 150 pigeons and a donkey.

“[The donkey] was in a concrete shelter when the bulldozers attacked,” he explains, pointing out the carcass in the treeless field. 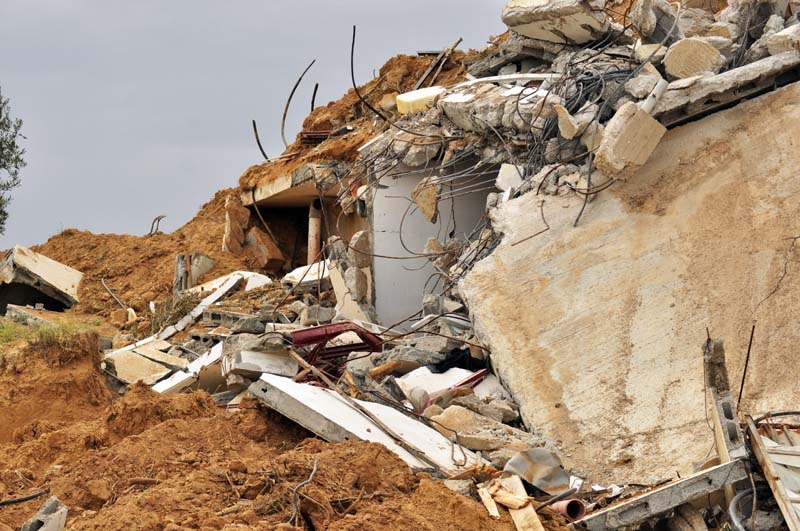 One room of the house remains partially intact, ceiling corners sloped at 45 degree angles and walls punctured by bullet holes and cracks. The cramped, dust- and rubble-filled room serves as their shelter at night, despite the dangling clumps of concrete and the threat that the house might completely collapse.

A plastic bag keeps the surviving items of clothing protected, another the pieces of bread.

“We lived in this house for 11 years,” Said says. “Upstairs there were three bedrooms for my wife and our children. My father and aunt slept downstairs.”

Salem Abu Said, Abdel Hai’s father, was born 1943 in Beersheba, before the 1948 ethnic cleansing of historic Palestine by the nascent Israeli military.

“First I was expelled from my land, and now our house is destroyed. Once again, I have to start all over.”

All the families report that the area was calm, without regular Israeli invasions, at the time of the invasion. They had a false sense of security and worked the land, lived off of it and planned their futures. In half a day this was all destroyed.

8 thoughts on “Homes and livelihoods destroyed by Israeli bulldozers”