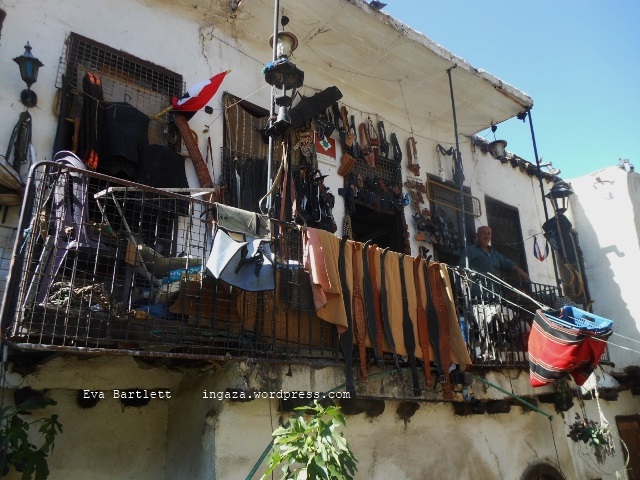 I’ll continue to update this, but for the moment, here are a variety of discussions with Syrians and peace & justice delegates in Syria:

Conversation with a restaurant owner in Bab Sharqi (East Gate), Old City Damascus, and several of his friends, their experiences with mortars being fired on the city. Mortar fire during our conversation. Apr 27, 2014
****


chat with co-creater of Damascus wall mural, Apr 21, 2014
****
chat with Damascus teens, Apr 21, 2014
****
talk with Syrian journalist, April 2014
****
discussion with two Americans (one half-Syrian) who have lived in Syria for 22 years
****
shop owner on decline in business, Apr 18, 2014
****
chat with popcorn vendor, plaza opposite Umayyad mosque, Apr 18, 2014
****
discussion with Syrian Brazilian in Damascus, Apr 17, 2014
****
Syria shop owner near Bab Sharqi (East Gate) in Damascus, Apr 17, 2014
****
brief talk with Syrian Armenian, Damascus, Apr 15, 2014
****
On the morning of April 15,  “rebels” in the Jobar district shelled a Damascus elementary school, killing one child and injuring at least 62 more, some of whom are critically-injured, some of whom lost limbs.  A second school–a kindergarten–was also shelled the same morning, in the same densely-inhabited Christian area of Damascus, injuring 3 more children.
****
Mother Agnes Mariam on shelling of elementary school and the the “rebels” attacks on civilians.
****
British Anglican minister, Andrew Ashdown, talks about Syria and building links with Syrians, giving them platforms to be heard, Apr 14, 2014
****
kids at Umayyad mosque, Damascus, Apr 14, 2014
****

Andrew Ashdown and Mairead Maguine on the attacks on Maaloula and other heritage sites, Apr 12, 2014
****

11 thoughts on “discussions on Syria, with Syrians and non-Syrians (IN Syria)”

Eva Bartlett is an independent writer and rights activist with extensive experience in Syria and in the Gaza Strip, where she lived a cumulative three years (from late 2008 to early 2013). She documented the 2008/9 and 2012 Israeli war crimes and attacks on Gaza while riding in ambulances and reporting from hospitals. In 2017, she was short-listed for the prestigious Martha Gellhorn Prize for Journalism. The award rightly was given to the amazing journalist, the late Robert Parry [see his work on Consortium News]. In March 2017, she was awarded “International Journalism Award for International Reporting” granted by the Mexican Journalists’ Press Club (founded in 1951). Co-recipients included: John Pilger and political analyst Thierry Meyssan. She was also the first recipient of the Serena Shim award, an honour shared with many excellent journalists since. https://serenashimaward.org/laureates/ Since April 2014, she has visited Syria 15 times, the last times being from March to late September, 2020 and during the presidential elections in May 2021. All of her writings and videos on which can be found here: https://ingaza.wordpress.com/syria/syria-my-published-articles-from-and-on-syria-2014-2021/ and here: https://www.youtube.com/playlist?list=PLqtiZC-4QZC3skdIAvOxsXwZm0jeM-mz6 A more detailed account of her activism and writings can be found here: https://ingaza.wordpress.com/about-me/ Her social media sites: https://linktr.ee/evakarenebartlett