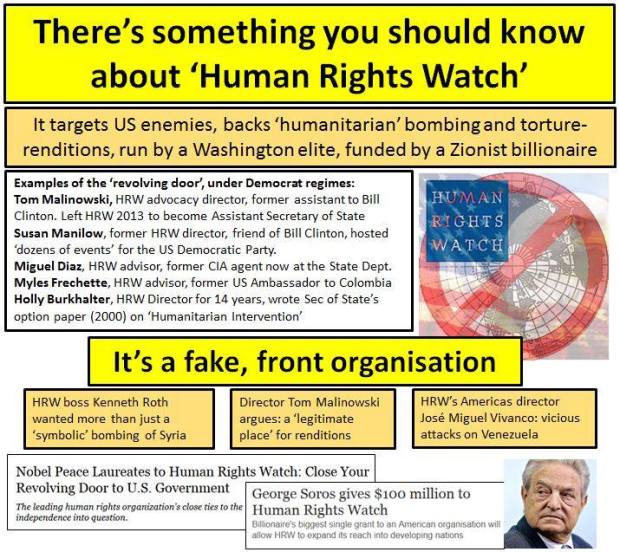 (no, they haven’t *forgotten* Libya, they were instrumental in engineering the death and destruction in Libya, as they are doing in Syria)

“A massive campaign in support of foreign intervention against Syria is underway. The goal is to prepare the public for a “No Fly Zone” enforced by US and other military powers. This is how the invasion of Iraq began. This is how the public was prepared for the US/NATO air attack on Libya.

The results of western ‘regime change’ in Iraq and Libya have been disastrous. Both actions have dramatically reduced the security, health, education and living standards of the populations, created anarchy and mayhem, and resulted in the explosion of sectarianism and violence in the region. Now the Western/NATO/Israeli and Gulf powers, supported by major intervention-inclined humanitarian organizations, want to do the same in Syria. Is this positive or a repeat of past disasters?

Who are the Humanitarian Interventionists?

Major non-governmental organizations (NGOs) in the campaign include Avaaz, Physicians for Human Rights (PHR), “White Helmets” also known as “Syria Civil Defence, “The Syria Campaign” , Amnesty International etc.. These campaigns are well funded and in accord with the efforts of John McCain, Turkey, Saudi Arabia and others who are explicit in wanting “regime change” in Syria. Turkey continues to press for the No Fly Zone as the US and Turkey launch another round of training “moderate rebels” at bases in Turkey.

Today March 30, 2015 Avaaz is ramping up its campaign trying to reach 1 million people signing a petition for a “Save Zone” in Syria.

Avaaz organizer John Tye explained the rationale for the Syria No Fly Zone petition in a lengthy letter. He argues that a No Fly Zone (NFZ) will “save lives” and help “stop the carnage”. In sharp contrast, here is what General Carter Ham, the head of AFRICOM when the ‘no-fly zone’ over Libya was enforced, said on “Face the Nation”

“I worry sometimes that, when people say “impose a no-fly zone,” there is this almost antiseptic view that this is an easily accomplished military task. It’s extraordinarily difficult. Having overseen imposing a no-fly zone in Libya, a force that is vastly inferior in air forces and air defenses to that which exists in Syria, it’s a pretty high-risk operation… It first entails killing a lot of people and destroying the Syrian air defenses and those people who are manning those systems. And then it entails destroying the Syrian air force, preferably on the ground, in the air if necessary. This is a violent combat action that results in lots of casualties and increased risk to our own personnel.”

Recent History of No Fly Zone

The most recent No Fly Zone was that imposed on Libya in March 2011. It was authorized by the UN Security Council after a wave of media reports claiming that Libya was using mercenaries, Libyan troops were engaging in widespread violence and Viagra fueled rape, and finally that the city of Benghazi (population 700,000) were facing massacre and possible ‘genocide’.

Alarming press reports were issued by Amnesty, Human Rights Watch, Physicians for Human Rights, etc.. Avaaz launched an online “Libya No-Fly Zone” petition. These groups rallied public opinion which contributed to the UN Security Council resolution granting USA and NATO right to take over Libyan airspace. That led to a bombing campaign of nearly 10,000 attack sorties over the next eight months, the murder of Qaddafi, deaths of about 30 thousand, downfall of the government and installation of the outside appointed National Transition Council.

Since then there has been an explosion of violence, racism, sectarianism, and chaos. Libyans have experienced a huge decline in security and standards of living. The No Fly Zone which was supposed to “prevent a massacre” has led to vastly greater violence and chaos in Libya and beyond. Fighters and weapons flooded from Libya to Turkey and into Syria, expenses paid by Qatar.

As for the early reports about mercenaries, rape, viagra and looming massacre ….. these have been exposed as false. The mercenaries were fighting on the side of the “rebels”. The massacres were those that followed the NATO destruction. The entire “viagra” story was a fraud.

The details are documented in Slouching Towards Sirte: NATO’s War on Libya and Africa by Maximillian Forte and Global NATO and the Catastrophic Failure in Libya by Horace Campbell. Forte devotes one entire chapter to detailing the false manipulation of public opinion by would-be humanitarian organizations.

Despite writing the long letter in response to specific questions including Libya, Avaaz organizer John Tye avoids any reference to their “Libya No Fly Zone” campaign and the aftermath. This is perhaps understandable but raises questions about sincerity and motivation. Are many members of the public being unwittingly duped into joining the campaign?

Part 2 of this article will examine: What is the evidence of war crimes in Syria? Are the humanitarian interventionists R2P (right to protect) or R4W (responsible for war)?”

–SYRIA: Avaaz, Purpose & the Art of Selling Hate for Empire

–Imperialist Pimps of Militarism, Protectors of the Oligarchy, Trusted Facilitators of War | Part II, Section I

–Avaaz: the World’s Most Powerful NGO

–How Avaaz Is Sponsoring Fake War Propaganda From Syria