The momentous Syrian-Russian liberation of world heritage site Palmyra on March 27, 2016, came and went with zero congratulations from world leaders who are supposedly fighting terrorism. Palmyra is an area that was subject to ten months of Da’esh (ISIS) occupation, slaughters, and destruction.

On May 5, the ancient site was newsworthy once again. Just over a month after its liberation by the Syrian Arab Army (SAA) backed by the Russian Air Force, Palmyra’s Roman Amphitheatre was host to a concert of exceptional musicality and tremendous significance for both Syria and Russia.

“According to Syrian Culture Minister Issam Khalil, the concert of the Russian world-renowned Mariinsky Theatre Symphony Orchestra in the Syrian city of Palmyra is dedicated to the upcoming Victory Day.”

Sputnik cited Russia’s President Vladimir Putin, who addressed the audience and musicians by video link, saying of the concert:

“I consider it as an expression of gratitude, memory and hope. The gratitude to everyone, who fights against terrorism without sparing their own lives. The memory of all the victims of terror regardless of the place and time when crimes against humanity have been committed.” 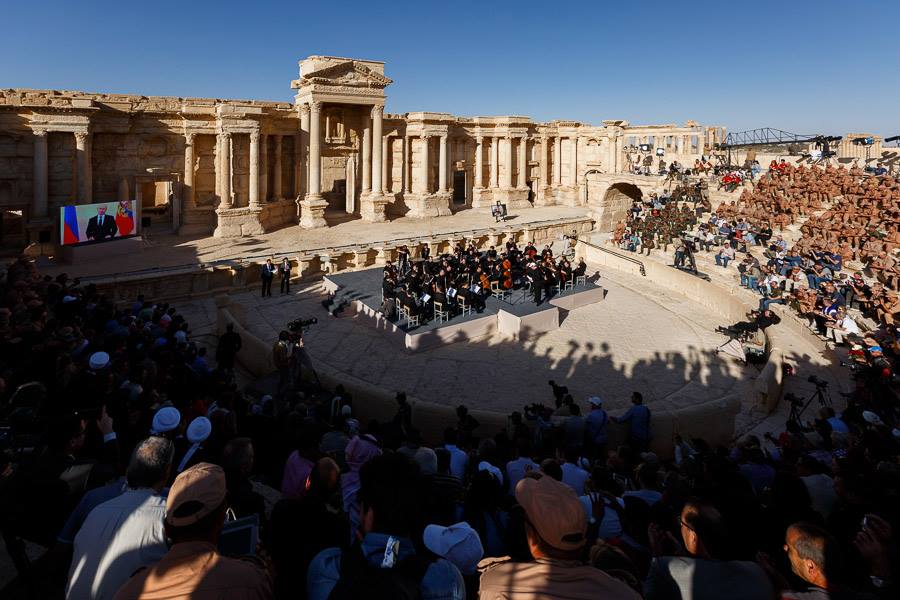 “The music you will hear today, you hear our pain and our memory. But there’s also great hope in this music.  It’s very difficult to speak about emotions we feel, we musicians. We protest against barbarians who destroyed wonderful monuments of world’s culture. We protest against the executions of people, here on this great, great stage. Our concert in Palmyra is our appeal for everyone to come to peace and unity, and all people in the world to unite and work against this evil, against the terrorism.”

Titled “Praying for Palmyra-Music Revives Ancient Ruins”, it included the works of Russian composers Sergey Prokofiev and Rodion Shchedrin, and began with Johann Sebastian Bach’s solo violin masterpiece, “Chaconne in D minor”, played by renowned Russian violinist, Pavel Milyukov. On the Chaconne, Gergiev said: “This piece is expressing greatness of human spirit, and I think it is appropriate to play today here.” (The full concert without commentary can be watched at here )

A second concert, “Gate of the Sun,” was held in Palmyra the following day, on Martyrs’ Day. Majestic theatre columns lit in the evening darkness, the event ran for over two hours, featuring: Syria’s National Ensemble for Arabic Music, The Syrian National Symphony, The Chamber Choir of the Higher Institute for Music, The Mary Orchestra, and The Joy Choir (excerpts here).

In addition to Syrian civilians and journalists in attendance, according to SANA news, “The event was attended by families of martyrs from Palmyra and other areas in Syria,” and began “with an ode to martyrs.”

Amid a sea of fluttering Syrian flags, journalist Alaa Ebrahim—who had reported from  the frontlines when the Syrian army liberated Palmyra—reported during this concert.

“Last year, ISIL executed 25 Syrian soldiers here in Palmyra, in central Syria. A year later, the Syrian government regained control of the city. Now they’re holding a concert, a performance, on the same stage where the soldiers were executed. Back then, the soldiers were executed by teenagers from the radical group. Today, the Syrian government has brought a band of children and teenagers to perform on the same stage.”

Since Palmyra’s liberation, Syrian soldiers and Russian deminers have worked steadily to clear the area of the thousands of landmines and other explosives laid by Da’esh.

Even so, it is impressive that at a time when Syria and its allies continue to fight the terrorism wreaked upon Syria by the NATO-Turkish-Gulf-Zionist alliance, such a concert, featuring world-famous musicians, could occur.

SANA News explained the significance of Matryrs’ Day in Syria.

“More than a century has passed since the execution of Syrian nationalists and intellectuals at al-Marjeh Square in Damascus by the Ottoman’s ruler Jamal Basha, who was known as al-Saffah (the blood shedder), on May 6th, 1916.

…On this day, the Syrian people salute those who sacrificed their souls for the sake of protecting their homeland and the Syrian army soldiers who are fighting in the battlefields.”

Asser Khattab , a journalist at the Middle East Channel (MEC), attended the May 6 concert and offered his view on its significance.

“Yesterday’s event was held in order to honor the souls of all martyrs on the very crime scene that IS used. It carries a clear message that we will never capitulate… never give in. IS terrorists displayed their ideology on the amphitheatre and we displayed ours, as we did before. It’s now crystal-clear whose ideology is stronger.”

On 18th August the US aid recipients beheaded the eighty one year old Dr Al Assad, for his refusal to reveal where many precious artifacts had been hidden according to his son, who was kidnapped with him but released. The body was hung from one of the great Graeco-Roman columns, his head placed between his feet.”

Also honoured in the events was the 25 year old Russian Special Forces Officer, Aleksandr Prokhorenko, who prior to the liberation of Palmyra was “killed near the town of Palmyra while guiding Russian warplanes to IS targets,” Russia Today reported. “The officer died a hero, calling a strike on himself after he was compromised and surrounded by terrorists.”

The main prominent English language media covering the May 5 concert were Russia Today and Sputnik News—that is, the main media doing so fairly and paying the event, and what it signified, the respect it merited.

Most of the western corporate media heavyweights used the occasion to sling anti-Russian vitriol, as well as the expected anti-Syria accusations. Above all, they belligerently refused to acknowledge Syrians’ gratitude and joy at the liberation of Palmyra (much less join journalists who traveled to Palmyra immediately following its liberation), nor the significance of the Russian musicians’ concert.

Surprisingly, an article in the UK’s Telegraph did justice to the event, with very little of the rhetoric found in the Guardian, BBC, NY Times, Reuters and elsewhere. The Telegraph article also highlighted the significance of the event’s date for Russia, citing President Putin’s address and further adding:

“The concert was carefully coordinated with Russia’s annual Victory Day celebrations, the annual holiday on May 9 that marks the end of the Second World War but has also become a celebration of modern Russian military prowess.”

Yet, two days later, seemingly to make up for having covered the event decently, the Telegraph published another article. The original title, “Palmyra Concert Like Nero Fiddling as Rome Burned,” has since been changed, appropriately-so, as the article did not actually address the concert until the last 4 paragraphs. The preceding paragraphs are tastelessly filled with rhetoric and unsubstantiated accusations, including citing the foreign-created, al-Nusra supporting “White Helmets” and the discredited MSF operating in al-Nusra and related terrorists areas.

To understand more on why neither the White Helmets nor MSF claims should ever be taken seriously, see: “‘White Helmets’ Exposed and Petition to Prevent their Nomination for Nobel Peace Prize” (link) and “About Bias and Propaganda on Syria  Open Letter to MSF/Doctors without Borders” (link).

But how did Syrians feel about the concert itself and the liberation of Palmyra weeks prior?

Syrians in Syria and abroad replied to my question. Some of their many replies follow.

“The return of life and civilization to the ancient city after it had been turned into a theatre of beheadings and terrorism last year.” – Hadi Makhlouf , Social Media Manager at MEC

“It’s the sign of the great victory. With this act we have shown them that they cannot take us down.” -Samer Hussein, lawyer.

“That civilization will prevail and barbarians will be defeated.” -Zeinab Salah, writer

“For me, as a Syrian, it reflects what the core conflict is really about. Seeing the contrast between the scene of ISIS thugs executing Syrians in the amphitheatre with spectators including children forced to watch, and the scene of the playing music, expressing the true tendency of the civilized Syrian people.” -Iyad Khuder, journalist at MEC, Damascus

“Palmyra is finally back. No color of black anymore. I saw the angels of martyrs of Beloved Syria; beautiful faces of mothers, children and soldiers flying there protecting us. It was mixture of happiness and sadness. I was so proud that the rainbow has come back to Palmyra but I couldn’t forget our losses. I hope the rainbow will cover all of Syria.” -Emy Abbas, translator

“Resilience, Victory, and Will. That Truth prevails.” -Lulwa Kasawat, architect

“Yesterday’s festival was a message to whom it may concern that our struggle in Syria is not only about geopolitics and war over energy, it is also a clash of civilisation between the forces who uphold Humanitarian values and those who want to return Syria to the stone ages.” -Kevork Almassian, political analyst, researcher, and writer

“Part of the war of terror on Syria has been the annihilation and theft of our heritage by Da’esh terrorists and their supporters. But after all of the slaughtering and destruction by Da’esh in Palmyra, the Syrian Arab Army and allies have destroyed the abomination that was terrorism here.

Today’s celebration was a great sense of pride and of gratitude to those who made this day possible. The victory of Palmyra increased my faith that Syria will not be defeated, and in the immortality of people defending their land, sovereignty, culture and history. We celebrated the birth of a new victory.” –Rasha Mahfoud, journalist

“I am a Syrian living abroad. Keeping in mind that only few months ago western-backed terrorists were killing people on the same stage, yesterday’s concert symbolized rebirth of a country and a civilized nation. I am from Aleppo and I am looking forward to the day when similar soul-liberating concert will take place at Aleppo’s ancient Citadel.” -Mary Merdkhanian, USA

Syrian voices on the events at Palmyra speak a depth and truth that no western corporate media or leader would ever acknowledge. Perhaps fitting to conclude with is linking to this clip taken by Syrian Reme Sakr at Palmyra on May 6, honouring the martyred and showing the love and resilience of Syrians celebrating their country.

The clip is introduced with Sakr’s solemn message: “For those who were taken on this very stage. #Palmyra #Tadmur.”