Robert Inlakesh is a Documentary Filmmaker, Journalist, and Middle-East  Analyst

I recently spoke with him on his visits to Occupied Palestine and in  particular his two-part documentary, “Steal Of The Century’: Trump’s  Palestine-Israel Catastrophe” , the first part of which he released on  June 5.

*I’m sure the title in Russian flowed better. I did amend it slightly to note and highlight that I was NOT attacked by a Russian, but likely an American/israeli.

Vadim Manukyan interviewed me regarding an incident that happened last Saturday.

**Please note: everyone I’ve met in Moscow, in Russia generally, has been *extremely* kind and helpful. The person who abused me had likely an American accent and Zionist motivations. I’m mainly posting this to both show ugly Zionism. This incident has delayed me a little in finishing off two important projects, but only due to the incident itself and taking the time to file a complaint with police**
Vadim Manukyan writes:

“Canadian journalist and blogger Eva Karene Bartlett came to Russia for tourism, journalism, including on the Moscow protests, and also to visit Crimea and Donbass.
It was she who owned the famous phrase about Moscow ‘opposition’:

‘These are the most apathetic of all the protesters in the world that I have seen.”

[*Note: My emphasis on apathy was NOT any call to violence, it was noting the lack of interest protesters displayed, compared to passionate and vibrant protests I’ve witnessed elsewhere, like Caracas for example.]

END_OF_DOCUMENT_TOKEN_TO_BE_REPLACED

Recently, Global Research TV had me on to discuss Syria, Palestine, and MSM lies.

END_OF_DOCUMENT_TOKEN_TO_BE_REPLACED

On Al Quds Day in Toronto, Canadians from many faiths and backgrounds came out in solidarity with Palestinians who have been and continue to be brutally oppressed by Israel. Notably, in recent months elite Israeli army snipers have gunned down unarmed Palestinian protesters, including medics, photographers, children.

Corporate media describes these as ‘clashes’ and thrusts blame on Palestinians, who are protesting for their basic human rights.

See my: Israeli violence against Palestinians will never end as a result of UN & US hypocrisy

The pro-Zionist channel, The Rebel, issued a distorted report on the peaceful Toronto protest, a protest which included numerous informative speeches–speeches not included in The Rebel’s report.

This video is my correction to some of the most egregious statements and lies of The Rebel’s report.

END_OF_DOCUMENT_TOKEN_TO_BE_REPLACED

My speech at the al Quds Day demonstration yesterday.

Delegate Feroze Mithiborwala at the conference.

Beirut, Eva Bartlett:
As the Zionist state increasingly and openly reveals its criminal, genocidal nature, more and more citizens from around the world are waking up and standing in solidarity with the Palestinian struggle for justice. Activists, academics, journalists, unions and ordinary people are confronting the lies of Zionist propaganda, rendering the Zionist narrative weak and its genocidal, colonial agenda opaque.

Rather than leaving the issues of justice, the return of Palestinian refugees, the release of Palestinian Political Prisoners from Zionist jails, the Palestinian just struggle for sovereignty, and ending the siege on the Palestinians of Gaza to institutions and governments, Palestinians and supporters take matters into their own hands, among other actions organizing conferences to share strategies and successes and build networks.

Over 80 delegates from around the world attended the Second “Global Convention of Solidarity With Palestine” in Beirut for two days of discussions (December 1-3), including delegates from Palestine, Lebanon, Egypt, Jordan, Senegal, Indonesia, Malaysia, India, Pakistan, Chile, Argentina, Venezuela, North America, Britain, Europe, Russia, Iran, among other nations. Notably, delegates from Gaza under siege and other areas of occupied Palestine were unable to make it to the conference due to the Zionist, and sadly the Egyptian, control of border crossings.

Special focus was put on the Zionists’ summer massacre of Gaza and on the ongoing assaults on Palestinians in al-Quds (Jerusalem) and the openly-admitted intent to Judaize Jerusalem and all of occupied Palestine. 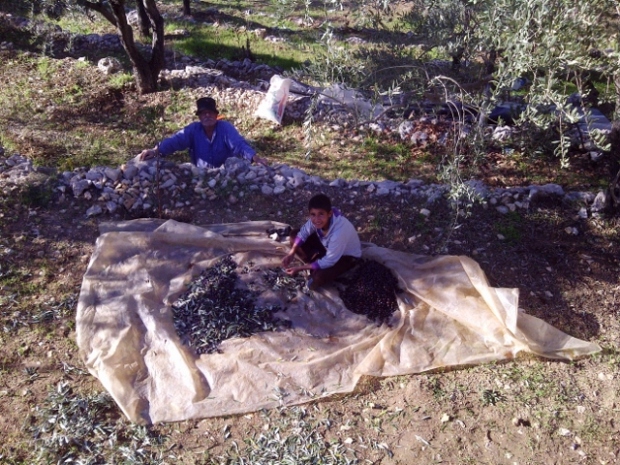 Walking in rural Lebanon the other day I came across numerous families harvesting their olives in the same fashion you see in Palestine: tarp spread out, tree limbs shaken olives tumbling down, break for lunch in the shade of the olive tree, laughter, some singing….

But in Palestine, foreign colonists attack Palestinian harvesters…with the cover of the Zio army.

A simple, age-old act is rendered impossible or deadly.

**Dr. Bashar al-Jaafari has for years been speaking the truth of Syria’s fight against the zionist-nato-turkey-gulf terrorist coalition.

Note: Dr. Bashar al-Jaafari, hence Syria, re-affirms “the right of the Palestinian people to self-determination, and building an independent state from it’s whole territory with Jerusalem as its capital, the right of refugees to return to their lands, their homes (as per ’48 resolution 194). This is a NON NEGOTIABLE right, this is a right that will never disappear… Syria condemns the ‘israeli’ violence against the Palestinian people in the Gaza Strip. This is a yet another new chapter in the overall plot, the overall aggression against the Palestinian people. ‘israel’s’ continuation of such acts of aggression has exacerbated tension in the region. They have reached an unprecedented level, one which will have very heavy consequences which of course will not be limited to the region alone.”

Dr. al-Jaafari noted the training camps for terrorists, who are sent across Syrian borders…violations of the Council… “the very same states which back terrorism in my country are also working to protect ‘israel’ …covering up its crimes…The United States has not just used the right of veto 61 times to protect ‘israel’ and to prolong its occupation of our territories which suffer under its occupation… no, the United States have even disregarded Security Council resolutions  in the past, to forge illegal alliances, targeting the sovereignty of a great many members states of this organization … illegitimate alliances forged by the united states and the united kingdom outside the confines of the council, have resulted in nothing more than violence, destruction, anarchy and terrorism throughout the world…”
END_OF_DOCUMENT_TOKEN_TO_BE_REPLACED

“A young Palestinian girl who was struck by an Israeli settler vehicle earlier Sunday has succumbed to her wounds, medics told Ma’an.

Einas Khalil, five, died after being hit by a car driven by an Israeli settler near the central West Bank town of Sinjil, medical sources at Palestine Medical Complex in Ramallah said.

The girl and young Nilin Asfour were walking on the main road near the village when they were hit, and were taken to the hospital in Ramallah where their wounds were described as serious.

“Palestinians in the Occupied West Bank have been in support of their fellow brothers and sisters in Gaza throughout the so-called “Operation Protective Edge”. This was demonstrated through their strings of pro-Gaza rallies since Israel began its assault on Gaza.

However, the western media continues to fail to recognize the collective oppression of Palestinians by Israel. This neglect was exemplified during the recent war on Gaza, in which the mainstream media neglected to report what was happening to the Palestinians in the West Bank who were also suffering under Israeli aggression.

A report released by the “Palestine Liberation Organization Negotiations Affairs Department” revealed that during the Gaza war period, in the West Bank 32 Palestinians were reportedly killed, 1,397 Palestinians injured and plans to move up to 6,000 new Israeli settlers were deviously devised.

On this edition of The Sun Will Rise, we discuss Israel’s multi-pronged systematic oppression of Palestinians and western media’s failure to report on it.”