Israel continues with a campaign of targeting mosques, places of worship, which are embedded in towns and densely-packed camps, in addition to strikes on other civilian infrastructure. The al-Burno Mosque [photos] across from Shifa hospital was bombed late on the 1st night, completely leveling it. Three were targeted in Jabaliya camp, not far from the hospital where I and other internationals were staying to monitor the situation. Another 2 mosques in Gaza’s southeastern Khan Younis city were targeted. 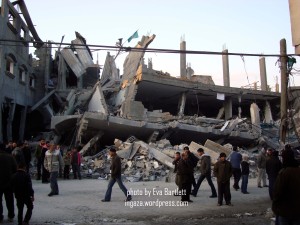 The first mosque, Emad Akal mosque, was leveled, killing 5 young girls, ages 4, 8, 12, 14, 17, and endangering the lives of a 1-week old baby, a 1.5 year old child, and countless other civilians living and sleeping in their homes next to the mosque when the F-16’s missile struck it, causing the walls and rooves of neighbouring homes and buildings to crumble, burying and pummeling people inside. 10s of homes have serious infrastructural damage, and 3 were completely destroyed. I see terror in many eyes, disbelief in many more (for although Gaza has been hit hard many times before, the scale, the immensity, and the seemingly undending longevity of this one are beyond words).

1:15 I’m interrupted: an explosion not far away. A second explosions seconds later, much closer, shaking the building again. And again the sirens wail.

But they are terrifying in that I know they are striking more civilian areas. Yesterday morning i spent 1.5 hours touring the ICU at Shifa hospital, seeing 10s of young and old men, and children, turned to living corpses, soon to die. They were the fourth shift of the first day of strikes.

Two further mosques in Jabaliya were targeted around 9 am, one minutes after the other.

In Jabaliya at the time when the Emad Akal mosque was hit, I was able to visit the site with first light. There, an uncle of the 5 killed children pointed to the corner where they had slept, where the roof and rubble caved in, burying and killing them.

Another neighbour toured me through the three neighbouring destroyed houses, and the many other seriously damaged houses. A construction block sized piece of cement drooped in plastic perilously over the pillow of where a family member had laid sleeping, saved only by the plastic between asbestos roofing and her head.

A man whose home was destroyed when the mosque was leveled asks me where he and his family are supposed to live now? He is, it turns out, a refugee from 1948, his family having lived in what is now Israel.

12:27 more strikes: in Zaytoun area, civilian injuries, in Bureijj camp at the entrance (a car or a building, not yet known), another attack in the northern areas…

…still more explosions are erupting every few minutes: a car in Al Bureijj camp, central Gaza, another hit in the Zaytoun residential area of Gaza City, another in the north…

… the appalling bombing that Israel is unleashing on us here in Gaza, since just after 11 am on December 27th continues at full strength, despite over 300 dead and over 800 injured, by conservative estimates (1000 by other estimates), not including the victims and casualties from the latest and ongoing attacks.

The outside world rightfully wants to know what is going on in Gaza, and I too want to know, even though I am here. Gaza has become isolated areas, where people are trapped in their homes for fear of being out on the streets. And, as it turns out, even homes are not safe. There is no where safe in Gaza. Any place can be a target. Any target can be justified as being a planned target or being closed to a planned target. As Jaber said, within the geography of Gaza, every place is within the range of a target.

But now Jaber has gone back to his office which, when we were there this morning, attempting to write an article, we evacuated because the owner of the building next door had received a threat, again from Israeli army commanders, that the building would be hit. The reasons? Because the house next to Jaber’s is the house of the family of the wife of a Hamas executive force member. And the targeted building next to the PCHR office is a hotel which now rents an office to a Hamas Minister of somethingorother.

Collective punishment. It has been the theme throughout Israel’s siege on Gaza which had already brought hospitals and the medical patients within and without to their knees, which has caused a poverty rate of 80%, meaning 80% of 1.5 million people need food handouts which Israel then has not allowed in consecutively since November 4 when it shut all borders except for the briefest of openings. 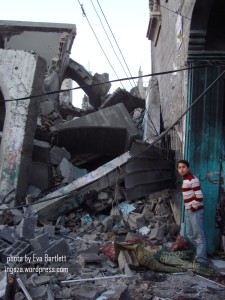 *houses next to mosque 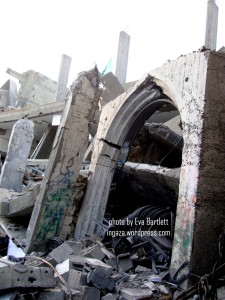 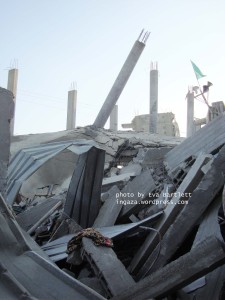 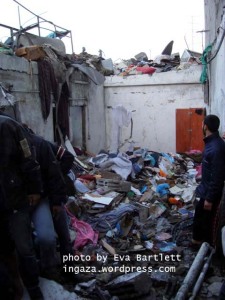 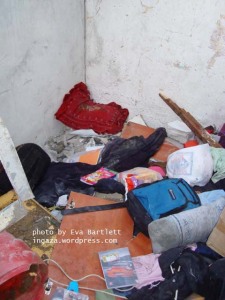 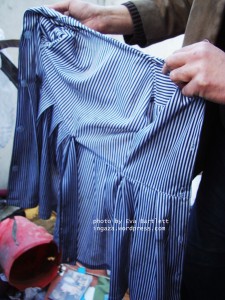 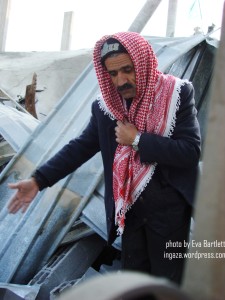 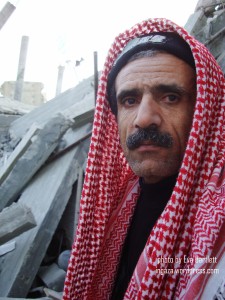 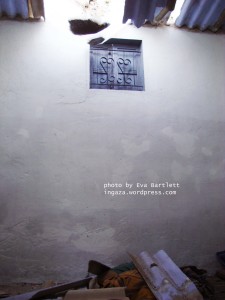 *spared by plastic: cement block which would have fallen on head of sleeping occupant 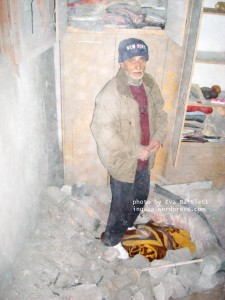 *buried beneath the rubble for one hour before pulled out 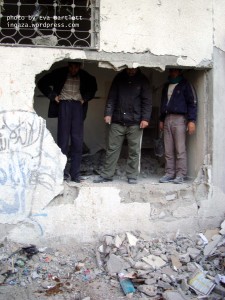 *home across the street, damage the wall, extensive damage within 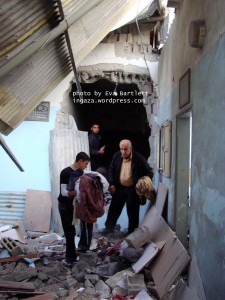 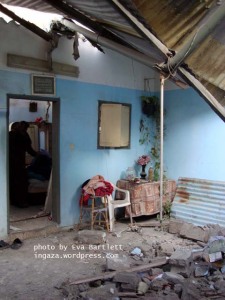 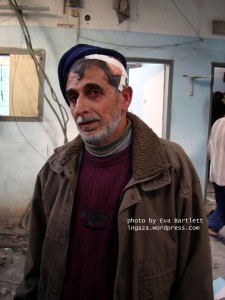