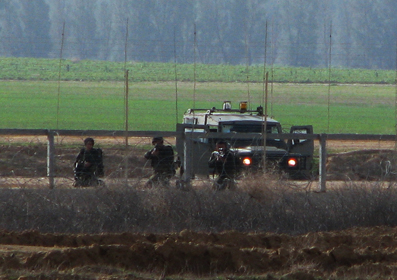 *Palestinian farmland in the southeast, just over a few hundred of metres from the border with Israel.

I was fairly certain that one of us would be shot today.

This morning, farmers from Abassan Jadiida (New Abassan), to the east of Khan Younis , the southern region, returned to land they’d been forced off of during and following the war on Gaza. The continual shooting at them by Israeli soldiers while they work the land intensified post-war on Gaza. The Israeli soldiers’ shooting was not a new thing, but a resumption of the policy of harassment that Palestinians in the border areas have been enduring for years, a harassment extending to invasions in which agricultural land, chicken farms, and the houses in the region have been targeted, destroyed in many cases.

Yusef Abu Shaheen, whose land was being harvested, explained that over the course of the year he invests about $54,000 in planting, watering and maintenance of the monthly crops. From that investment, if all goes well and crops are harvested throughout the year, he can bring in about $10,000/month, meaning that he can pay off the investment and support the 15 families dependent on the harvest.

The work began shortly after 11 am, with the handful of farmers working swiftly, cutting swathes of tall parsley and bundling it as rapidly as it was cut. These bundles were then loaded onto a waiting donkey cart. The speed of the farmers was impressive, and one realized that were they able to work ‘normally’ as any farmer in unoccupied areas, they would be very productive. A lone donkey grazed in an area a little closer to the border fence. When asked if this was not dangerous for the donkey, the farmers replied that they had no other choice: with the borders closed, animal feed is starkly absent. The tragedy of having to worry about being shot once again struck me, as it did when harvesting olives or herding sheep with West Bank Palestinians who are routinely attacked by Israeli settlers and by the Israeli army as they try to work and live on their land.

After approximately 2 hours of harvesting, during which the sound of an F-16 overhead was accompanied by Israeli jeeps seen driving along the border area, with at least one stationed directly across from the area in question, Israeli soldiers began firing. At first the shots seemed like warning shots: sharp and intrusive cracks of gunfire. The men kept working, gathering parsley, bunching it, loading it, while the international human rights observers present spread out in a line, to ensure our visibility.

It would have been hard to miss or mistake us, with fluorescent yellow vests and visibly unarmed–our hands were in the air.

Via bullhorn, we re-iterated our presence to the soldiers, informing them we were all unarmed civilians, the farmers were rightfully working their land, the soldiers were being filmed by an Italian film crew. We also informed some of our embassies of the situation: “we are on Palestinian farmland and are being shot at by Israeli soldiers on the other side of the border fence.”

For a brief period the shots ceased. Then began anew, again seemingly warning shots, although this time visibly hitting dirt 15 and 20 m from us. Furthest to the south, I heard the whizz of bullets past my ear, though to estimate the proximity would be impossible.

As the cracks of gunfire rang more frequently and louder, the shots closer, those of the farmers who hadn’t already hit the ground did so, sprawling flat for cover. The international observers continued to stand, brightly visible, hands in the air, bullhorn repeating our message of unarmed presence. The shots continued, from the direction of 3 or 4 visible soldiers on a mound hundreds of metres from us. With only my glasses I could make out their shapes, uniforms, the jeep… Certainly with their military equipment they could make out our faces, empty hands, parsley-loaded cart…

There was no mistaking the situation or their intent: pure harassment.

As the farmers tried to leave with their donkey carts, the shots continued. The two carts were eventually able to make it away, down the ruddy lane, a lane eaten by tank and bulldozer tracks from the land invasion weeks before. Some of us accompanied the carts away, out of firing range, then returned. There were still farmers on the land and they needed to evacuate.

As we stood, again arms still raised, still empty-handed, still proclaiming thus, the Israeli soldiers’ shooting drew much nearer. Those whizzing rushes were more frequent and undeniably close to my head, our heads. The Italian film crew accompanying us did not stop filming, nor did some of us with video cameras.

We announced our intention to move away, the soldiers shot. We stood still, the soldiers shot. At one point I was certain one of the farmers would be killed, as he had hit the ground again but in his panic seemed to want to jump up and run. I urged him to stay flat, stay down, and with our urging he did. The idea was to move as a group, a mixture of the targeted Palestinian farmers and the brightly-noticeable international accompaniers. And so we did, but the shots continued, rapidly, hitting within metres of our feet, flying within metres of our heads.

I’m amazed no one was killed today, nor that limbs were not lost, maimed.

While we’d been on the land, Yusef had gone to one end, to collect valves from the broken irrigation piping. The pipes themselves had been destroyed by a pre-war on Gaza invasion. “The plants have not been watered since one week before the war,” he’d told us. He collected the parts, each valve valuable in a region whose borders are sealed and where replacement parts for everything one could need to replace are unattainable or grossly expensive.

He’d also told us of the chicks in the chicken farm who’d first been dying for want of chicken feed, and then been bulldozed when Israeli soldiers attacked the house and building they were in.

My embassy rang me up, after we’d managed to get away from the firing: “We’re told you are being shot at. Can you give us the precise location, and maybe a landmark, some notable building nearby.”

I told Heather about the half-demolished house to the south of where we had been, and that we were on Palestinian farmland. After some further questioning, it dawned on her that the shooting was coming from the Israeli side. “How do you know it is Israeli soldiers shooting at you?” she’d asked. I mentioned the 4 jeeps, the soldiers on the mound, the shots from the soldiers on the mound (I didn’t have time to go into past experiences with Israeli soldiers in this very area and a little further south, similar experience of farmers being fired upon while we accompanied them.).

Heather asked if the soldiers had stopped firing, to which I told her, ‘no, they kept firing when we attempted to move away, hands in the air. They fired as we stood still, hands in the air. ” She suggested these were ‘warning shots’ at which I pointed out that warning shots would generally be in the air or 10s of metres away. These were hitting and whizzing past within metres.

She had no further thoughts at time, but did call back minutes later with Jordie Elms, the Canadian attache in the Tel Aviv office, who informed us that “Israel has declared the 1 km area along the border to be a ‘closed military zone’.”

When I pointed out that Israel had no legal ability to do such, that this closure is arbitrary and illegal, and that the farmers being kept off of their land or the Palestinians whose homes have been demolished in tandem with this closure had no other options: they needed to work the land, live on it… Jordie had no thoughts. He did, however, add that humanitarian and aid workers need to “know the risk of being in a closed area”.

Meaning, apparently, that it is OK with Jordie that Israeli soldiers were firing on unarmed civilians, because Israeli authorities have arbitrarily declared an area out of their jurisdiction (because Israel is “not occupying Gaza” right?!) as a ‘closed area’.

Israel’s latest massacre of 1,400 Palestinians –most of whom were civilians –aside, Israel’s destruction of over 4,000 houses and 17,000 buildings aside, Israel’s cutting off and shutting down of the Gaza Strip since 2006 aside, life is pretty wretched for the farmers and civilians in the areas flanking the border with Israel.

Last week, the young man from Khan Younis who was shot while working on farmland in the “buffer zone” was actually on land near where we accompanied farmers today. Why do Israeli authorities think they have an uncontested right to allow/instruct their soldiers to shoot at Palestinian farmers trying to work their land?

If Israeli authorities recognized Palestinian farmers’ need to work the land, Palestinian civilians’ right to live in their homes, then they would not have arbitrarily imposed a 1 km ban on existence along the border, from north to south. What gives Israel the right to say that now the previously-imposed 300 m ban on valuable agricultural land next to the order extends to 1 full kilometre, and that this inherently gives Israel the right to have bulldozed 10s of houses in this “buffer zone” and ravaged the farmland with military bulldozers and tanks. 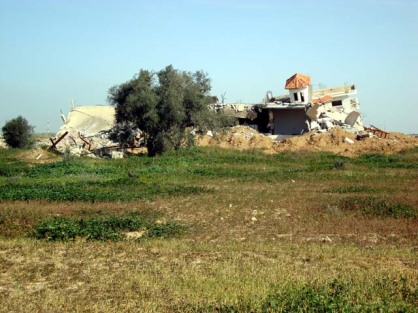 29 thoughts on “Canada okay with Israeli soldiers firing on unarmed Palestinian farmers, and us”