The US is fine with “rebels” like Al-Qaeda “protesting” in Syria, but when genuinely unarmed Palestinians protest the occupiers who violently expelled them from their homes and land, they are “inciting violence.”

During peaceful protests on March 30 in eastern Gaza, an unarmed Palestinian man walked on farmland towards the fence built by his occupiers. Within minutes, he was shot by one of the 100 Israeli special forces snipers deployed along the fence precisely to quash dissent—by any means necessary—under the old pretext of “self-defense.”

On the same day, a Palestinian woman, armed solely with a flag, walked towards the fence which has imprisoned her for so many years. She, too, was targeted by one of the snipers.

Among the 17 killed that day was a 16-year-old girl and a 27-year-old farmer, the latter killed by Israeli tank fire.

Even the BBC, which is not generally known to report fairly on Palestine, noted: “The first to die was Omar Samour, 27 – a Palestinian farmer killed in Israeli shelling as he worked his land near Khan Younis early on Friday, before the protests began.“

Yet, according to Israel, this farmer was a “terrorist infiltrator,” the lexicon which Israel uses to whitewash its extrajudicial assassinations.

Sputnik reports that the Israeli Army spokesperson proudly tweeted they knew “where every bullet landed,” but later deleted the tweet, likely because it was clear these bullets landed in the bodies of unarmed protesters.

In my three years living in Gaza, I frequently accompanied such demonstrations, and also did so in countless demonstrations when I stayed as an activist for eight months in the West Bank. Having experienced these first hand, I’m acutely aware that Israel has zero moral authority on conduct.

In the tens of demonstrations in the West Bank and Gaza which I accompanied, “violence” always began with the Israelis shooting live ammunition, lead bullets covered with a thin rubber layer, and suffocating tear gas at unarmed Palestinians. That Palestinian youths chose to respond with slingshot-spun rocks is entirely within their rights. But in my experiences, it was always Israel which began, shooting to maim and kill, kidnapping and imprisoning unarmed protesters.

On Land Day in March 2010, I joined one of six demonstrations that were held in the Gaza Strip. It was in Khoza’a village, east of Khan Younis. The four young Palestinian men targeted by Israeli snipers that day all reported being shot with live ammunition without any prior warnings, including one man shot in his head.

And as with the March 2018 Land Day demonstrations, Israel deemed the 2010 assault acceptable: “an investigation showed ‘soldiers operated in accordance with accepted dispersal procedures,’ in regards to the IDF violence against unarmed protestors.“

The “accepted dispersal procedures” of Israel occur on a daily basis throughout occupied Palestine, whether against unarmed protesters in Bil’in village near Ramallah, or against unarmed farmers—from children to elderly—in Gaza.

These procedures include firing on Palestinian civilians from remotely-controlled Israeli gun towers stationed along the fence enclosing Gaza. Israel also targets other civilians working in border regions, including children and youths collecting rubble and scrap metal for use in construction. 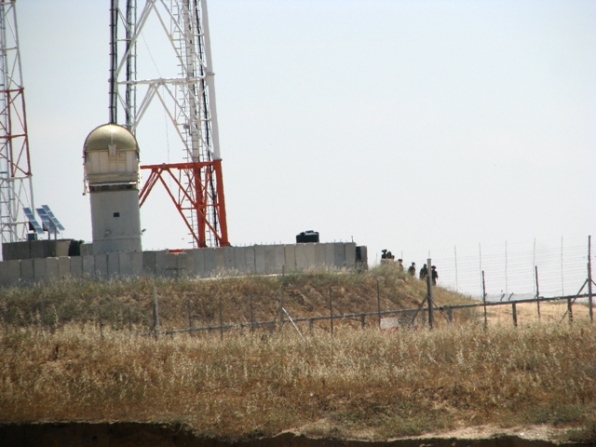 One of many remotely-controled machine-gun towers along fence enclosing Gaza. 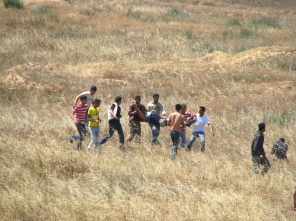 *Photos from my April 24, 2010 post after a nonviolent protest in which three were injured by Israeli fire with live ammunition.

Western media is reporting that the 2018 attacks on Palestinian protesters was the single bloodiest day in Gaza since the 2014 “clashes.” The lexicon of “clashes” – used to refer to Israel’s brutal summer 2014 bombardment of Gaza, and also the recent Israeli assassinations of civilians in protests – is corporate media’s typical distortion of reality and of the balance of power. When unarmed protesters calling for human rights are literally gunned down, these are not “clashes,” these are assassinations.

Further, this negates the near-daily Israeli targeting of Palestinian farmers, fishers, and people working in the border regions. This including sniping at and shelling women, elderly, and children.

In the farmer accompaniment work I did in Gaza, many Israeli soldiers fired live ammunition at and around farmers, myself and other volunteers, at close proximity, in an effort to aggress and frighten farmers off of their land. Israel’s policy of attacking Palestinian farmers and fishers is a part of their larger policy of rendering Palestinians utterly dependent on inadequate food aid and utterly, needlessly, impoverished.

In 2011, I wrote about the Israeli destruction of Palestinian agriculture in Gaza, noting:

“A decade later, those orchards bulldozed by Israeli bulldozers, farmers now struggle to access land in some areas up to two kilometres along the 300 metre buffer zone violently rendered off-limits by the Israeli soldiers.

“Over 30 percent of Gaza’s agricultural land is not worked on because of the buffer zone. This is Gaza’s more fertile land, where olive, fruit, citrus and nut trees once flourished, along with wheat, barley, rye and other crops, providing much of Gaza’s needs.“

“I do not need to tell the world how cruel the Israeli Army is. We can see what this terror state is doing by looking at the situation in Gaza and Jerusalem. Israel has carried out a massacre in Gaza and Netanyahu is a terrorist.“

While I happen to agree with this statement, it is particularly ironic that it comes from the leader of a state that is warring on Syria, has given safe passage, and weapons, to terrorists entering Syria, and has in recent months killed hundreds of civilians in northwestern Syria.

Since late January, Turkey has been bombing Afrin, northwestern Syria. The latest casualty count I have found was 222 civilians murdered and 700 injured as of March 10, 2018. A later report states, “more than 1000 civilians martyred and injured,” thousands displaced, by the Turkish bombings.

Then, of course, there is Israel’s direct support to terrorists in Syria, including treating terrorists from the FSA to al-Qaeda in Israeli hospitals.

Thus, both Israel and Turkey have civilians’ blood on their hands, and neither has been held accountable.

No justice has ever come to those civilians maimed, murdered, imprisoned by Israel. Nor has any international body truly pushed for justice. Weak words, quickly forgotten, are not the pursuit of justice and accountability of the perpetrators of crimes.

Absent the outrage which UN bodies and representatives reserve almost exclusively for war propaganda and whitewashing terrorists in Syria, UN Secretary-General António Guterres blandly offered his “thoughts” to the families of those murdered by Israel. He called for “an independent and transparent investigation into these incidents.” Just who would do such an investigation? Israel? The UN?

The UN assistant Secretary-General, Tayé-Brook Zerihoun, described the day of slaughter as having “devolved into violence at several locations across Gaza.” Seventeen unarmed Palestinians murdered by elite Israeli snipers is not “devolving into violence,” it is slaughter. Premeditated slaughter, at that.

We can expect precisely zero action or justice via the UN, when such a massacre is downplayed, and when prior Israeli massacres of Palestinians have never been held accountable by the UN or by the state which the UN routinely requests look into its own murdering.

At that same UNSC meeting, America’s UN delegate, Walter Miller, had the gall to put the blame on Palestinians. Miller described Palestinian civilians as: “Bad actors who use protests as a cover to incite violence [and] endanger innocent lives.“

America is fine with “rebels” like Al-Qaeda “protesting” in Syria, but when genuinely unarmed protesters in Palestine exercise their right under international law to protest the occupiers who violently expelled them from their homes and land, they are “inciting violence.” The hypocrisy of America and the UN never ends, and as a result, the violence of Israel will never end.

While Turkey cries crocodile tears for Palestinians, Israel pretends to be the most moral army in the world, and the UN turns endless blind eyes to Israel’s war crimes and ethnic cleansing of Palestinians, Palestinians continue to bravely protest the crimes of Israel.

As Gareth Porter tweeted, “many 1000s of Gazans are ready to die as martyrs rather than submit to Israel’s policy of slow death; Israeli snipers will continue 2 kill Palestinian demonstrators in cold blood; US gov’t & news media have given Israel a green light.“

Indeed, the UN, corporate media and world leadership may, and do, ignore or vilify them, but Palestinians keep standing up to the most immoral military and government in the region.

-the hardest jobs: children working in areas targeted by Israel, March 3, 2010, In Gaza