On the morning of 4 May 2009, “israeli” troops set fire to Palestinian crops along Gaza’s eastern border with “israel”. The Palestinian Centre for Human Rights (PCHR) reported that 200,000 square meters of crops were destroyed, including wheat and barley ready for harvest, as well as vegetables, olive and pomegranate trees.

Local farmers report that the blaze carried over a four-kilometer stretch on the Palestinian side of the eastern border land. Ibrahim Hassan Safadi, 49, from one of the farming families whose crops were destroyed by the blaze, said that the fires were smoldering until early evening, despite efforts by the fire brigades to extinguish them.

Safadi says he was present when “israeli” soldiers fired small bombs into his field, which soon after caught ablaze. He explained that “The israeli soldiers fired from their jeeps, causing a fire to break out on the land. They burned the wheat, burned the pomegranate trees … The fire spread across the valley. We called the fire brigades. They came to the area and put out the fire. But in some places the fire started again.” According to Safadi, he lost 30,000 square meters to the blaze, including 300 pomegranate trees, 150 olive trees, and wheat.

In the border areas it has long since become nearly impossible to work on the land due to almost daily shooting from the Israeli soldiers. The crops that were burned on 4 May were dried and ready to harvest, meaning that they were extremely flammable.

“It took only three minutes for the fire to destroy 65,000 square meters,” said Nahed Jaber Abu Said, whose farmland lies a few kilometers down the road from Safadi. He added that “It was nearly 9am. I was here when the Israeli jeeps came. An Israeli soldier at the fence shot an explosive into our field of wheat. It went up in flames immediately.”

Safadi said that the arson attack was the third major time his farm has suffered from an “israeli” attack. In previous attacks over the last decade, he explained, “israeli” soldiers bulldozed his land, razing his lemon, olive and clementine trees as well as demolishing greenhouses.

“We’ve suffered great losses. The israeli soldiers have destroyed so much of our land, trees and equipment. They’ve cost us a lot of money,” he said, citing cumulative losses of $330,000 since 2000 when the heightened invasions began. In the last attack, Safadi said that $130,000 worth of crops, trees and irrigation piping was destroyed.

On top of the destruction, Safadi complains of not being able to replace destroyed items like the plastic hosing used to irrigate his fields. These, along with fertilizers and machinery replacement parts, are banned from entering Gaza due to the Israeli-led and internationally-backed whole-scale siege of the territory.

Abu Said reports losses of $2,000 on one patch of his land alone. “This isn’t including the land closest to the border fence,” he said. “I’m so sad now, what can I do?”

His experiences also extend beyond the 4 May attacks, and beyond the loss of land. In 2008, “israeli” soldiers shot and killed 11 of his sheep and seriously injured a 15-year-old cousin, Jaber, by shooting him in the mouth.

Attacks by “israeli” soldiers occur on a near-daily basis along Gaza’s borders. Nearly a decade ago, “israel” unilaterally imposed a “buffer” or “no-go” zone solely on the Gaza side of their shared borders. According to the Food and Agricultural Organization (FAO) and the Palestinian Agricultural Relief Committee, the initial 100-meter “off-limits” area has now extended to one kilometer across much of Gaza’s eastern border and two kilometers along the Strip’s northern border. FAO further reports that roughly one-third of Gaza’s agricultural land lies within the confines of the “buffer zone.”

Since the 18 January ceasefire, three Palestinian civilians, including one child, have been killed in the “buffer zone” area from shooting and shelling by “israeli” forces. Another 12 Palestinians have been injured, including three children and two women, due to “israeli” fire along the border.

In addition to the physical threat and the destruction of agricultural land and equipment, Gaza’s farming sector is further devastated by the destruction of what is believed to be hundreds of wells and sources of water and the contamination of farmland due to “israel”‘s invasion of Gaza at the beginning of the year. As reported by the Guardian newspaper in February 2009, these attacks have left nearly 60 percent of Gaza’s agricultural land useless.

The consequences of the active destruction of Gaza’s farming sector are amplified within the context of Israel’s siege and the stagnant state of rebuilding efforts since the ceasefire. With only a trickle of aid entering Gaza and poverty and malnutrition rates soaring, the ability to produce food is all the more vital to Palestinians in Gaza. 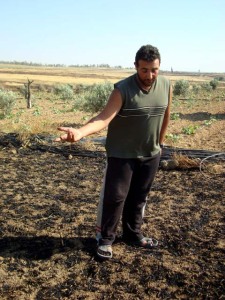 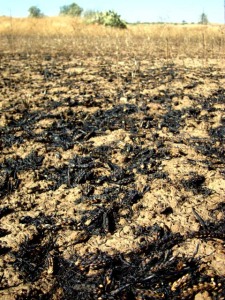 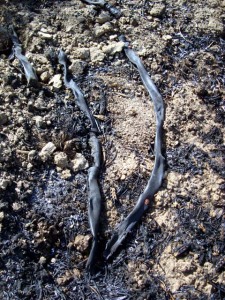