*smoky haze from intense Israeli shelling on Jabaliya and around, 15 January, 2009

“If this thing doesn’t stop in another week, some of them will die. And they know it,” A said about the war on Gaza, as we looked at a photo I’d taken of Saber today. I’d thought the same thing earlier, when I said “yatiek al afia” to each medic climbing into their ambulances. They’d gotten ‘coordination’ to go to one of the many areas within Gaza that the Israeli military has invaded, taken-over, and prevented medics from reaching for nearly 2 weeks now. The coordination process is a joke, necessitating the Red Crescent to ask the Red Cross to ask for Israel’s permission to pick up those the Israeli army has killed or injured, or terrified into hiding in their homes, or even locked into their houses and abused, shot, or shelled, as with one testimony from Ezbet Abed Rabbo and another from Zaitoun.

As we looked at photos of his 4 pretty little daughters, Saber -tall, kind of goofy-friendly, and unquestionably dedicated to his task like the other medics and drivers -didn’t let on that his home had been destroyed two days ago, during the evening. He showed me his prize girls, beaming with adoration, and a couple of random video clips about cobras, a snake fascination he seems to have. He was holding a bag and looked ready to go somewhere eventually, so I asked. “Home,” he answered, but not to his house. He and family were staying with his sister since his house was hit 4 times by tank shells, ravaged and burned leaving nothing to return to, he told me matter-of-factly, no dramatizing.

It was only around 9 am still, and as I stood talking with Saber and some of the other volunteer-medics, in between runs, I watched women come in, large platters of bread dough on their heads, expectancy in their eyes. Their power had been off, was still off, and they needed to bake bread for their extended families. One determined woman pleaded with, then scolded, a medic nearby to let her plug into the hospital electricity, so desperate to cook the dough, knowing this was the only place she might find electricity in her region. Cooking gas was, of course, out of the question.

I’d seen women cooking bread the other morning, was pleased that at least they could come here to bake. But the hospital was running on a generator this morning and wasn’t accepting any extra demands for its electricity. The women walked away, dough platters on heads.

Then it was a gas run to Gaza city, going to one of the few depots that stand the best chance of re-fueling the ambulance, though the first we tried the other day when we went was fuel-less, as was the second. At a slowed pace on a Gaza street, I see a taxi filled with people, two kids half out one back door window, looking up at the sky, scouring for zenanas (drones). Heads are inevitably turned up these days, the sounds of F-16s–which we’d ignored a month ago when they were just ‘practising’ –now very real causes for alarm, caution, and panic.

Back in Jabaliya, we maneuver at a comfortable pace –thankfully we’re not on an emergency run –through the impossible: rubble-filled roads from the recently destroyed homes, shops, and mosques…

We stop briefly near the home of Marwan, one of the medics, and while he goes inside quickly, I watch the neighbourhood residents fill plastic jugs with water. No one has running water, and it’s only by grace of the public storage unit that people are able to re-fill. I think of the many, many people in the areas controlled and isolated by Israeli soldiers. No water. No gas. No electricity. The same theme as during the siege (on-going) but now with the added lethal element of Israeli missiles, soldiers and snipers picking off those who go out of their homes, and those inside. I’ve heard enough testimonies.  People scramble to get done important tasks like bringing water back to the home while it is still light, not because of sight problems but because of sniper and shelling problems: anything moving at night is a target, is the sentiment all over Gaza, with good reason.

And then we’re off, sirens blaring as we head to Old Gaza street in Jabaliya. It’s 11:30 and the dispatcher has just gotten a call to pick up someone killed, possibly by a drone’s missile. We arrive minutes too late, a car has already whisked the body parts away. But there is a second, and we drive a few minutes to a different site where a similar scenario has played out: a missile strikes outside a small house in a heavily-populated area. A woman, around 35 years old, is killed. A family member comes out of the home after a minute to see if anyone has been injured. Minutes later she is struck by the second, inevitable, missile. As was the case with the young man from Sheikh Rajleen the other day, as was the case all over the Gaza Strip.

When we arrive, the husband is wailing, a shrill woman’s wail of grief. He is also helping to collect the white plastic sheet holding his wife’s many shredded body parts. He focuses on the task, then breaks out in wails. They step over the corrugated tin that might have been a roof or a wall, and as the body is taken away on a stretcher, the pool of her blood remains to violently remind her husband of her death.

His grieving is non-stop, in the ambulance and at the morgue where we must usher another grieving group out in order to make room for our arrival. The husband can’t take it, sobs against a steel door as the morticians make room for this latest arrival.

I can’t take it either, though now I’ve seen more bodies with their lives stolen from them than I ever could have imagined, and many more on the way down that road. His wail is stuck in my head, neither the siren nor the medics attempts to distract can put it out of my head. She was in her home, came out because her relative was assassinated just outside her back door. Their property, morning time, civilians, women, the 1000 plus victims… It is once again beyond comprehension.

We arrive back at the hospital and Arafa’s father is there for some reason. I sit and listen as he talks about his son and how we had worked together the night before he was killed, how he remembers I stayed up with Arafa and others, that I’d met his wife and kids and seen where his house lay. He recalls these things, very vivid on my own mind. And when I later learn of the potential coordination for the ambulances, I’m divided. It is absolutely necessary that the ambulances reach these areas which have been so isolated from medical care, food, water, eyes and cameras. Yet I know that the dangers they face mean that many medics say some extra prayers when going out to these areas. And so I say a fond, but trying to be positive, goodbye, a see-you-soon. But I’m anxious and want re-assurance that none more will end up like Arafa. 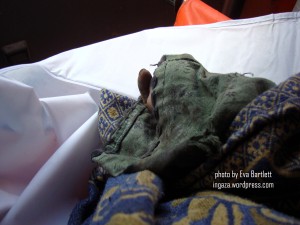 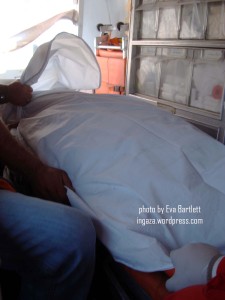 *transit in one of the few working Red Crescent ambulances in Jabaliya region. Rear and side windows blown out, covered with opaque plastic.

**Kiffah Lum Towwak, 35, killed by Israeli missile strike on her backyard in Jabaliya, just after 11 am.  The strike which killed Kiffah came about 5 minutes after the initial strike which killed a family member living in the same house.  As the ambulance loaded her body and started to drive away, a young man from the family leaned in to throw a mangled body part, wrapped in cloth, onto the pile of pieces that was Kiffah. Her husband grieves shrilly, anguished.

19 thoughts on “Updates from runs with medics; grief of husband of drone-struck woman”