Traveling with a friend by bus to Homs Monday, we go to an area of Damascus where buses line the side of the road. “Halab, Halab (Aleppo),” are the first calls. Then Hassaka, Raqqa… and eventually Homs.

The Greyhound-sized bus is filled with passengers, most traveling on to Hama. A long three and a half hours and a number of military checkpoints later, we get off the bus in the outskirts of Homs. A taxi ride takes us to one of the hardest-hit areas, Hamidiyeh, a largely Christian area in the heart of the Old City.

The expected wreckage and destroyed houses is wide-spread. The armed groups—who took control of much of the Old City in February 2012—have been gone for a month, since the May 9, 2014 truce evacuation was implemented. Now, instead of the sniper fire and shelling of armed insurgents and the Syrian Army’s fire against them, there is a quiet marred only by people sweeping rubble from their homes, the uncannily-serene tweeting of birds, and cars passing through now and then.

On the second floor of a damaged building, a man shoveling debris off the ledge onto the street below pauses to greet me, surprisingly cheerful, as though his city had not for the past two years been ravaged by the insurgents.

An older man kneels re-paving small patches of the relatively unscathed walkway outside of his likewise-intact home. Down the street, four men hose down the entrance and street outside of one of Homs’ oldest hotels, also comparatively unmarred.

We visit a number of churches, all of which were at least a century old (some much more), in various states of disrepair.

In the courtyard of one church—thoroughly burned inside—a newly planted flower bed adds beauty and hope in a city which has seen the opposite for so long. 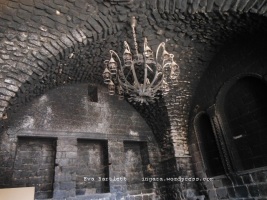 Youth volunteers sweep away rubble and debris in some of the churches we visit, elsewhere beautifying Homs’ streets anew with floral paintings (often covering graffiti left by the armed insurgents) and colourful mosaics of broken church glass.

A blown-out wall in a lane-way reveals both a destroyed-pickup truck and the school beyond, which insurgents occupied until the day of their departure from the Old Homs’ neighbourhoods. The bombed truck is but one of many of the terrorists’ bombings in their final days occupying the Old City. 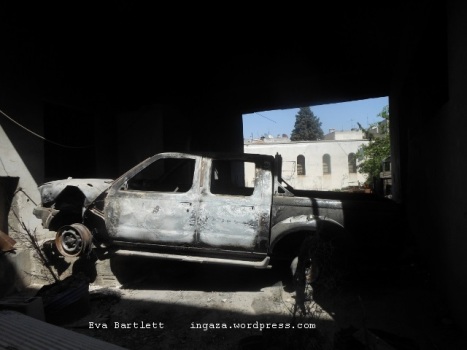 “They had anti-aircraft machine guns which they would put on the truck for their attacks. They burned them the day they left,” my friend tells me. He also tells me that the armed insurgents left surprises in creative places for the home-owners. “They left booby-trapped explosives in the houses, all over, even behind paintings on the wall.”

At the Jesuit church where Father Frans van der Lugt lived, in Syria since 1966, I talk with a man who was a close friend of the priest who was in April assassinated point-blank. He talks about the time before Frans’ murder, how Frans provided a sanctuary for people, even day-visitors like him. “I’d spend the day here and just go home to sleep and shower,” he says.

As I’m going to be writing about this, I won’t go into too much detail here, but the church courtyard now hosts Frans’ grave, in a garden area surrounded by some trees and bright flowers, and a large guest book already has many signatures, locals who knew the priest or others who knew of his work and truth-telling on Syria.]

[read: An Eyewitness to the Syrian Rebellion: Father Frans in His Own Words

One telling excerpt from this article:

In the same letter, Father Frans insisted that what was occurring in Syria could not be described as a “popular uprising,” since the majority of Syrians do not support the opposition and “certainly not” its armed component.

[On that note, see recent articles: “Elections in Syria: The People Say No to Foreign Intervention” and “Why Do Syrians Overwhelmingly Support Their Government?”]

The fact is that the government could never have survived three years of war without the support of the people. It needs a loyal populace in order to maintain order and provide for national defense. This is why, unlike the opposition, the government has worked hard to win the hearts and minds of the people and to provide for their welfare. During the last year, it has even cautiously offered amnesty to exhausted opposition Syrian fighters (but not their foreign allies) as a means of retiring them from combat, Assad’s newly declared prisoner amnesty is part of the same strategy, as well as an affirmation of confidence in its success. 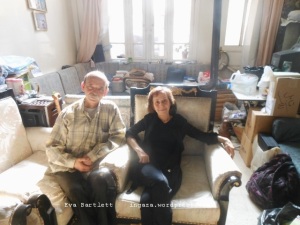 Further along an Old City street, we visit Aymen and his sister Zeinat, both survivors of the terrorizing of the “revolutionary” food-stealing, valuables-looting, armed men in Homs’ Old City. Weathering the two years of their presence, the complete looting of their food supplies (“we had enough stored food to last us a year, if not more”), they survived the final 50 days before the terrorists left eating only whatever greens they could gather—flavoured by spices… until a scavenging “revolutionary” took even that from them.

At one point I mistakenly assume they’ve been forced to stay, forbidden from leaving as is the case in other areas held by anti-Syria armed men. “No, no one forced us to stay,” says Zeinat. “We wanted to stay, to protect our house,” Aymen says.

But more surprising than their having chosen to stay despite those who were looting them to the point of starvation…is their feisty energy, and their beaming smiles.

Zeinat, a pharmacist, and Aymen, a chemical engineer, talk with us for a couple of hours, recounting their story from the entrance of the armed groups into the Old City to their exit [I’ll also write about their experience shortly].

Back at my hosts’ rented home in a different area of Homs, they show me photos and videos of their own ravaged home, footage which Abu Abdu took himself. He meticulously points out how not only did the “revolutionaries” occupying their home utterly trash and destroy it, but they thieved every conceivable thing from it. “Here, they took the motor to the washing machine. Here, they stripped the fridge of its motor. Here, they took the taps in the kitchen. They stripped the electrical wiring.” Basically, they took anything that could be ripped out of wall or floor that could in any way be sold: metals, piping, wiring…and of course all of the family’s jewelry and valuables.

In the video he shows, the bedrooms are so trashed and a hole has been knocked into a wall for passage to the next apartment… you’d think the IOF had been here instead of the “freedom-loving revolutionaries”.

Theirs is but one apartment in a three level, at least 6 apartment-long building, many of which are equally tarnished from the photo he shows.

In the evening, our hosts mention there’s another party in progress, celebrating (still) the election 6 days prior. So we go. From blocks away the music is blasting, a street party which I’d mistake for a Gaza-like wedding party if I hadn’t already been told otherwise.

In the street block where the party rages, a low stage hosts local dignitaries: local sheiks, politicians, tribal leaders. On the street, a mixture of teens, youths, off-duty soldiers, and older men dance to various tempos of dabke. Some are the slow dabke procession which the elders tend to join in, slow-stepping, hands-joined, in a circle. Most are the lively dabke songs which have young men and soldiers alike hopping. I find the presence of these soldiers amidst the clearly joyful civilians another important statement of the respect most Syrians have for their army, who they see as protecting them from armed groups who have been sniping, car-bombing, mortaring them. 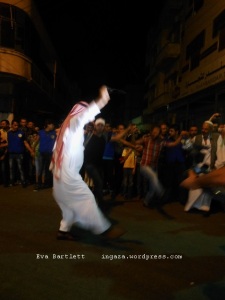 The “ya Bashar” song plays a couple of times, along with other patriotic songs, and there is more cheering and flag waving. Stepping out of the circle of dabke and revelry, walking into the powerless dark of the night, we leave this quarter of Homs to their celebrations.

With great sadness I read of the June 12 car-bombing in a Homs neighbourhood. SANA news reported:

Seven citizens were killed and 55 others got injured as a terrorist car bomb went off in Homs city.

…terrorists detonated a car bomb parked in Wadi al-Zahab neighborhood. …the explosion killed 7 citizens and injured 55 others, in addition to huge material damage.

Last May, terrorists blew up two car bombs in al-Zahraa neighborhood in Homs, killing 10 citizens and wounding some 42 others.

Earlier, 12 citizens were injured when a car bomb went off under the Homs Refinery Bridge on the way between Homs and Tartous provinces.

A video posted on FB shows scenes from Homs post-car bombing, as do photos below, from SANA news. This is the “revolution” being funded, supported and applauded by the West and corrupt Arab states.

18 thoughts on “Homs: “We wanted to protect our house””